Shares of Advanced Micro Devices (NASDAQ:AMD) have exploded since last summer, driven by rising optimism that a long-awaited turnaround is finally here. The stock is up an astounding 330% since this time last year, giving investors who stuck it out an incredible return. 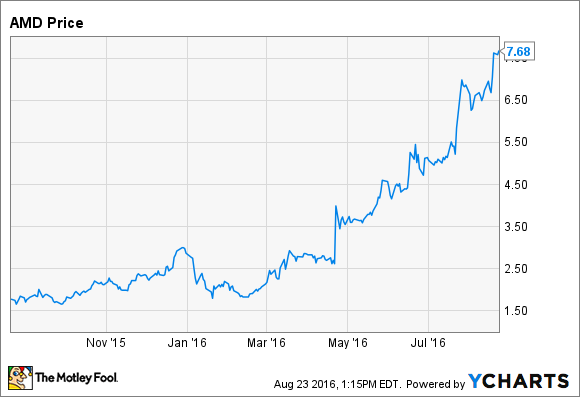 These gains have been driven not by improving results but the expectation that they will improve in the future. AMD launched a brand new line of graphics cards, Polaris, earlier this year, and it plans to begin shipping in volume its upcoming Zen CPUs in 2017. Both AMD and the market predict that these new products will drive market share gains, from NVIDIA (NASDAQ:NVDA) in the graphics card market and from Intel (NASDAQ:INTC) in the PC and server CPU markets.

There's only one risk that really matters at this point for AMD investors, given the circumstances: It's that Polaris and Zen will fail to deliver on their promises.

Over the past few years, AMD went from a strong player in the graphics card market to an also-ran. Its unit market share slumped from around 40% in 2014 to just over 20% today as NVIDIA won customers with its disruptive GTX 900 series.

AMD has been slowly clawing back market share over the past few quarters, but the company needs something big in order to jump back to where it was two years ago. Polaris, a line of graphics cards aimed at the high-volume mainstream portion of the market, has the potential to reverse AMD's fortunes in the graphics card market. But NVIDIA won't give up its own gains without a fight.

The first Polaris card, the RX 480, launched to good reviews with its $199 to $239 price point representing an aggressive play at the mainstream graphics card market. It only took a few weeks for NVIDIA to respond, launching the $249 GTX 1060 in July, with a $199 version launched earlier this month. The cheaper version is aimed directly at the lower-end RX 480, while the more expensive version delivers better performance for a slightly higher price.

AMD has since launched two lower-end Polaris graphics cards, the RX 470 and RX 460, and NVIDIA has yet to respond with low-end cards of its own. But the main takeaway is that AMD's Polaris, while competitive with NVIDIA's new Pascal graphics cards, isn't the kind of disruptive product that makes for guaranteed wins. Getting back to a 40% unit market share is likely going to take a lot longer than the market seems to expect, creating the risk that AMD's results won't be good enough to justify the now higher stock price.

AMD expects to begin shipping its Zen CPUs in volume next year, and it recently released benchmarks suggesting that the eight core PC version of the chip will be able to go toe-to-toe with Intel's best. There are a lot of problems with AMD's numbers, as pointed out by Anandtech, so we'll have to wait for independent third-party tests before having a good sense of where Zen truly stacks up.

Like with Polaris, the big risk for AMD is that Zen fails to win the strong market reception and corresponding demand that investors expect. Zen is supposed to fix the mistakes that AMD made with its current generation of CPUs, which suffer from lackluster single-threaded performance compared to Intel's products. The performance gap between the two companies will certainly narrow, aided by AMD's move to a 14nm manufacturing process -- but it may not be enough.

It's important to remember that AMD is competing with Intel, a company that has far greater resources, a near-monopoly in the server CPU market, and a dominant share of the PC CPU market. Zen being a massive success for AMD is not a foregone conclusion, although the market is pricing the stock as if it is.

With AMD stock more than quadrupling over the past year despite the fact that the company is still posting net losses each and every quarter, there's a chance that expectations have diverged from the results the company is likely to deliver. I could be wrong, of course, and both Polaris and Zen may be so successful for AMD that the current stock price proves to be pessimistic. But betting on a best-case scenario is a risky gambit. Anything short of perfection will lead to trouble for investors.