Less than a year after scrutiny of stratospheric drug price increases led to a biotech stock bloodbath, Mylan NV (NASDAQ:MYL) is on the hot seat for a string of double-digit price increases on its commonly used EpiPen. Mylan increased EpiPen's price by 15% in the fourth quarter of 2015 and hiked it by another 15% earlier this year.

Those double-digit jumps have drawn widespread criticism from politicians, including presidential hopeful Hillary Clinton, who argued against predatory drug pricing last year. On Wednesday, Clinton called on Mylan to change how it prices EpiPen, and on Thursday, Mylan responded with an entirely new pricing scheme for the life-saving medicine.

The path to EpiPen becoming a must-have item in patient purses and school nurse offices was paved by millions of dollars in marketing spending to raise awareness of the risk of anaphylaxis and the benefits of EpiPen.

Although EpiPen, which delivers a life-saving dose of adrenaline, has been around since 1980, demand picked up only after Mylan bought the rights to the medicine in 2007 and initiated its marketing and lobbying campaign.

Mylan's efforts paid off with increasing allergy testing and laws passing in 47 states regarding the stocking of adrenaline devices in schools, and while greater availability of these devices has been a win for patients, it's also provided significant pricing power for Mylan, which faces little competition in the market.

Sanofi's exit may have factored into Mylan's recent price increases. However, it doesn't explain Mylan's long history of price increases on the medicine. Since acquiring it in 2007, EpiPen's price has marched from less than $100 for a pair of EpiPens to $600 today. For comparison, a pair of EpiPens would cost about $122 today if its price had increased by 3% annually, a rate roughly in line with inflation over time.

A flood of cash

Over the years, EpiPen's price hikes have been a boon to Mylan's top and bottom lines. Annual sales grew from $200 million in 2007 to over $1 billion last year, and leveraging that revenue growth against fixed costs has resulted in Mylan's gross profit expanding from less than 40% in 2009 to about 45% today. According to Bloomberg, earnings from EpiPen accounted for 40% of Mylan's operating profit in 2014 alone. 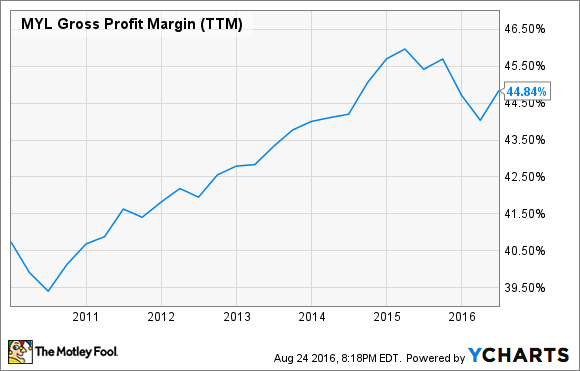 The top and bottom lines haven't been the only beneficiaries of EpiPen's success, either. CEO Heather Bresch's compensation has achieved new heights since Mylan bought EpiPen. Her total compensation was $2.45 million in 2007 and $18.9 million last year -- a 671% increase.

Mylan's soaring CEO pay is especially frustrating to patient advocates, who argue that Mylan's management is price gouging. The EpiPen hasn't changed much over the years, a point they say suggests that Mylan's pricing decisions have been due to EpiPen's marketing might, not product innovation.

That point was hammered home earlier this week by Clinton, who took to Twitter to address the EpiPen fiasco.

Clinton called on Mylan to roll back its price increases in a statement on Facebook and she reminded voters about her plan to rein in drug costs. Her proposals include denying tax breaks for money spent on direct-to-consumer ads, capping patients' monthly out-of-pocket drug costs, and allowing patients to import drugs from developed markets, where they cost considerably less. For example, a single EpiPen costs $112 at Canada Drugs, an online pharmacy, and roughly $66 at LloydsPharmacy in Great Britain, based on current exchange rates.

Under pressure from Clinton and facing the prospect of defending its pricing decisions on Capitol Hill, Mylan responded by announcing changes to its various EpiPen patient support programs.

Mylan is offering a $300 coupon that can be used by uninsured and underinsured Americans to lower their out-of-pocket costs when their insurance doesn't cover EpiPen. They're also expanding their patient assistance program to 400% of the federal poverty level from 200% so that more middle class families qualify for free EpiPens. According to Mylan, a family of four earning up to $97,200 won't pay a nickel to buy their EpiPen under this program. Additionally, Mylan is going to initiate a buy-direct program that allows patients to avoid pharmacy markups.

The response significantly addresses EpiPen price complaints. However, it does nothing to address a system of drug pricing that is flawed at best and broken at worst. Mylan's changes may allow it to slowly move out of the spotlight, but until more comprehensive solutions are found, it's unlikely that this will be the last we hear about runaway drug prices.