Ambarella has rebounded from its 52-week low of about $33, but remains down nearly 25% over the past 12 months. The rebound wasn't attributed to big improvements in sales or earnings, but rather CFO George Laplante's statement in early June that the action camera market could recover "in the second half of the year." 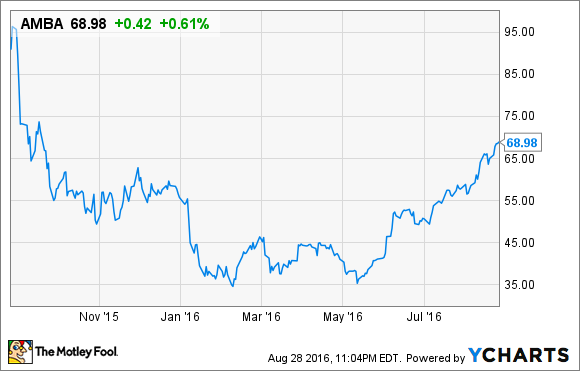 A key sales driver for the second half will be GoPro (NASDAQ:GPRO), the biggest action camera maker in the world. GoPro's introduction of low- to mid-range cameras and the ice-cube sized Session last year didn't impress shoppers, and their weak sales weighed down Ambarella's quarterly revenue. 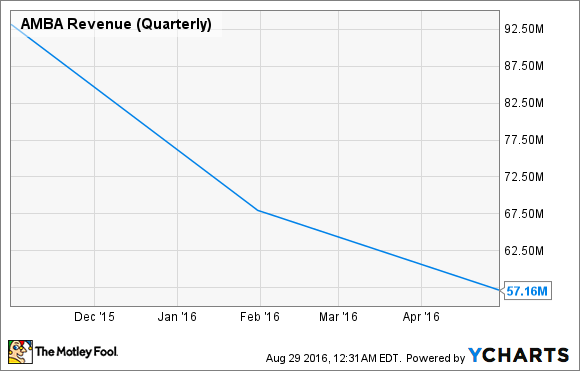 But this holiday season, GoPro is expected to launch its new Hero 5 flagship cameras and the long-awaited Karma drone. Those new products should lift Ambarella's top line, since Pacific Crest estimates that GoPro orders will still account for roughly 25% of Ambarella's revenues this year. Analysts currently expect Ambarella's sales to fall 3% this year, but possibly rebound 19% next year.

Ambarella doesn't disclose exactly how much revenue comes from sales of SoCs for each of type of camera, but it's generally accepted that action cameras account for most of its business. We know that sales of its SoCs for cameras accounted for 97% of its top line last year, while sales of infrastructure solutions declined significantly over the past three years. 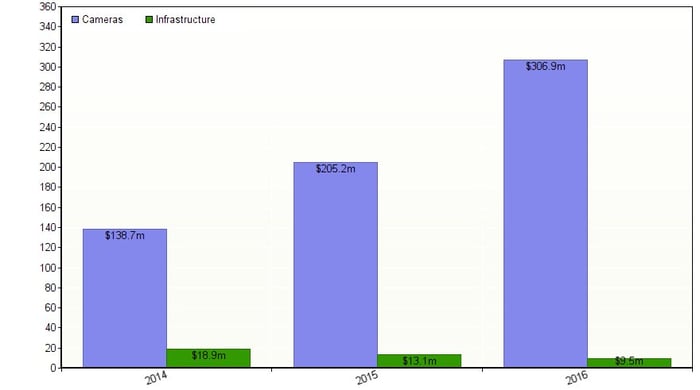 Ambarella notes that the weight of different types of cameras on its top line shifts over time. For example, orders from pocket video camera makers accounted for 40% of its total revenue back in fiscal 2011. That percentage fell to 0% by 2013 as smartphones rendered pocket video obsolete, but the decline was offset by growth in action cameras, security cameras, in-dash cams, and drone cameras.

Ambarella generates most of its revenue from Asia, particularly from contract manufacturers in China and Taiwan. Over the past three years, that dependence has increased, and exposes Ambarella to unfavorable currency headwinds.

5. Gross margins are under pressure

At the end of fiscal 2016 (Jan. 31, 2016), Ambarella predicted that its gross margin would "decrease over the next twelve months" as its lower-margin security and consumer IP camera markets grew as a percentage of its total revenue.

That statement was troubling, because analysts noted that Ambarella was facing tougher competition in those markets from cheaper Chinese rivals. That pressure has been evident over the past few quarters. 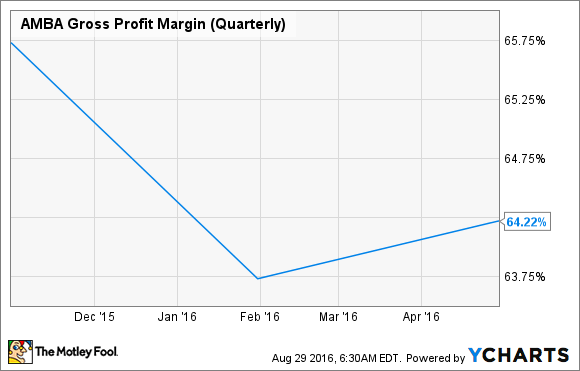 Ambarella's gross margins don't look terrible, but its operating margins certainly do. That's because its expenses have been rising across the board. 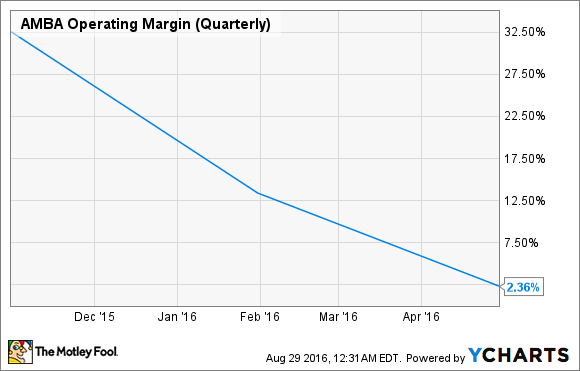 R&D expenses rose 48% year-over-year last quarter, SG&A expenses climbed 21%, and total operating expenses surged 38% to 62% of the company's revenues. Those expenses will likely keep rising as it spends more heavily to defend its "best in breed" reputation against Chinese rivals and Qualcomm (NASDAQ:QCOM), which is promoting its mobile-based SoCs as 4G competitors to Ambarella's non-4G SoCs.

Due to those relentless headwinds, Ambarella posted its lowest ever quarterly GAAP net income last quarter. Net income plunged from $18.9 million a year ago to $1.8 million. On a non-GAAP basis, which excludes currency impacts, stock-based compensation, and other charges, its net income still fell from $23.7 million to $11.4 million. 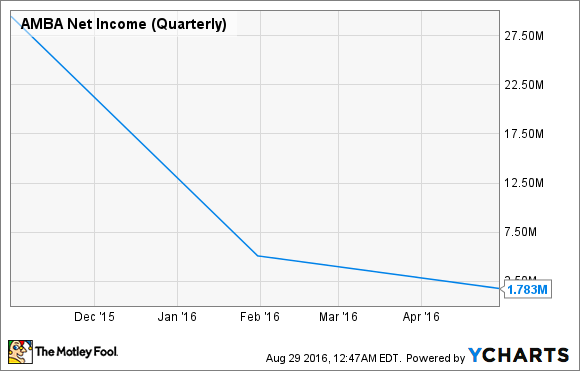 Analysts expect that decline to continue, with non-GAAP earnings falling 57% this quarter, 21% next quarter, and ending the year down 28%. But on the bright side, they expect Ambarella's earnings to rebound 22% next year and grow at an average rate of 15% over the next five years -- assuming that it can defend its "best in breed" reputation in image processing SoCs and gradually reduce its expenses.

I've expressed my concerns about Ambarella before, and these charts indicate that the chipmaker still faces plenty of near-term headwinds. Ambarella probably won't be completely crushed by the competition, but I think that it must spend very heavily to shore up its defenses -- which could cause its bottom line to drop into the red.

The company's dependence on GoPro is also troubling, since the Hero 5 and Karma will both face fierce competition this holiday season. Therefore, I'm keeping an eye on Ambarella, but I'm not a buyer until the situation improves.