Sometimes layoffs happen to even the most dedicated or qualified of workers. No matter your industry, you just never know when you might suddenly find your job on the line. But while recovering from a layoff can be difficult for everyone, it's especially tough for the over-50 set. 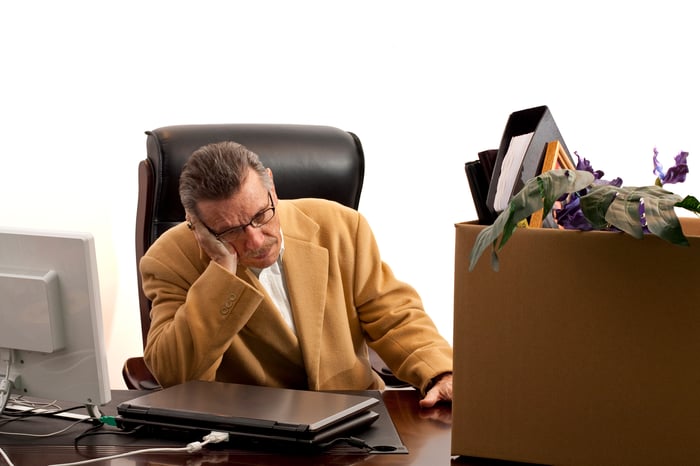 According to research from Boston College, unemployed workers 55 and up are less likely to find new jobs than unemployed younger workers. Following the 2008-2009 recession, the average length of unemployment for those 55 and up was 40.6 weeks, compared to just 31.6 weeks for younger job searchers. A 2012 study by the Urban Institute furthers this point: Despite their experience, workers in their 50s are 20% less likely to find new jobs than workers aged 25 to 34. While getting laid off is clearly never a good thing, it can be especially detrimental to older workers and their long-term financial health.

Many workers who get laid off in their 50s (particularly their late 50s) fall into a trap of sorts -- they're not old enough or ready to retire, yet companies don't want to invest in them, for fear of seeing them up and leave after just a few years' time. According to Boston College's research, many older workers point to age discrimination as a major deterrent to reemployment following a layoff. But since age discrimination is a tough thing to definitely prove, those who fall victim to it often have no choice but to pick up and move on in their search for employment.

Losing a job can have serious financial consequences no matter your age, but those repercussions aren't just short-term. According to a 2014 Rutgers University study, 50% of workers who are unemployed for six months or longer claim it will take anywhere from three to 10 years to recover financially. Meanwhile, 55% of those who remain out of work for six months or longer say they'll need to postpone retirement as a result. Since it tends to take older Americans longer to find work after getting laid off, losing a job later in life could wind up derailing your retirement efforts.

If you're unemployed and therefore not bringing in any money, you can't contribute a portion of your earnings to a retirement savings plan for a period of time. This means not only losing out on whatever principal contributions you could've made, but also on investment gains from that principal.

Let's say you typically contribute $500 a month to a retirement account but lose your job at age 59 and remain unemployed for a full year. Not only are you missing out on $6,000 right off the bat, but you're also losing the ability to grow that amount into an even larger sum. If your investments generate an average annual 5% return, missing out a year of contributions could actually set you back over $8,400 if you retire at 67.

Have a backup plan

While it's important for all Americans to have emergency savings in place, if you're 50 or older, it's even more critical to have a strong financial safety net. Specifically, you'll need enough savings on hand to ride out a potentially lengthy period of unemployment. Unless you have a spouse or partner who also brings in income, you should aim to save enough money to cover nine months of living expenses. This way, you'll have some cash available to pay the bills while you search for a new job.

Furthermore, as you get older, make a point of continuously updating your skills and expanding your knowledge of the industry you work in. This might mean getting additional certifications in your field, or taking a course every other year to enhance your qualifications. Doing so will not only make you a more marketable job candidate, but it also will send the message to prospective employers that you're a motivated worker who isn't just looking to coast along until retirement.

Remember, layoffs can happen at any time, and being the most experienced member of your team doesn't make you immune. Quite the contrary -- if you're over 50, you might take an even harder hit than workers 10, 20, or 30 years your junior. The more you do to prepare for a layoff, the better equipped you'll be to handle the situation if does indeed come to be.

Over 50? Here's Why You'd Better Not Lose Your Job @themotleyfool #stocks Next Article
Current