An explosion in ETFs has left investors with so many choices that it's difficult to separate the best ETFs from the worst. I've taken a deep look into many oil exchange-traded funds on the market and determined that these five are my picks for the top funds for oil investors and speculators alike.

Here's the case for each ETF listed above, complete with a table to show you how historic fluctuations in oil prices have affected the performance of each fund.

The oil ETF for speculation

When it comes to speculating on the price of oil, there is no better exchange-traded fund than United States Oil Fund. This fund tracks futures prices for West Texas Intermediate (WTI), sweet crude oil delivered to Cushing, Oklahoma. Commodity nerds should recognize that this is the futures contract quoted frequently on television and in the financial press as a benchmark for oil prices in the United States.

The process of rolling over contracts each month creates a somewhat unfortunate decay in the value of the fund over time. Generally, longer-dated futures contracts are priced higher than shorter futures contracts. Thus, January oil futures might sell for $50, while February oil futures are priced at $53 per barrel. When the fund rolls over its positions, it will effectively sell oil at $50 a barrel to buy it at $53. A reliance on futures makes this ETF only suitable for short-term speculation on the price of oil, as over the long haul, this fund will slowly drift toward $0, a weakness of many commodity ETFs. 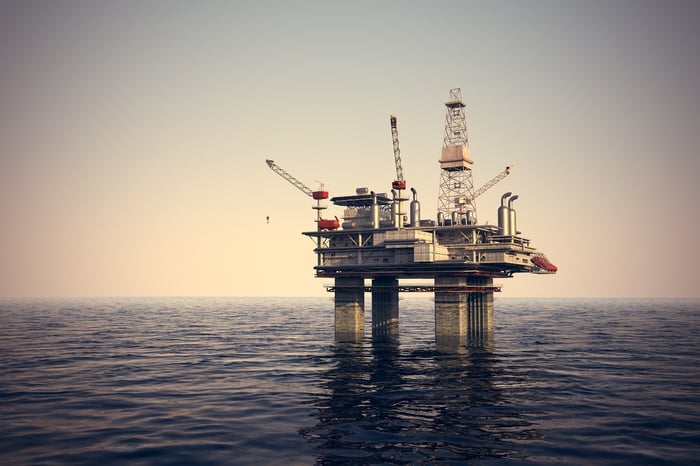 There is an oil ETF for every type of position. Image source: Getty Images.

An ETF for giant oil producers

The iShares U.S. Oil & Gas Exploration & Production ETF is an excellent investment for risk-averse oil investors, as it skews toward giant-capitalization companies rather than more speculative small-cap wildcatters.

Although the fund is diversified -- it held 53 E&P stocks at the time of writing -- it is heavily concentrated among its top five investments, which made up approximately 38% of the portfolio.

The fund's bias toward mega- and large-cap companies ensures that it will be neither the best performer during oil price spikes nor the worst performer when oil falls. You'll notice that it is significantly less volatile than the next ETF, which invests more heavily in small- and mid-cap E&P companies.

An ETF for small- and mid-cap oil stocks

The SPDR S&P Oil & Gas Exploration & Production ETF is a compelling fund for investors who want to own shares of smaller companies that profit from the actual exploration and production of oil. The fund's methodology results in broad diversification, and a portfolio that is more heavily weighted toward small- and mid-cap oil companies.

The fund holds companies with a float-adjusted market cap of $500 million or more, and equal-weights each stock in its portfolio. Thus, oil giants such as ExxonMobil make up just as much of its portfolio as smaller companies like SM Energy Company or RSP Permian. (The fund held all three of these companies at the time of writing.)

The impact of the ETF's small-cap bias can be seen in its performance by year. Returns vastly exceeded the change in oil prices during a surge in production activity and investor belief that American oil producers could pump profits from the ground for years on end. However, when oil prices declined starting in 2014, small-company stocks were hit with losses that vastly exceeded those of major oil company stocks.

The VanEck Vectors Oil Services ETF is a highly concentrated bet on oil services companies, holding just 25 stocks at the time of this writing. The fund's market-cap weighting results in a fund where the three-largest positions -- Schlumberger (21.8% of assets), Halliburton Co (15.7%), and Baker Hughes (5.8%) -- will naturally have an outsize impact on its performance.

The SPDR S&P Oil & Gas Equipment & Services ETF may be a better choice, as it is more diversified due to its larger portfolio of 34 stocks, and because it weights each company equally. The equal weighting results in a portfolio that is slightly biased toward smaller companies in the services industry. Note, however, that this fund is no true pure-play. Approximately one-third of assets are invested in the drilling subindustry rather than in services alone.

The right ETF for you

Ultimately, the right ETF is one that matches your particular view on energy. For the speculator who would prefer to trade ETFs than futures contracts, United States Oil Fund is an excellent choice, but it shouldn't be used as a mechanism to speculate on long-term oil fluctuations, due to its natural price decay.

Investors who simply want to add a little extra oil exposure to their portfolio, but not take any undue risks in doing so, should prefer the iShares U.S. Oil & Gas Exploration & Production ETF, as it has a bias toward larger and less-risky oil producers. Those who have a view that oil prices will rise considerably over a long period of time might favor the small-cap bias of the SPDR S&P Oil & Gas Exploration & Production ETF, which naturally has more leverage to oil prices due to the fact that it is heavily invested in smaller companies.

Importantly, these ETFs are relatively inexpensive to hold and have sufficient trading volume to ensure that the price of the ETF follows its underlying index with precision over time, which is why I consider them the five best oil ETFs on the market today.