Like its former tobacco-giant parent, Philip Morris International (NYSE:PM) has rewarded its shareholders with substantial dividend growth. In less than a decade, Philip Morris has boosted its dividend eight times, and investors expect that a ninth increase is likely to come within the next month. Yet looking beyond that, Philip Morris is now facing some challenges it hasn't had to deal with before, and some dividend investors fear that its payout growth could remain much slower than it was in past years. Let's take a closer look at Philip Morris with the goal of seeing if investors can count on higher dividends both this year and next.

Will Philip Morris stay ahead of the dividend curve?

Looking back to its IPO in 2008, Philip Morris International has done a good job of walking in the footsteps of its U.S.-focused tobacco counterpart. Having started with a solid dividend, Philip Morris quickly increased it by 17%, despite the fact that the financial crisis was starting to reach its most troubling point. Thereafter, the cigarette maker maintained its generous dividend policy, offering dividend growth in double-digit percentages each year from 2010 to 2013.

Yet over the past few years, Philip Morris International has struggled to keep up its dividend growth pace. In 2014, the payout rose by only 6%, followed by a 2% rise in 2015. Although the company hasn't yet made a dividend increase for 2016, most investors expect at least a modest bump upward. 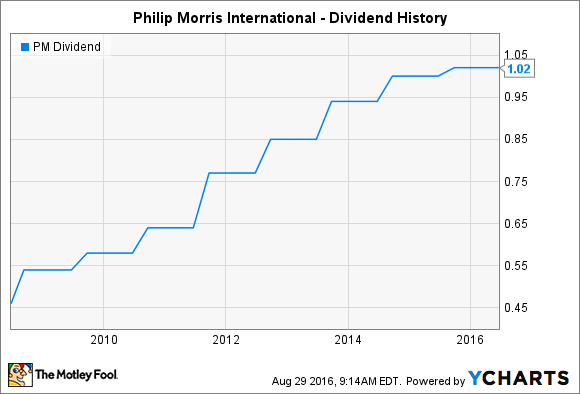 The big reason why Philip Morris reduced the rate at which it raised its dividends was currency-related. Philip Morris is based in the U.S., but almost all of its revenue is denominated in foreign currency. Because the U.S. dollar has been strong for several years, Philip Morris hasn't been able to translate its overseas success into a larger number of dollars. In some quarters, the impact of the strong dollar cost Philip Morris billions in revenue compared to what it would have been on a currency-neutral basis.

More recently, the impact of weak foreign currencies has fallen somewhat. In its most recent report, Philip Morris said that the dollar's strength put downward pressure of about $300 million on revenue, but the bottom-line cost was only $0.08 per share. Indeed, Philip Morris boosted its earnings guidance for the full year by a nickel per share specifically because of better-than-expected currency performance.

Philip Morris continues to point to fundamental success. CFO Jacek Olczak pointed to ongoing currency-neutral growth rates of 10% to 12% on the earnings front. The company is even hopeful that currencies could actually help its results as early as next year. If that's the case, then dividend growth could accelerate further. For instance, some expect Philip Morris to earn as much as $5 per share in 2017, up from roughly $4.50 per share this year. Based on current payout ratios, that could support a dividend of as much as $1.20 per share on a quarterly basis, which is 18% higher than the current dividend. Admittedly, a smaller increase is likely so that Philip Morris can get its payout ratio closer to its long-term target, but anything more than the 2% increase from 2015 would be more than welcome.

Investors shouldn't expect a huge increase to Philip Morris' dividend in 2016, because the currency-based turnaround that they've waited to see has been slow in coming. However, if the currency markets behave and the dollar doesn't post renewed strength, then 2017 might well be the year when Philip Morris sees more extensive dividend increases that would return the stock to its more familiar upward trajectory in the future.