When Williams Companies (NYSE:WMB) slashed its dividend by a mammoth 68.8% earlier this month, it did so with one purpose in mind. It wanted to use a significant portion of the cash it had been sending back to shareholders to buy a larger stake in its MLP Williams Partners (NYSE: WPZ). Doing so would not only support its MLP's capital needs but set Williams Companies up for an even bigger payday in 2018. Williams is not the only company bullish on its MLP, which is why investors with a zeal for yield and an iron stomach might want to consider buying, too.

The MLP everyone wants to buy

Williams Partners has been a hot commodity over the past year. Williams Companies initially wanted to buy out all the outstanding units it did not own, offering Williams Partners' investors a 14.5% premium to entice them to part with their units in May of 2015. It did so to gain control of the MLP's growing fee-based cash flow, which would enable Williams to increase its dividend by 10% to 15% per year through 2020.

However, Williams' initial plan went off track when rival Energy Transfer Equity (NYSE:ET) fought hard to seal a deal to acquire Williams Companies so that it could gain control of Williams Partners. It was not only interested in the MLP's growing stream of fee-based cash flow -- it thought that it could capture another $2 billion of commercial synergies, as well as $400 million in cost synergies by bringing Williams Partners into its family of MLPs. Unfortunately, Energy Transfer Equity chose a poor transaction structure, which ultimately led to the termination of that transaction.

Soon after that, another rival MLP, Enterprise Products Partners (NYSE:EPD), made an offer to merge with Williams Companies. It too sees Willams Partners' growing stream of cash flow driving significant revenue and commercial synergies for the combined companies. That said, after losing a bitterly fought court battle with Energy Transfer Equity, Williams Companies wanted no part of another merger. Instead, it decided to go back to its original plan and boost its stake in Williams Partners, albeit a bit slower this time.

It took the first step down that path last week, investing $250 million in acquiring 6.975 million units of Williams Partners at an average price of $35.84 per unit. At Williams Partners' current annual distribution rate of $3.40 per unit, that works out to a very compelling current yield of 9.5%. Williams plans to invest another $1.45 billion over the next two years to boost its stake in its MLP.

Why Williams Partners is such a hot commodity

Williams wants to own more of its high-yielding MLP because it believes that the already lucrative payout will go much higher in the future. Driving that outlook is the fact that Williams Partners has roughly $5 billion of fee-based expansion projects under construction that are expected to go into service through the end of 2017: 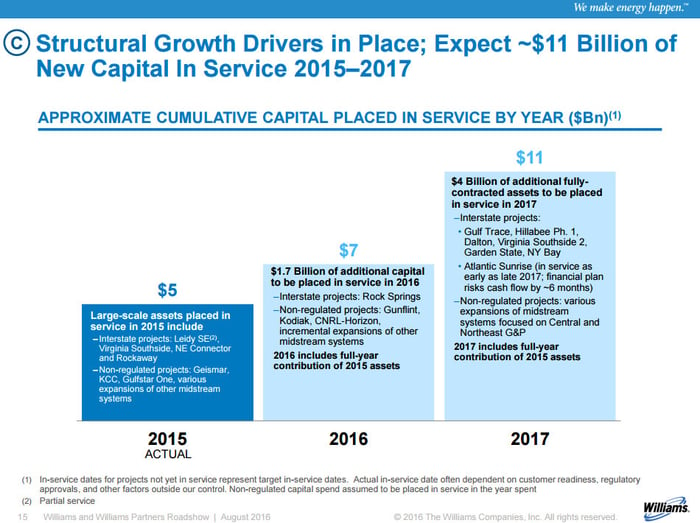 As those projects come online, Williams Partners' capital requirements will drop, even as its cash flow continues to rise. That leads Williams to believe that its MLP will be in the position to restart distribution growth in 2018. Williams is poised to cash in when that happens because it will own a substantially larger portion of its MLP's growing income stream.

That said, even with the cash infusion from its parent company, Williams Partners projects to be about $2.4 billion short of the capital it needs to complete its current capital expenditures phase. That means the company will need to issue debt and equity to bridge the gap. This gap is a potential problem because the capital markets are fickle, and another credit crunch could cause the company to pay up for that capital. That could cause additional volatility and impact the cash flow the company earns on its growth project. That said, if it can get the money it needs at a fair price, Williams Partners could create substantial value for long-term investors.

Williams Partners has been one of the most sought-after MLPs in the energy sector over the past year, and for good reason. The company is generating a growing stream of fee-based cash flow, which puts it in the position to pay a high yield right now -- and an even higher one in 2018 if everything goes according to plan. That is an income opportunity that yield-seeking investors might not want to pass up.