With August coming to a close, it looks like Bank of America (NYSE:BAC) will end the month as the best-performing big bank stock, at least among the eight global systematically important banks.

Its stock started the month trading at less than $14.50 a share. Since then, its share price has climbed to over $16, equating to an 11.5% increase for the month.

As you can see in the chart below, this ranks Bank of America at the top of its peer group in terms of stock performance. Runner-up Morgan Stanley, though, isn't far behind. Fueled by news that an activist investor has taken a large position in the investment bank, its shares have risen by 11.1% since the beginning of August. 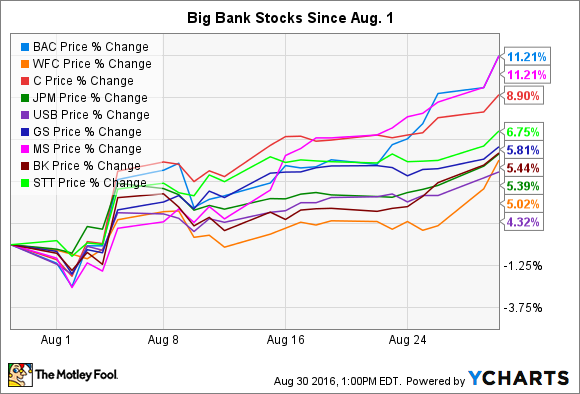 The outsized performance of Bank of America's shares last month can be boiled down to two things.

First, its shares were due for a rebound. Bank stocks took a beating early in the year after a multitude of factors led investors to flee the sector.

There were concerns about decelerating growth in China. Then there was the vote in the United Kingdom to separate from the European Union, known as Brexit. And persistently low energy prices had started to cause oil and gas companies to default on their loan payments.

All of these factors, it was feared, would weigh on banks' bottom lines, including Bank of America's. The net result is that its shares were down by 17% year to date going into August.

At least some of Bank of America's double-digit gain this month has thus likely been the result of a rebound, as fears about China and Europe subside, and energy prices have come off their lows from early in the year. 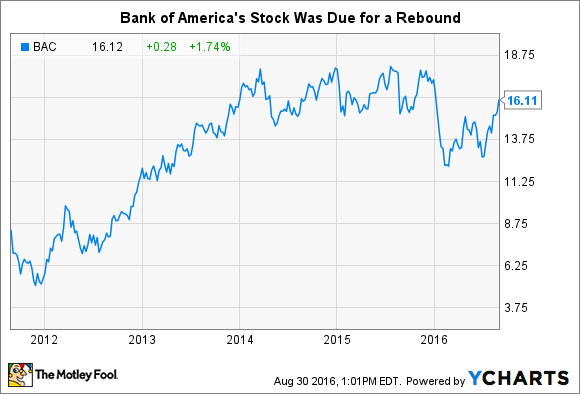 Second, as these fears subside, optimism has grown among analysts and commentators that the Federal Reserve could soon increase interest rates.

Rates have been near zero since the financial crisis eight years ago. Because this reduces the amount of money that banks earn from their loan and securities portfolios, it's weighed heavily on banks' revenues and profits.

The Fed began raising rates at the end of last year, boosting the federal funds rate by 0.25% in December. But it hasn't done so again since then, which has been a disappointment to bank investors.

In Bank of America's case, it would earn an additional $7.5 billion in net interest income if short- and long-term rates increase by only 100 basis points, or 1%. That's sorely needed for a bank that has struggled to generate a consistent and respectable profit in nearly a decade.

Consequently, recent news that the Federal Reserve could be on the verge of raising rates at one of its upcoming meetings has caused bank stocks to climb, and none more so than Bank of America.