Let's look at how e-commerce and other factors are affecting ground margin at the largest package delivery companies.

If you want to know where a company's heading, it's a good idea to focus on its most important activity. In the case of United Parcel Service Inc. (UPS 1.33%) and, arguably, FedEx Corporation (FDX 0.22%), it's their ground services that make all the difference. Both companies' ground operations are benefiting from surging e-commerce demand, but both are seeing margin pressure from a variety of sources.

What's going on, and can UPS and FedEx expect margin expansion in their ground operations, or are they facing protracted declines?

The answer to that question may be crucial to the stocks' prospects in coming years, particularly as both companies are becoming increasingly reliant on e-commerce and business-to-consumer (B2C) growth in the face of weak GDP growth and faltering industrial production. Leveraging the revenue growth opportunity from increasing ground revenue via margin expansion is a key opportunity for both.

UPS doesn't break out its ground operations separately in terms of profits, but we know that the U.S. Domestic segment contributed around 60% of total operating profit in the first half of 2016, with ground contributing 72% of the segment's revenue (45% of the total company). Meanwhile, the following chart shows the increasing importance of ground to FedEx's operating income. 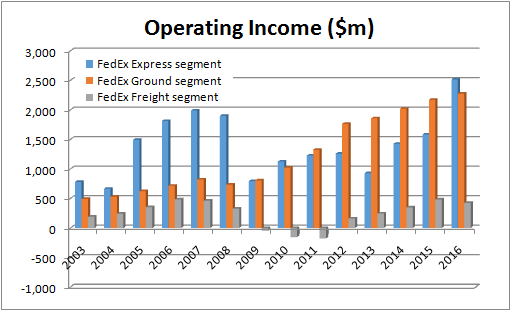 Ground margin at FedEx and UPS

Is it safe to assume that both companies are set for rapid profit growth in the coming decade as e-commerce growth continues?

Unfortunately, it's not that clear. As you can see below, a look at margin changes at FedEx's ground segement and UPS' U.S. Domestic Package segment (which contains U.S. ground) reveals the recent struggle to increase margins. Judging from the commentary in the companies' most recent earnings calls, the following issues are pressuring ground margin:

Let's look into how serious, and lasting, these three issues are and what other conclusions can be drawn from them.

The issue of the impact of fuel surcharges on UPS and FedEx was discussed previously, and you can see in the article linked that the net effect on UPS has been relatively minor in recent years. This is because lower oil prices (which cause lower fuel surcharges) also reduce fuel costs -- in the ground segment and elsewhere. Therefore, if you accept the idea that the impact of lower oil prices tends to balance out in the longer term, any short-term effects are best ignored.

The second issue is more complicated. FedEx and UPS are taking measures to influence customer behavior and/or optimize profitability with e-commerce deliveries. For example, both companies have adopted dimensional weight pricing, whereby packages are priced using a combination of size and weight. In addition, in June, FedEx reduced the package length upon which an additional handling surcharge is applied from 60 inches to 48 inches.

On the last earnings call, FedEx CFO Alan Graf referred to "higher operating costs in FY17, driven again by network expansion." Of course, he is talking about operating costs, but we also know both companies are having to increase capital expenditures in order to service e-commerce demand.

There are two points to consider: First, the network expansions are being made for a reason -- to service long-term growth -- and the higher operating costs may turn out to be relatively higher in the near term. In other words, as volume and revenue pick up, margin expands accordingly.

Second, the issue of e-commerce and residential deliveries becoming a bigger part of the sales mix is not necessarily a permanent trend. The reality is that business-to-business (B2B) delivery growth has been weak thanks to faltering industrial production growth. In other words, the sales mix could turn more favorable if the industrial economy picks up.

The fuel surcharge issue isn't a long-term problem. In addition, margin erosion has been exacerbated recently by the economic environment and the need to build out networks to service future growth -- both can change easily. Meanwhile, both companies are taking measures to influence packaging behavior.

In short, the near-term margin pressure on ground at FedEx and UPS is likely to remain, but investors shouldn't be pricing long-term erosion into their valuations. The key question is how successful both companies will be at influencing customer behavior with packaging. It's something they're proactively working on, and in an environment of increasing demand for e-commerce deliveries, it's likely they'll succeed.

Lee Samaha has no position in any stocks mentioned. The Motley Fool owns shares of and recommends Amazon.com and FedEx. The Motley Fool recommends United Parcel Service. We Fools may not all hold the same opinions, but we all believe that considering a diverse range of insights makes us better investors. The Motley Fool has a disclosure policy.