The U.S. electricity industry has been in a no-growth mode for a decade now, and that's had some wide-ranging impacts on utilities and power producers. Wholesale power producers like Dynegy (NYSE: DYN), NRG Energy (NYSE:NRG), and Exelon Corporation (NASDAQ:EXC) have seen net income drop as renewable energy replaces formerly expensive peak electricity demand and wholesale power prices fall. The dynamic has caused utilities to acquire more regulated competitors and even move into natural gas distribution.

No growth in electricity demand is also cutting back the potential for renewable energy to really take off in the U.S. When there are enough power plants to keep the grid running, there's no need to build more power plants for growth. As a result, most utilities aren't bidding for large new power plants unless they're shutting down a coal or nuclear plant. Wind and solar energy, which are winning competitive bids against fossil fuels around the world, may be cost effective versus other forms of new electricity generation today, but if you don't need new electricity generation, that doesn't matter.

But one emerging industry could boost demand for electricity and renewable energy: electric vehicles.

A lack of growth in U.S. electricity demand

First, let's look at how much electricity U.S. consumers use and how slowly it's growing. From 2006 to 2015, the U.S. consumed about 3.7 billion MWh of electricity annually, or 3,700,000 thousand MWh, as the U.S. Energy Information Administration reports their figures. And demand has been flat. 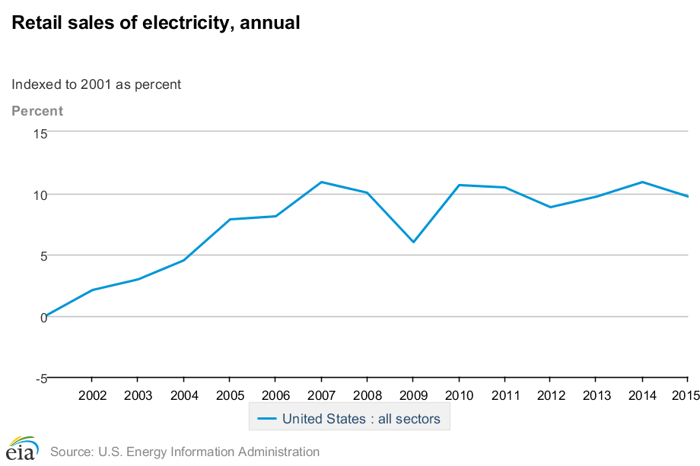 With energy efficiency becoming more important for consumers and the economy growing slowly, I don't see why this no-growth dynamic will change without moving vehicles to the grid.

How EVs could change the game

The impact EVs could have on electricity demand could be substantial if they grow to a large percentage of vehicle sales. Below I've built out some examples of the growth in electricity consumption if 100,000 to 50 million EVs were added to the roads in the U.S. each year. The calculations were based on an average of 13,500 miles driven per year and an efficiency of 3.1 miles per kWh, the best performance a Tesla Motors (NASDAQ:TSLA) Model S is rated at.

According to InsideEVs, 116,099 EVs were sold in the U.S. in 2015, so we're already beyond the first figure already. But with 17.5 million cars and light trucks sold in 2015, there's a lot of room for growth. And in a decade, it's possible 10 million EVs will be sold annually.

If that's the case, U.S. electricity demand would grow at least 1.2% each year. Remember, I'm using a best-case scenario for miles per kWh, so demand growth would probably be closer to 2% annually. And the effect of EV sales each year is cumulative, so the 50 million sales figure shows how big the impact could be over time.

How EV growth plays into the electric grid

The cascading effect of electricity demand growth from EVs could be significant in the U.S. If 43.5 million MWh of new energy production is needed to service 10 million EVs, it could be a boon for energy suppliers and renewable energy. If we assume solar or wind plants generate energy 25% of the time, 20 GW of new capacity will need to be built to meet new demand each year. In 2015, 15.9 GW of wind and solar were installed in the U.S. and that was just replacing other forms of energy production, so EV demand could be additive to that figure.

EVs also have the ability to respond to market signals more easily than most energy devices, which could be helpful to the grid. Through the charger, a utility could lower charging during peak hours of the day and move more charging time to low-demand evening hours. Or if solar energy floods the market with supply, as it has in some parts of California, EVs could be charged during the day. In this way, EVs actually add flexibility to the grid.

A key for electricity markets in the U.S.

The U.S. electricity market is in a real funk right now, and it's driven by the fact that electricity demand hasn't grown for a decade. EVs could change that in a big way, which could be helpful for everyone from your local utility to the solar developers building projects in the middle of the deserts of Arizona.