The energy industry is changing rapidly, especially in regard to electricity generation. Today, people can generate their own electricity with rooftop solar, it's possible to monitor energy usage in homes and businesses, and efficiency has become a real selling point for products like TVs and lightbulbs.

As a result, electricity usage has stalled, and price growth has slowed as well. The impact can be felt across the industry in companies that were once stable stocks for investors.

Electricity price growth has stalled
In the U.S., for over a century, electricity consumption and prices have both risen slightly every year like clockwork. But that growth narrative has changed as efficiency has become more prevalent in consumer and business products and as renewable energy sources have allowed customers to become energy producers.

The slow growth has had a big effect on electricity markets, as shown by the decimation of wholesale power suppliers in competitive markets.

Wholesalers feel the pinch
The electricity business is built on utilities being able to grow assets and sell more power to customers. Regulated utilities add distribution and transmission -- plus sometimes generation -- assets that are rate-based, with rates of return based on the cost of the assets built. So, profits in the regulated business are largely protected.

But in the wholesale market, there's less demand growth than the supply growth currently hitting the market. That's hit independent power producers, or IPPs, hard. Below I've highlighted the stock movement and net income trends of Dynegy (NYSE: DYN), NRG Energy (NYSE:NRG), and Exelon Corporation (NASDAQ:EXC), three of the biggest IPPs in the country. Each has had to deal with falling wholesale prices for electricity, where they've long been able to count on profits. 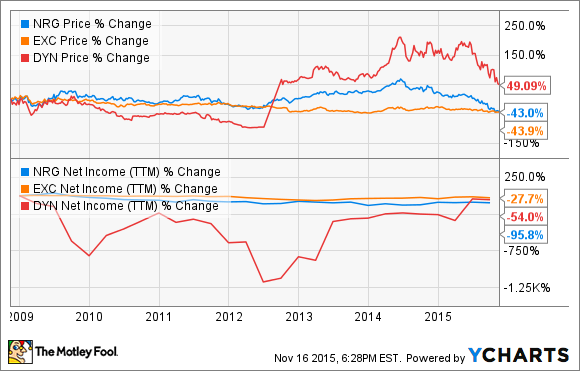 Long-term trends don't seem to point to a turnaround in these companies' legacy businesses. Exelon is fighting just to keep nuclear plants open, NRG Energy is struggling to find new strategies that could add new forms of energy without losing money, and Dynegy is dealing with 7.0 GW of coal plants that are losing money. The struggle is real for some of the biggest electricity producers in the country.

Renewables are taking the growth
In 2014, 55% of the new energy capacity built in the U.S. was wind or solar. This takes away peak power demand that was often high-margin for IPPs, but it also forces regulated utilities to start rethinking their futures as energy suppliers.

Programs to test energy storage, smart metering, and even utility-installed rooftop solar are booming around the country.

This forces IPPs to either become renewable energy owners, signing long-term contracts with utility customers, or to buy up regulated utilities to protect income. What's clear is that the legacy wholesale electricity business isn't as attractive as it was even a few years ago.

Light at the end of the tunnel?
Electricity markets are changing rapidly, and right now, that means slower growth in consumer demand and prices. But that could turn around if electric vehicles become more commonplace and people start needing on-demand energy to fuel their cars.

Until that demand comes, it looks like electricity demand won't grow as quickly as it once did as consumers become more efficient and renewable energy takes a bigger piece of the energy pie. That makes the utility business model, which used to pump out profits like clockwork, a riskier investment than it's been historically.