Tobacco giant Philip Morris International (NYSE:PM) has had to deal with increased regulation in many areas of the world in the recent past. That has come as a shock to investors, many of whom believed that the internationally focused company would enjoy a more cigarette-friendly environment than its U.S. counterparts. Yet more and more, countries across the globe are following the lead of the U.S. and other high-regulation nations in seeking to impose limitations on Philip Morris and its peers, and some of those efforts have been successful. Earlier this year, Philip Morris lost a court battle in the South American country of Uruguay that could have dramatic implications in other regions of the world. 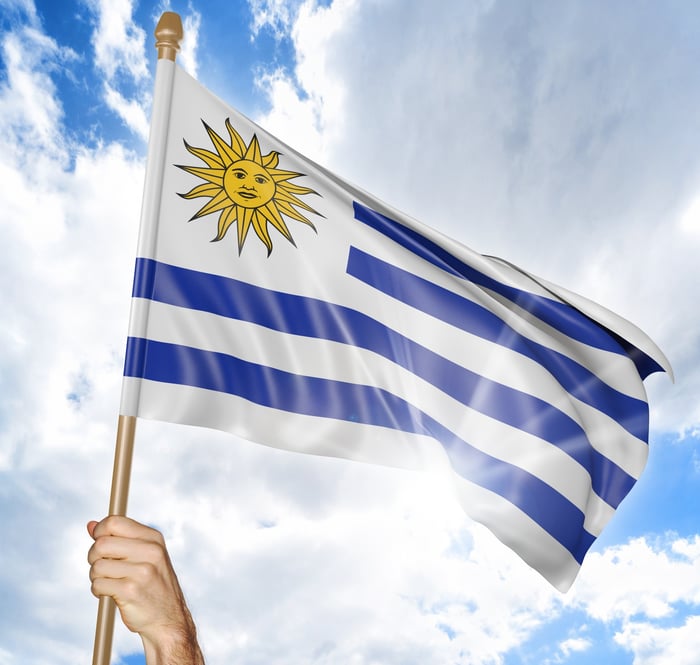 What the Uruguay case involved

Philip Morris International's dispute with Uruguay centered on efforts in the mid- and late 2000s to fight smoking. Prohibitions on smoking in efforts in enclosed public spaces were just the beginning of legislative action that eventually included an advertising ban, as well as packaging limitations, the inclusion of extensive warning language, and the prohibition of smoking in several types of public spaces.

To fight back, Philip Morris filed a claim at the World Bank's International Center for Settlement of Investment Disputes. The tobacco company said that the extensive health warning requirements prevented it from displaying its trademarked marketing images effectively. In addition, requirements that brands have only one image stopped Philip Morris from marketing different varieties of a particular brand. In order to give the international arbitration jurisdiction over the case, it asserted that Uruguay had violated various provisions of a treaty between the South American nation and Switzerland, where the Philip Morris subsidiaries that filed the claim were headquartered.

It took three years for the center to decide that it actually had the ability to make a decision in the case. However, it then proceeded with arguments, and after six years in total, the arbitration tribunal ruled in favor of the Uruguayan government.

In the end, the tribunal based its more than 300-page decision largely on its conclusion that the Uruguayan regulations didn't constitute a government taking of Philip Morris property. Moreover, it decided that Uruguay had the right to use its police powers to protect public health and that therefore no expropriation of Philip Morris' intellectual property took place.

As a result of the decision, Philip Morris missed out on its claim requesting $22 million in damages and did not succeed in having the regulations withdrawn. Instead, the tribunal ordered Philip Morris to pay $7 million as well as covering fees and expenses related to the proceeding. Philip Morris quickly acknowledged the decision as binding, with officials noting that the company had never intended to question the ability of any government to protect public health.

Yet the problem for Philip Morris goes well beyond Uruguay's borders. Many industry watchers saw the dispute as a test case for Philip Morris, which faces plenty of similar regulations in much larger nations across the globe. With the tobacco giant having lost its first foray into the international arbitration realm, the idea that Philip Morris can drag a national government into a legal proceeding won't necessarily be as intimidating for countries as it was prior to the decision.

Still, the way that the proceeding worked holds out some hope for Philip Morris and its peers. Some believe that the system of international decision-making favors Philip Morris and other tobacco companies over national governments. Given the expense involved, anything short of a full victory can be costly for a country. Although large nations like the U.K. and Australia are more than able to cover costs of such a proceeding, smaller countries trying to protect their citizens will face greater financial challenges -- all the while having to deal with a well-paid set of legal representatives that tobacco companies can employ easily to argue on their behalf.

The decision in Philip Morris International's case against Uruguay brought to an end six years of legal wrangling without the satisfaction of a favorable decision. That's makes it a bad move for Philip Morris. Yet in the long run, the use of similar legal forums to argue cases could end up having more positive results than what Philip Morris saw here.