Please ensure Javascript is enabled for purposes of website accessibility
Log In Help Join The Motley Fool
Free Article Join Over 1 Million Premium Members And Get More In-Depth Stock Guidance and Research
By Leo Sun – Sep 2, 2016 at 9:08AM

Which companies could Line buy with its $1.3 billion in IPO proceeds?

Line (LN) recently announced that it plans to spend the $1.3 billion raised from its July IPO on acquisitions to transform its messaging app into an all-in-one "smart portal" for its Asian users. Line users can already play games, read the news, make payments, hail cabs, order deliveries, stream music and video, and interact with chat bots within the app's ecosystem.

But Line believes that it can further expand that ecosystem with strategic acquisitions in mobile gaming, artificial intelligence, advertising, and video streaming. That's because Line's users in Japan already spend at least five times more time using the app than Amazon (AMZN -0.77%), the top e-commerce site in the country. Other rivals, like Tencent's WeChat and Facebook's (META -0.74%) Messenger, are also turning their messaging apps into monolithic platforms with similar features.

During a recent interview with Bloomberg, Line CEO Takeshi Idezawa stated that the company was "open-minded about the size and geography" of potential acquisitions, but that they had to be "the right fit" in terms of the business model and acqui-hired talent. While Idezawa didn't reveal any specific takeover targets, it's interesting to see what $1.3 billion might buy in the gaming, AI, and video streaming markets.

Line's total revenue rose 20% annually during the first half of the year thanks to the robust growth of its advertising business. But revenue from mobile games fell 5%, likely due to the saturation of the market. New challengers like Pokemon Go could also cause revenue from Line games, which are tethered to its app via single sign-ons, to fall.

Many of Line's games are merely clones of older games -- like Farmville and Bejeweled -- that feature its cartoon mascots. While the familiarity of these games makes them easy to pick up and play, they can easily be overshadowed by more unique titles. For Line to stay competitive in this market, it will likely need to acquire other mobile game developers. 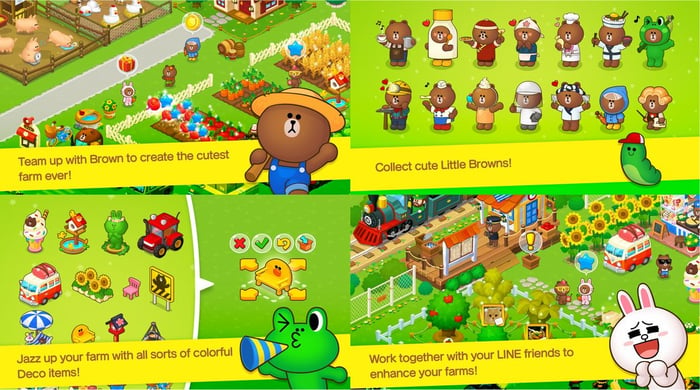 One beaten-down mobile developer worth considering is Glu Mobile (GLUU), the maker of Kim Kardashian: Hollywood, Racing Rivals, and Cooking Dash 2016. The company has lost nearly 50% of its value over the past 12 months due to four straight quarters of double-digit sales declines, which reduces its enterprise value to a mere $150 million. Acquiring Glu's portfolio could give Line a wider variety of titles and help it gradually expand beyond Asia. However, that acquisition could be blocked by Tencent, which owns over a fifth of the company for similar reasons.

To keep pace with Facebook Messenger's chat bots, Line will likely need to buy some start-ups to enhance its underlying technology. It could follow the footsteps of enterprise messaging company Slack, which launched an $80 million investment fund for bot start-ups last December.

Line could also acquire AI start-ups to beef up its machine learning capabilities. According to AngelList, there are over 1,300 AI-related start-ups with an average valuation of just $5.1 million. The company could also secure partnerships with cloud giants like Amazon's AWS to better analyze its data for targeted ads.

Periscope seemingly wiped out its rival Meerkat after being acquired by Twitter, but Meerkat subsequently pivoted toward making a video-based social network instead. That start-up, which was valued at $40 million after its most recent funding round last March, could be a great live-streaming fit for Line. If that price tag is too high, there are still over 1,200 other video streaming start-ups on AngelList with an average valuation of just $4.2 million.

But it's all speculation for now...

I'm not saying that Line will actually buy any of these companies, but it could strengthen its business considerably with just a few smart purchases. Doing so could reassure investors that its plans to expand into new markets with new services will actually work.