The downfall of this yieldco has been swift and dramatic. When TerraForm Power Inc (TERP) went public, it was supposed to be about as safe as energy investments got. The yieldco would buy projects from SunEdison that had long-term contracts to sell energy to utilities and use debt and new equity to grow, adding to its dividend at the same time.

The stock hasn't worked out as planned, though. These two charts show the challenge TerraForm Power ran into along the way.

A bad year for TerraForm Power

TerraForm Power's trouble really began in July of 2015 when it was part of SunEdison's proposed acquisition of Vivint Solar (VSLR). The deal would have moved the yieldco from the highly stable utility scale wind and solar market to residential solar, which investors didn't like. 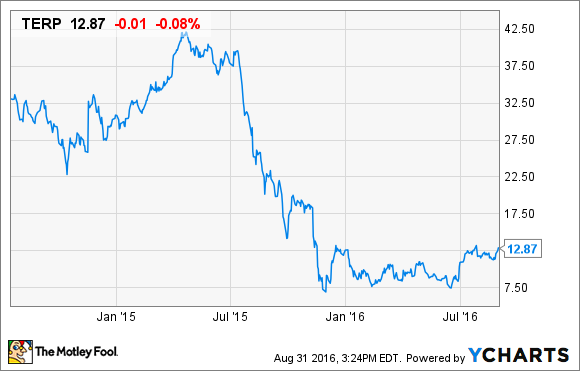 When shares started to drop, it exposed a huge flaw in SunEdison's business model: The company was reliant on yieldcos TerraForm Power and TerraForm Global to buy projects and fund growth, which became impossible after the stocks dropped and dividend yields shot higher.

In the chart below, you can see how dividends from TerraForm Power shot up from the time the stock went public through Q3 2015. By then, the stock was dropping and investors were questioning the company's future. When a dividend goes up and the underlying stock goes down, the implied dividend yield rises -- in this case, it eventually went into double digits. This is a problem for a yieldco's operations. 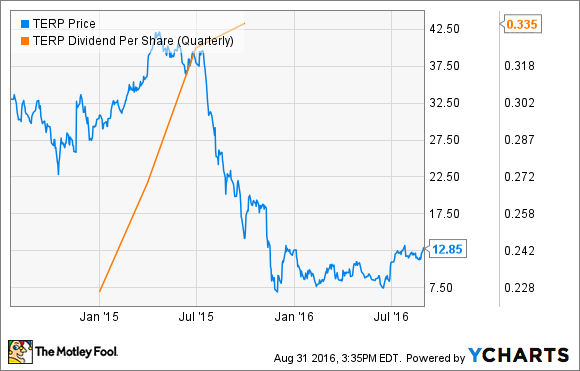 Yieldcos are supposed to issue debt and equity to fund acquisitions (from SunEdison in this case), but with a dividend yield in the double digits the cost of capital was too high to grow. That led to SunEdison's eventual bankruptcy, and the limbo TerraForm Power finds itself in today.

What's also evident in the chart is that dividend payments stopped after Q3 2015. That's because the company uses SunEdison's back office systems, which led to a delay in filing financial statements after the third quarter. As a result, the dividend yield is really down to 0% today, even though there's continually cash coming into the yieldco.

While there's a lot of uncertainty ahead for TerraForm Power, there could be some upside as well. SunEdison is reportedly shopping its stake in the company, and if the yieldco can break free of its original sponsor it could gain some stability and investor confidence. That could result in the shares recovering, assuming the dividend is still set around where it was in the third quarter of last year.

Until a sale is complete and we get a full financial picture of TerraForm Power, it's still a high-risk stock. That's why it's fallen as far as it has, and why it hasn't recovered already. Investors are hoping that long-term renewable energy contracts and consistent cash flows can help it avoid SunEdison's fate, which cost investors everything.

This Renewable Energy Stock's Future Is Now Even Brighter
357%