Please ensure Javascript is enabled for purposes of website accessibility
Log In Help Join The Motley Fool
Free Article Join Over 1 Million Premium Members And Get More In-Depth Stock Guidance and Research
By Matthew DiLallo – Sep 8, 2016 at 10:30AM

The focus going forward will be on drilling premium wells.

EOG Resources (EOG -0.01%) is about to embark on a new chapter in its history. It no longer wants to be known as just an oil growth company. Instead, it wants to be an oil company that earns premium returns. That means only drilling premium wells going forward, which it defines as those that generate at least a 30% direct after-tax rate of return at $40 oil.

That said, the company only has so many wells that fit this new criterion, which raises the question of how it will maintain its premium returns as it drills through its current inventory. It was a question CEO Bill Thomas addressed on the second-quarter conference call, where he detai three ways the company plans to replenish its premium inventory once it returns to growth mode next year.

Thanks to efficiency gains, technical advancements, and geoscience breakthroughs, EOG Resources initially identified 3,200 premium drilling locations out of its inventory of 15,000 future drilling locations. However, its goal is to continue to grow that number so that it has ample capacity to grow production for years to come. Thomas detailed how the company plans to expand this inventory by noting that:

The first and most immediate way is through conversion. Converting well locations that were on the edge of the 30% hurdle rate is a source of the 1,100 new premium locations we announced [in the earnings press release].

During the second quarter, the company was able to convert additional locations to premium through a variety of methods. For example, in the Eagle Ford shale, it added 390 locations simply by respacing well locations so that it could drill longer laterals. As the slide below shows, drilling two 10,420 foot wells instead of four 4,850 foot wells improved drilling returns from 24% to 49%: 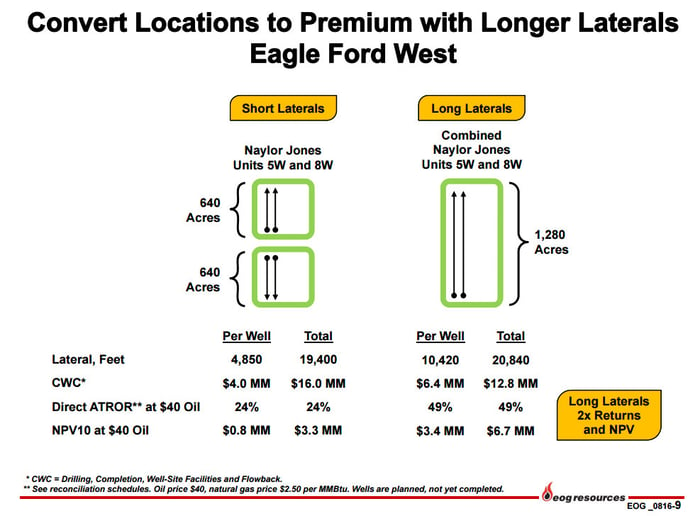 Drilling longer laterals is proving to be a game changer for the industry. For example, Chesapeake Energy's (CHKA.Q) decision to increase its lateral length in the Haynesville Shale from 5,000 feet to 7,500 feet alone boosted drilling returns from 3% to 18%. That improved to 47% once Chesapeake Energy increased the lateral length to 10,000 feet and started using enhanced completion techniques.

Furthermore, we have much more inventory on the verge of conversion. By improving well productivity or lowering cost, in most cases both, we expect much of our current non-premium inventory in the top basins to be converted to premium over time. Improvements to well productivity and cost savings are ongoing and never ending.

As the next slide shows, a 10% decrease in costs, or a 10% improvement, in the estimated ultimate recovery (EUR) would add 2,200 premium Eagle Ford locations, more than doubling the current inventory: 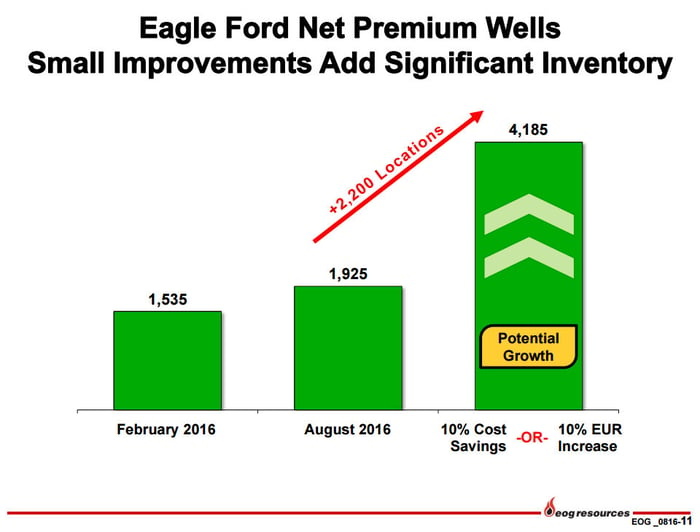 Similar conversion upside continues across much of the company's remaining inventory.

The second way we add premium inventory is through exploration. EOG is a leader in organic exploration growth because at our core we are an exploration-driven company. In this lower commodity price environment, we have not stopped looking. With EOG's decentralized structure, we have six experienced exploration teams in the U.S. generating new ideas, acquiring leases, and developing new plays. EOG is a prospect generating machine, and our shift to premium has not slowed that effort down. In fact, it has enhanced the return hurdle by which new plays are evaluated.

EOG Resources has a long history of being one of the early leaders in uncovering shale plays. In late 2014, for example, the company announced that it moved four horizontal plays in the DJ Basin and Powder River Basin from the evaluation phase to its drilling portfolio. Today, those two plays have about 280 premium drilling locations, and it is on the lookout for the next great shale play, which would extend its drilling inventory even further. As rival Apache (APA -0.75%) recently proved, there's still plenty of exploration potential in the U.S. for companies that know where to look.

The third way we expect to add premium inventory is through targeted bolt-on acquisitions. Due to the current low commodity cost environment, we are actively pursuing opportunities to capture top-tier acreage. We were successful on four such transactions in the Delaware Basin last year, and are optimistic we can execute on more through this down cycle. I am confident that we can replace premium-level drilling every year through conversions, exploration, and acquisitions. And as I said last quarter, this shift to premium drilling is permanent and it's a game-changing event for EOG.

For the most part, EOG Resources avoids acquisitions because they are costly. That said, the company recently demonstrated that it would not hesitate to pull the trigger if it found a deal that would add a meaningful amount of premium wells. However, the more likely acquisition targets of the future will be smaller strategic bolt-on acreage that could convert more of its existing inventory to premium. For example, as Thomas alluded to, the company acquired acreage in the Delaware Basin last year, completing three deals in the third quarter picking up 26,000 acres for $368 million. Most of this acreage was adjacent to its existing operating areas, which increases its ability to drill longer laterals for example.

EOG Resources knows that there are a limited number of wells that meet its elevated hurdle rate to qualify as a premium drilling location. That is why it plans to work hard to boost that number by converting, exploring, and acquiring additional locations. It firmly believes that it will be able to replenish its inventory so that it can continue to drill wells with high rates of return for decades no matter what oil prices do.

Matt DiLallo has no position in any stocks mentioned. The Motley Fool owns shares of EOG Resources. We Fools may not all hold the same opinions, but we all believe that considering a diverse range of insights makes us better investors. The Motley Fool has a disclosure policy.