With data breaches on the rise, which firewall vendor is the better long-term investment?

Palo Alto Networks (PANW -1.50%) and Check Point Software (CHKP -0.43%) are two of the largest firewall vendors in the world. The number of personal records exposed in data breaches worldwide doubled to 178 million last year, according to the Identity Theft Resource Center, indicating that business should be booming for both companies.

Yet shares of Palo Alto and Check Point have declined 18% and 4% respectively since the beginning of the year due to concerns about slower enterprise spending and competition from bigger rivals. Will either stock bounce back in the near future? Let's examine their core businesses, growth, and valuations to decide.

What do Palo Alto and Check Point do?

Palo Alto and Check Point both provide firewalls and other security solutions to a wide variety of customers. Palo Alto, which serves over 34,000 customers worldwide, mainly larger businesses -- including 85 of the Fortune 100 and half of the Global 2000. Check Point serves small and medium-sized businesses (SMBs) and individual consumers. Its customer base includes over 100,000 businesses and millions of users worldwide.

Palo Alto was founded in 2005 in the heart of Silicon Valley, while Check Point was founded in Ramat Gan, Israel, in 1993. Most of Palo Alto's workforce is still located in Silicon Valley, while Check Point's operations are spread across Israel, Sweden, Australia, Canada, and the United States. Both companies face the threat of larger competitors, like Cisco, undercutting each companies products with cheaper, bundled security solutions.

How fast are Palo Alto and Check Point growing?

Palo Alto expects its third quarter revenue to rise 33%-35%, marking its slowest growth rate since its IPO four years ago. The company's full-year revenue is expected to rise 33% this year, down from 55% growth in 2015. Those numbers weren't terrible, but that slowdown made its P/S ratio of 9 look a bit pricey.

How profitable are Palo Alto and Check Point?

That disparity can mainly be attributed to the difference between the companies' salaries and stock-based compensation (SBC) expenses. Since Palo Alto Networks is based in Silicon Valley, it pays its employees much more than Check Point, which has a more globally diversified workforce. 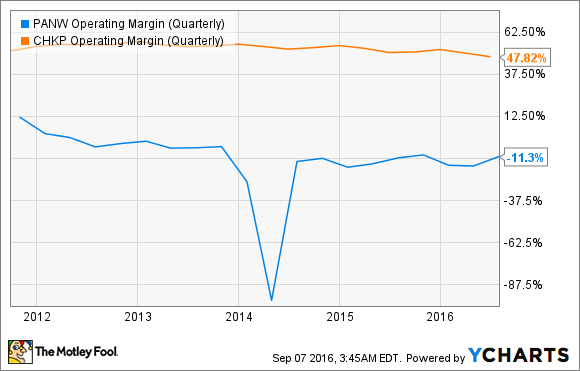 But in terms of non-GAAP profits, which are used in analyst forecasts, Palo Alto's outlook is stronger. Analysts expect Palo Alto's non-GAAP earnings to improve 42% annually over the next five years, which gives it a 5-year price/earnings to growth (PEG) ratio of 1.2.

Check Point's earnings are expected to rise 10% annually over the next five years, which gives it a higher PEG ratio of 1.7. This means that Palo Alto is still cheaper than Check Point relative to its non-GAAP earnings growth potential.

The verdict: Palo Alto is a slightly better buy

Based on its sales, non-GAAP earnings growth, and valuations, Palo Alto is a more promising investment than Check Point. But as I mentioned in previous articles, Palo Alto's upside will remain limited if it can't reduce its SBC expenses or buy additional companies to maintain its long-term sales growth.