They specialize in smartphones and soup, and last week these 3 companies also specialized in making their shareholders richer.

All was basically quiet on the dividend raise front as August turned into September. The new month didn't bring with it a fresh gust of distribution hikes, but that was to be expected -- we're in the down period between earnings seasons, after all. 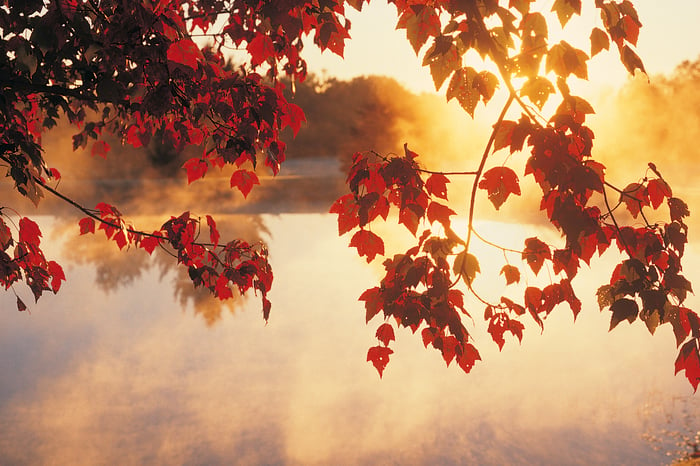 That isn't to say that none occurred, however. In fact, there were several high-profile companies that announced they'd be adding some coin to their payouts. Here are the top three of the week, in my opinion.

Hello? It's Verizon (VZ -2.22%) calling with the latest in a lengthening series of dividend raises. The big telecom incumbent has lifted its quarterly payout incrementally by 2%, to just under $0.58 per share.

Since everyone and their cousin seemingly owns a smartphone these days, competition is fierce in the telecom service business. Verizon has been struggling lately to thrive in this heated atmosphere; over the summer it reported its first quarterly revenue decline in six years for its Q2, with net additions of retail postpaid subscribers dropping by nearly 50%. 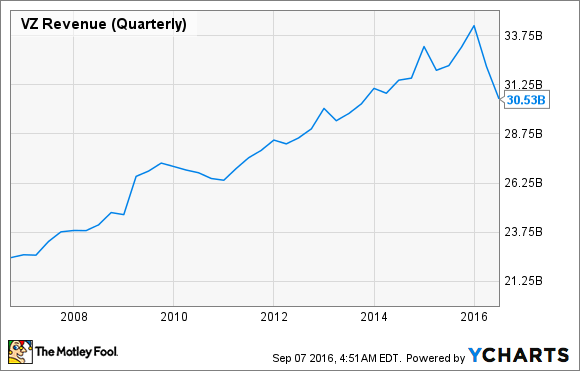 The company's strategy has been to invest heavily in content, buying AOL and Yahoo!. That's a step in the right direction, in my opinion, but a company the size and scope of Verizon can't exactly turn on a dime. It'll likely take some time for the company to get to the point where it starts paying off well.

Meanwhile, Verizon is well in the black in terms of operating and cash flow, and can easily afford its relatively generous dividend (as well as stock buybacks, when it's in the mood). Considering that, I'd rate the company's payout as safe, and I'd expect it to keep rising, albeit at fairly modest rates.

Verizon will hand out its new distribution on Nov. 1 to shareholders of record as of Oct. 7. At the current share price, it would yield 4.3%. That's more than double the current 2% average of dividend-paying stocks on the S&P 500.

Soup is good for you, not least because it sometimes confers direct financial benefits. At least that's the case if you own shares of Campbell Soup (CPB -2.05%), which declared a 12% hike in its quarterly payout to $0.35 per share.

At first blush, that looks optimistic, given the unhappy numbers the company posted in its most recently reported quarter. Sales in its organic food category unexpectedly stumbled, effectively flat-lining (on a year-over-year basis) its overall revenue, which came in a shade under $1.7 billion.

Adjusted net profit slipped a bit (to $143 million), while forward guidance called for anemic year-over-year growth of 1%, at best, for the current fiscal year.

Campbell Soup might not have posted the most encouraging figures for the quarter, but it should be remembered that on an adjusted basis, the company is profitable. And as a traditionally conservative manager of cash, it tends to spend well within its means on its dividend and share buyback programs. 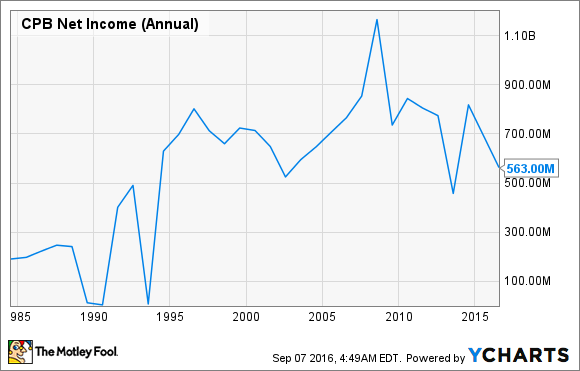 Considering that, I think the new payout is at least sustainable, although I wouldn't count on a repeat of the double-digit raise the company just enacted anytime soon.

Campbell Soup's upcoming dividend will be paid on Oct. 31 to investors of record as of Oct. 12. It would yield 2.4% at the most recent closing stock price.

Since launching its quarterly dividend in late 2010, chip maker Broadcom (AVGO -4.27%) -- the successor company to Avago Technologies -- has lifted it incrementally in every subsequent quarter. This latest bump is a 2% improvement to $0.51 per share. 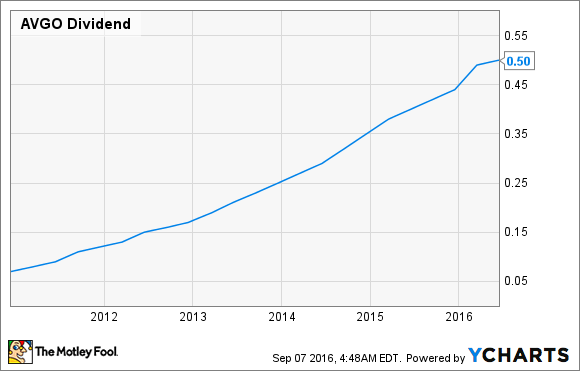 Broadcom is a supplier of chips to phone and tablet producers, most notably Apple. As if that weren't enough to keep it busy, it's also an active acquirer. Most recently, as Avago Technologies it swallowed Broadcom for a hefty $37 billion in May 2015, taking the target company's name as well as its assets.

That wasn't a cheap buy, but it looks like it'll pay off handsomely. In its Q3, Broadcom (in its current incarnation) booked $3.8 billion in revenue, 7% up on a quarter-over-quarter basis (a year-over-year comparison isn't appropriate because it didn't own Original Broadcom then). Adjusted net income grew by a robust 15% to nearly $1.3 billion.

We can safely assume Broadcom has a good chance to keep improving those numbers, as it's a key supplier to the industry. I'd also bet on the company keeping up those incremental dividend enhancements -- it habitually spends less than 50% of free cash flow on its payout, so it can easily afford the bumps.

The next Broadcom dividend payment is to be dispensed on Sept. 30 to stockholders of record as of Sept. 19. It would yield a theoretical 1.2% on the current share price.

Eric Volkman has no position in any stocks mentioned. The Motley Fool owns shares of and recommends Verizon Communications. The Motley Fool recommends Broadcom and Yahoo. Try any of our Foolish newsletter services free for 30 days. We Fools may not all hold the same opinions, but we all believe that considering a diverse range of insights makes us better investors. The Motley Fool has a disclosure policy.