We're examining which stocks have the highest daily average volume on the Nasdaq and NYSE. 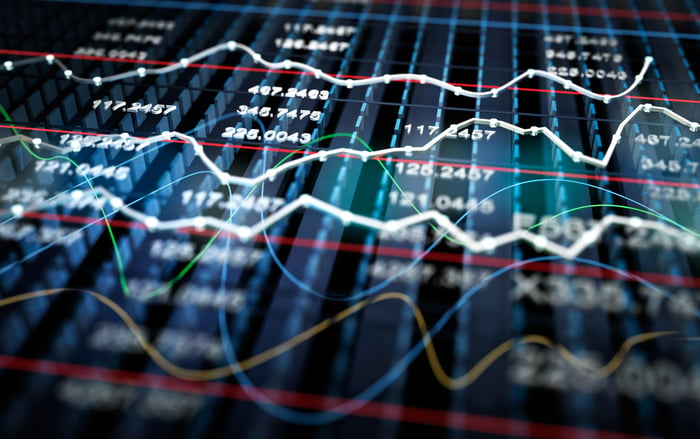 Though certainly not sexy, liquidity matters in the world of investing. This makes seeking highly active stocks an attractive area for investors to potentially buy and hold.

Active stocks are defined as stocks traded on the NYSE or Nasdaq that are the highest traded stock on a daily basis measured by volume. So far in 2016, the 11 most active stocks for this year have been Bank of America, Freeport-McMoRan (FCX -2.34%), Sirius XM Holdings, Chesapeake Energy (CHKA.Q), Apple, General Electric, Ford Motor, Pfizer, Microsoft, Facebook (META -0.74%), and Micron Technology (MU -0.88%).

However, this chart alone certainly doesn't tell the entire story for any of the names. Keeping this in mind, let's quickly examine some of the names from the above list of most active stocks this year.

Oil and resources giant Freeport McMoRan's impressive resurgence in 2016 only tells part of its story. Even after accounting for its 2016 rally, this highly traded stock remains down roughly 75% over the last five years. 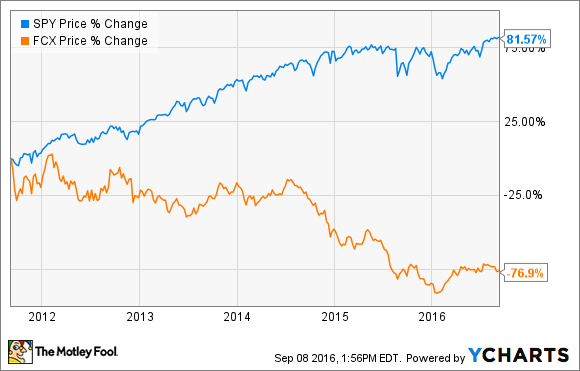 The culprit? At a superficial level, the company chose to get aggressive at precisely the wrong time. In 2013, Freeport acquired McMoRan and another oil and gas exploration operation. The acquisitions required the new Freeport McMoRan to assume roughly $16 billion in debt precisely as commodity prices dramatically softened, clouding the company's revenue and debt servicing outlook.

Predictably, this heightened risk profile sent Freeport McMoRan's stock off a cliff, a fall from which it has struggled to since fully recover. However, as you can probably infer from its soaring stock this year, things are getting better at the company. It has aggressively sold assets to pay down debt, and commodity prices -- especially oil -- have recovered. Things are certainly getting better for the company, but it still has a long way to go before it's entirely out of the woods, so buyer beware.

In many regards, the broad strokes of Freeport McMoRan's investing narrative also apply to Chesapeake Energy, to a nearly identical degree. Like Freeport, Chesapeake Energy stock's 65% gain so far this year masks the broader 75% loss it has experienced over the past five years. 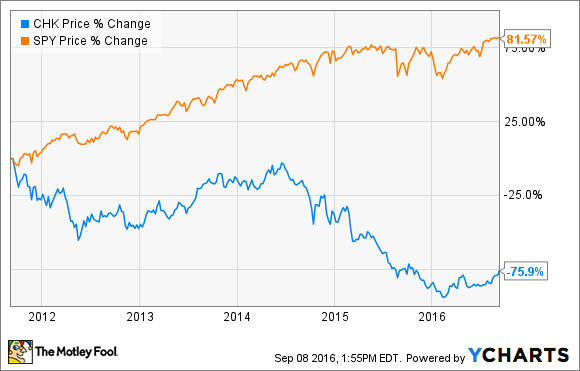 Like Freeport, much of Chesapeake's there-and-back-again storyline can be attributed to betting big on a boom in natural gas production, largely fueled by leverage, exactly as prices for the commodity imploded.

Much of Chesapeake's more recent efforts have been aimed at staying alive rather than growing its business. So far this year, Chesapeake has increased its asset sales estimate to $2 billion, arranged new financing to help refinance debt coming due in 2017, and seen its revenue outlook improve thanks to rising commodity prices. In reaction to its better-than-expected Q2 earnings performance, one analyst noted that Chesapeake "seems to pulling out of its death spiral," and that seems an appropriate metaphor for the company as a whole. It appears the patient didn't die on the operating table, but Chesapeake still has plenty to prove.

As (hopefully) should come as no surprise, Facebook's outsized gains in 2016 have nothing to do with the swings in the energy and resources markets. Rather, Facebook continues to cement its place as one of the most dominant online platforms in tech today.

Facebook's eponymous social network continues to grow impressively. In its most recent quarter, the company saw monthly and daily users grow in the mid-teens, itself an impressive feat for a social network that already counts nearly one-third of the world's online community as a member. The company continues to print profits as well.

Equally impressive is Facebook's dominant position in newer social networks via Instagram and mobile messaging platforms via Facebook Messenger and WhatsApp. Facebook has also moved aggressively into further-flung areas of technology, including virtual reality. As such, Facebook's continued stock price appreciation should be seen as a reflection of the company's continued execution across nearly every facet of its business.

Last but not least, Micron Technology's dramatic 2016 rally also needs to be placed within the context of its broader history. 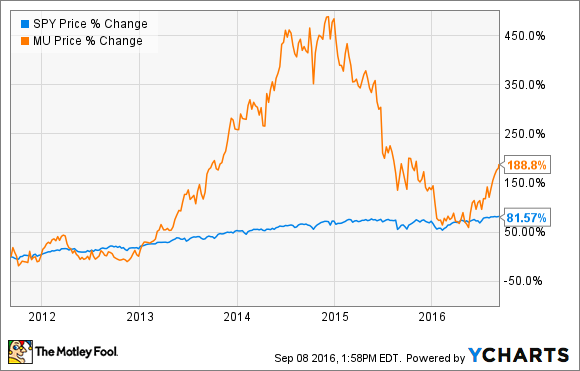 For those somewhat unfamiliar with the company, Micron is one of the world's largest manufacturers of memory semiconductors, alongside Samsung and SK Hynix. The three control 90% of their market. Unfortunately, the market for memory chips is effectively a commodity today that requires massive amounts of capital expenditure to maintain.

As an analogy, its high fixed costs and commodity-like price fluctuations parallel the energy companies discussed above. This makes Micron prone to similar boom-and-bust cycles as memory chip prices wax and wane.

As the above chart should hopefully suggest, conditions in the memory chip market have improved in recent quarters,, a scenario analysts believe could help tip Micron into the black once again. Like with Chesapeake and Freeport, Micron's industry-specific characteristics make it a somewhat riskier investment, so anyone interested needs to delve deeply into its valuation before purchasing this highly popular stock.