Please ensure Javascript is enabled for purposes of website accessibility
Log In Help Join The Motley Fool
Free Article Join Over 1 Million Premium Members And Get More In-Depth Stock Guidance and Research
By Jason Hall, Neha Chamaria, and George Budwell – Sep 12, 2016 at 11:04AM

Three of our experts think that GW Pharmaceuticals, Coca-Cola, and Caterpillar stocks are way too expensive right now. Keep reading to find out why.

Every stock has a fair price. Pay too much, and you might get burned. Image source: Getty Images.

One of the biggest mistakes you can make as an investor is paying too much for a stock that's not worth the premium. And with the market near its all-time highs, there are a lot of stocks that fall in the "expensive" bucket. The catch? Sometimes those expensive stocks can make great investments -- if the premium you pay is for a premium business generating returns that warrant the high price.

But too many times, investors make the mistake of paying a premium for a business that isn't worth it. With that in mind, we asked three of our experts to weigh in on the topic, and suggest equities they don't think justify their high P/E ratios. Their suggestions: a speculative upstart, an industrial stalwart, and one of the most well-known companies in the world. Keep reading to learn why our experts say these  stocks are so overvalued.

George Budwell: While the biotech bubble might have burst this year, shares of GW Pharmaceuticals (NASDAQ: GWPH), which is developing marijuana-based treatments, haven't noticed. In fact, the drugmaker's shares have gained an eye-popping 41% this year alone: 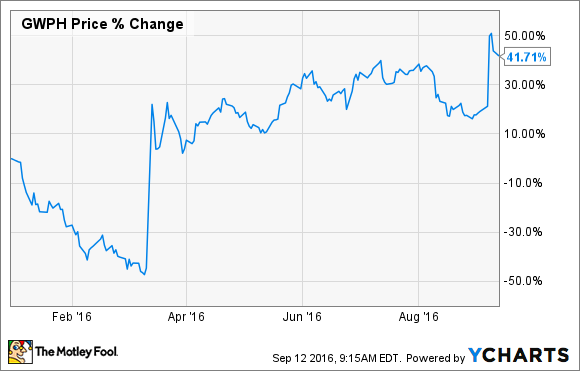 Although GW's steady march upwards has been tied to two positive late-stage readouts this year for its childhood epilepsy drug candidate, Epidiolex, there's good reason to believe that the market has simply gotten ahead of itself on this one.

The bottom line is that GW's shares are probably trading somewhere around 7 times Epidiolex's peak sales right now. That's a rather rich valuation any way you cut it. But the fact that GW is developing a novel -- and as of yet commercially unproven -- type of product certainly doesn't help matters. In short, the all-things-marijuana craze appears to have juiced GW's valuation beyond the company's underlying fundamentals or its near-term growth prospects, perhaps setting it up for a sizable pullback.

Too soon to jump on to this industrial heavyweight

At current prices, Caterpillar is trading at an insane 43 times trailing earnings. Worse yet, the company's earnings are projected to grow only by low- to mid-single digit percentages over the next five years. Those muted estimates don't surprise me: Two of Caterpillar's businesses are facing severe headwinds, while the third isn't in its best shape either.

The mining industry is still in the doldrums, even as low oil prices have stalled spending in the oil and natural gas industry. Both industries are under significant pressure, posing a major challenge for Caterpillar's resource extraction and energy and transportation businesses going forward. Caterpillar's construction industries business may be better off, but it's unlikely to be sufficient to offset the weakness in the other two segments. Not to mention the structural shift in economies like China's -- from investment-based to consumer-driven -- that could jeopardize Caterpillar's growth plans in coming years.

The problem is that there are simply too many unpredictable and uncontrollable external factors steering Caterpillar's fortunes, some of which could have long-term implications. That's already evident in the company's ongoing restructuring moves, which have included plant shutdowns and layoffs on a pretty big scale. Given the backdrop, it's surprising to see Caterpillar shares trading at such high premiums today. I hate to say this, but if investors are already betting on its turnaround, they might have jumped the gun.

When a great company isn't a great investment

Jason Hall: The Coca-Cola Co (KO) is very well-run, sells a product for dollars that it can make for pennies, and has an incredibly strong track record of returning profits and value to investors. Another feather in its cap is that Warren Buffett -- arguably the greatest investor ever -- made his Berkshire Hathaway Coke's largest shareholder. But Coca-Cola is overvalued in my book, and not a stock that I'd buy today.

Coca-Cola trades at around 24 times trailing 12 month earnings. Sure, Coke stock has traded at a much higher P/E ratio in the past, but that statistic has been on an upward trend since shares bottomed out during the financial crisis: 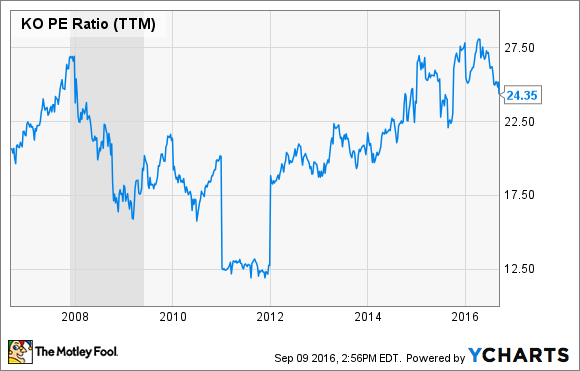 And it's at a point where I think Coke is going to have a tough time generating enough return to be worthy of a valuation that's higher than the market's average. Key reasons why:

Investors have been willing to pay a premium for Coke shares in recent years largely for its steady dividend. And while that dividend should be secure and is likely to increase over time, Coke's core business is likely to continue facing weak growth prospects and increased competition from other beverage choices as consumer tastes evolve.

Bottom line: I admire the company and its management, and it's a company I'd consider buying shares of at the right price. No matter how well-run Coke's business is, it's almost always a mistake to pay a premium price for a company dealing with a secular decline in demand for its most important products.