What companies could the tech giant buy with its massive cash pile?

Apple (AAPL -0.44%) finished last quarter with $18 billion in domestic cash and equivalents, and another $215 billion stashed overseas. The massive cash hoard has recently raised major questions about repatriation and taxation, but the biggest question of all is how Apple plans to spend all that cash. 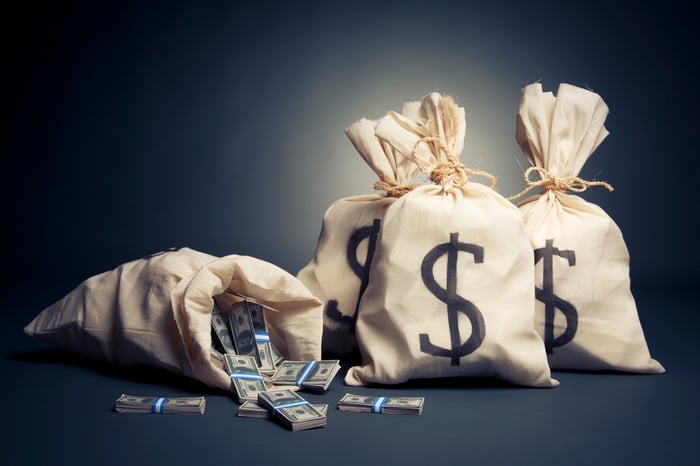 With sales of iPhones, iPads, and Macs fading, Apple must expand its subscription services, strengthen its software ecosystem, and expand into new markets. In that light, let's discuss how Apple could spend its cash hoard over the next few years.

With the purchase of Beats and the launch of Apple Music, Apple declared that it wanted to turn subscription-based media services into a key pillar of growth. Apple was reportedly developing a "skinny bundle" of 25 streaming TV channels last year, but the efforts were allegedly bogged down by Comcast withholding its channels for its own X1 set-top box.

However, neither of those deals would make much sense. Buying Time Warner, which has a massive enterprise value of $83 billion, would reduce Apple's margins and give it all of Time Warner's cord-cutting woes. More importantly, Apple already integrated Time Warner's most promising platform, HBO Now, into iTunes and Siri.

Netflix is struggling with user growth, and content licensing and original programming costs are weighing down its bottom line. The company's enterprise value of $43 billion prices the company at nearly 6 times sales -- which is much pricier than Time Warner's EV-to-sales ratio of 3. After factoring in acquisition premiums, Apple could easily pay over $100 billion for each of these companies.

Instead, Apple should buy smaller players such as Lions Gate (LGF-A 0.52%), the movie and TV studio that recently agreed to acquire pay TV network Starz. Its enterprise value of $4.4 billion (less than 2 times sales) is much more affordable, and the acquisition would add a lot more video content to Apple's portfolio. Streaming leader Pandora (P), with an enterprise value of $3.3 billion, would also be a logical fit for Apple Music.

Apple has never acknowledged Project Titan's existence, but it's widely believed that the secretive team is developing a self-driving electric car. This has sparked ongoing rumors that Apple might buy electric-auto maker Tesla Motors (TSLA 1.02%).

While it's easy to see the parallels between Apple's and Tesla's sleek and pricey products, Tesla's enterprise value of $30 billion -- which values the company at nearly 7 times sales -- simply looks too high. Moreover, Tesla's negative margins and its decision to bail out SolarCity indicate that the purchase would crush Apple's margins.

Instead of buying entire companies, Apple could follow up its $1 billion investment in Chinese ride-hailing app Didi Chuxing with additional investments in smaller companies in the ride-sharing and autonomous-vehicle markets. There are plenty of companies to choose from -- over 4,500 automotive start-ups are listed on AngelList, with an average valuation of $4.5 million.

Apple currently depends on Alphabet's Google, Amazon.com, and Microsoft for its cloud computing needs. That dependence will become awkward as Apple competes more directly against these peers with its own software ecosystem, so it's been building its own cloud centers.

However, Amir Efrati and Steve Nellis at The Information claimed that it could take "years" for Apple to declare cloud independence. Therefore, it makes sense for Apple to buy smaller cloud and enterprise players to close the gap.

Apple recently acquired AR/VR firms Metaio, Faceshift, Emotient, and Flyby Media, indicating that it's developing an AR of VR headset. A Financial Times report claimed that Apple's AR/VR team has already developed prototype headsets, but it's unclear when they might arrive.

Apple will keep returning cash to shareholders via buybacks and dividends over the next few years, but investors should keep a closer eye on its investments and acquisitions. These moves will provide a clearer picture of how Apple plans to reduce its long-term dependence on the almighty iPhone.