Apple seems to be within striking distance of Intel's best ultra-low-power notebook and convertible processors.

If there's one company in the industry that seems to be able to challenge Intel (INTC -0.89%) in terms of mobile processors, it's Apple (AAPL -1.33%). The latter has been making significant strides in its mobile processor technology, which allowed it to come within striking distance of Intel's best ultra-low-power processors with its A9X chip.

Indeed, according to Geekbench 4 -- a new performance test that allows for cross-platform comparisons of processor capabilities -- the A9X chip inside the iPad Pro manages to score 3011 points in the single-core test and 4882 in the multi-core test. 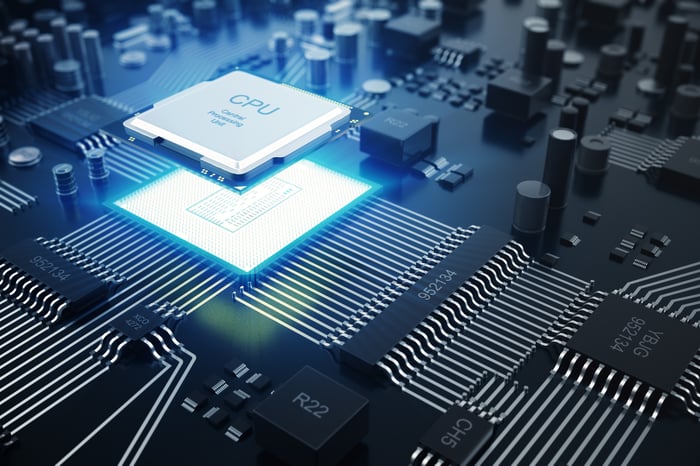 Based on these results, Intel's chip is solidly in the lead, and Intel has a new chip for this segment based on its new Kaby Lake architecture out. However, based on the performance results of Apple's new A10 Fusion chip inside the iPhone 7 and 7 Plus, the competition between Intel and Apple for mobile processor performance superiority is sure to heat up.

Trying to predict the future

The highest A10 Fusion score I could find in the Geekbench 4 data base is 3501 on a single core and 5631 when both cores are active. This means that, at least in Geekbench 4, the A10 Fusion has roughly the same single-core processor performance as Intel's top sixth-generation Core m processor.

Intel's chip still has a lead-in multi-core, though, probably because Intel's core implements a feature known as Simultaneous Multi-Threading, which allows for better utilization of a core's resources in applications that can take advantage of multiple cores.

However, the A10 Fusion to Core m 6Y75 comparison isn't that interesting. What will be much more interesting is the comparison of the upcoming A10X (Fusion?) that will be used in Apple's 2017 iPad lineup with Intel's recently announced 4.5-watt Core i7-7Y75, the direct replacement for the Core m 6Y75.

With the A10X, Apple will enjoy an expanded power budget and is expected to migrate to a new 10-nanometer manufacturing technology from Taiwan Semiconductor Manufacturing Company (TSM -1.57%). These factors combined should allow Apple to crank up the processor performance inside its next-generation tablet processor.

The Core i7-7Y75 from Intel is manufactured on Intel's revised 14-nanometer+ process, which allows the company to dial up the maximum single-core turbo on the chip from 3.1GHz on the 6Y75 to 3.6GHz on the 7Y75, a 16% improvement.

If performance on the 7Y75 scales linearly with frequency in the Geekbench 4 test, we should see a single-core score of roughly 4265 and a multi-core score of about 8100.

Apple is really close to Intel

It's clear that in terms of per-core performance in ultra-mobile power envelopes, Apple and Intel are essentially within spitting distance of each other. This isn't a knock on Intel, but rather a demonstration of just how good Apple's processor core development team is.

In multi-core performance, Intel should still enjoy a lead. However, I wouldn't be surprised to see Apple's engineers implement simultaneous multithreading in a future processor core -- perhaps in the A11/A11X -- to try to close the multi-core gap with Intel.

In this case, Apple could market future iPads as having similar performance to its future top-end thin-and-light MacBooks -- an exciting prospect for iPad users, but perhaps an uncomfortable one for Intel.