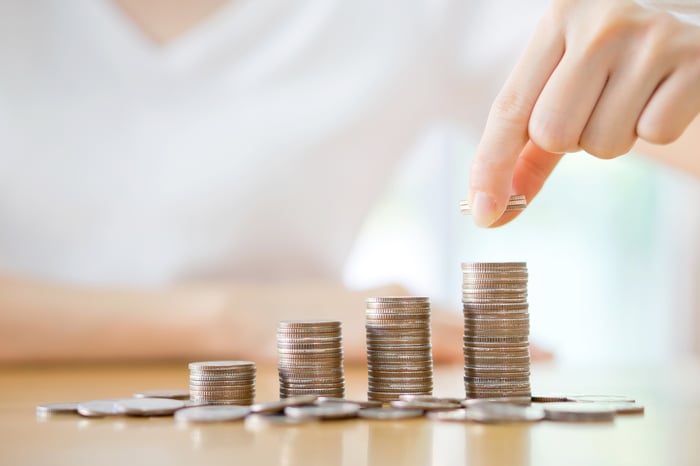 Market uncertainty is climbing ahead of November's elections, and that could provide investors with an opportunity to scoop up bargains on top dividend-paying stocks. Historically, dividend-paying stocks have outperformed non-dividend-paying stocks, and while there's no guarantee of that happening again, the extra pop provided by dividends may take some of the sting out of any drop-off in share prices. With that in mind, here are three companies that I think are worth buying if markets tumble.

International Business Machines Corporation (IBM -0.26%) is transforming itself into a cloud, analytics, engagement, and security giant from a stodgy PC and networking Goliath, and so far, the transition seems to be paying off.

IBM's shares are significantly outpacing the S&P 500 this year, in part because sales tied to its transition are climbing. Currently, "strategic imperatives" revenue is clocking in at an annualized $30.7 billion, with cloud revenue running at $11.6 billion annually as the company exited its second quarter. Since Gartner estimates the market for cloud services could reach $204 billion this year, up 16.5% from last year, IBM doesn't appear to be anywhere near maxing out its opportunity in that market.

If these predictions pan out, IBM should continue to have plenty of dividend friendly cash flow available to support its current 3.5% yield and to boost future dividend payouts. IBM upped its dividend payment by 7.7% in April, and its dividend has increased in 21 consecutive years, so it's likely IBM will maintain its dividend-friendly status with investors. That makes it worth buying from the bargain bin.

A big opportunity ahead

The company has already put its financial weight to work with a series of acquisitions that offer upside.

Last year, it spent $17 billion on Hospira so that it could leap to the forefront in developing biosimilars that will compete against top-selling biologic drugs that are losing patent protection. Pfizer estimates that $100 billion in brand-name biologics sales will be up for grabs in the coming five to 10 years, and that the market for biosimilars could jump from a rounding-error level today to $20 billion over the next five years.

Pfizer also forked out more than $5 billion earlier this year to buy Anacor so that it could get its hands on Anacor's new eczema and psoriasis cream, crisaborole, and it's spending about $14 billion soon to roll up Medivation, the maker of the multibillion-dollar prostate cancer drug Xtandi.

Given that Pfizer still has tens of billions in cash on its books, there's little reason to think that management won't be looking for more acquisition opportunities, especially if the markets head lower.

The company's internal research and development is also yielding some important wins, including the anticoagulant Eliquis and cancer drug Ibrance. Pfizer shares Eliquis sales with co-developer Bristol-Myers Squibb, and Pfizer's alliance revenue, which includes Eliquis sales, increased 21%, to $376 million, in Q2. Sales of Ibrance, which treats breast cancer, soared to $514 million in Q2 from $140 million a year ago.

Overall, Pfizer's guiding for sales of at least $51 billion and EPS of at least $2.38 this year, up from $49 billion and $2.20 last year, respectively, and its M&A and R&D efforts make me think its sales and profit are heading even higher. If that turns out to be correct, then buying Pfizer when its shares are yielding a healthy 3.5% may be smart.

ExxonMobil Corporation (XOM -0.35%) is an energy giant that makes its money by discovering and refining oil and gas, and because it boasts one of the industry's healthiest balance sheets, it ranks as my top pick for dividend-hungry investors looking to buy energy stocks.

Oil and natural gas prices have nose-dived in the past year because of surging global production and tepid global economic growth, but ExxonMobil's refining and chemicals operations have offset a lot of the drop in commodity prices, and as a result, the company still reported $1.8 billion in earnings in Q1 and $1.7 billion in earnings in Q2.

Admittedly, the first- and second-quarter sales trends put it on track to earn far less than the $16.2 billion it made last year, but oil and natural gas prices won't be low forever, and cost cuts now could offer plenty of profit-friendly leverage when prices do find their footing.

In the meantime, ExxonMobil still has the financial firepower to acquire top-tier assets from struggling peers and keep its dividend flowing to investors. Over the last 33 years, ExxonMobil has increased its dividend by an average 6.4% per year. Given shares can be bought at a discount to where they were in 2014, there's a lot to like about buying this stock on sale, including its 3.45% dividend yield.

Todd Campbell has no position in any stocks mentioned. Todd owns E.B. Capital Markets, LLC. E.B. Capital's clients may have positions in the companies mentioned. Like this article? Follow him on Twitter where he goes by the handle @ebcapital to see more articles like this. The Motley Fool owns shares of ExxonMobil. We Fools may not all hold the same opinions, but we all believe that considering a diverse range of insights makes us better investors. The Motley Fool has a disclosure policy.

3 Safe Stocks to Hold Through the Next Market Crash
356%