Please ensure Javascript is enabled for purposes of website accessibility
Log In Help Join The Motley Fool
Free Article Join Over 1 Million Premium Members And Get More In-Depth Stock Guidance and Research
By Matthew DiLallo – Sep 13, 2016 at 10:09AM

The Permian Basin is a hot spot for the oil sector right now. The legacy oil basin not only has an abundance of oil and gas, but it is relatively inexpensive to extract. That enables producers to earn lucrative returns even in the current environment.

However, despite being in the right place at the right time, several top Permian players are flying under the radar of most investors. Because of that, energy investors could miss out on enormous future growth potential.

Concho Resources (CXO) is a relatively unknown name in the energy sector, despite the fact that it is one of the leading acreage holders in the Permian Basin. In fact, the company spent lots of money this year bolstering its top-five position. In January it spent $360 million to purchase the drilling rights under 12,000 net acres in the Delaware Basin portion of the Permian and followed that up with a $1.625 billion acquisition of 40,000 net acres in the Midland Basin last month. These transactions bolstered the company's acreage position up to 690,000 net acres, providing it with an estimated 18,000 horizontal drilling locations and 5 billion barrels of oil equivalent resource potential. For perspective, that is almost as many future drilling locations as larger rival Pioneer Natural Resources (PXD -1.21%), which has twice the market value of Concho.

Laredo Petroleum (LPI -3.78%) also gets overlooked despite its prime position in the Midland Basin. While it is smaller in size, controlling about 127,000 net acres in the basin, that acreage is largely contiguous, allowing for centralized production corridors. However, what really sets Laredo Petroleum apart is its focus on technology to drive better drilling results.

The company and oil-field service leader Halliburton developed the Earth Model to improve drilling results. As the slide below shows, Laredo uses its Earth Model as a map to target the best hydrocarbon-bearing zones underneath its acreage: 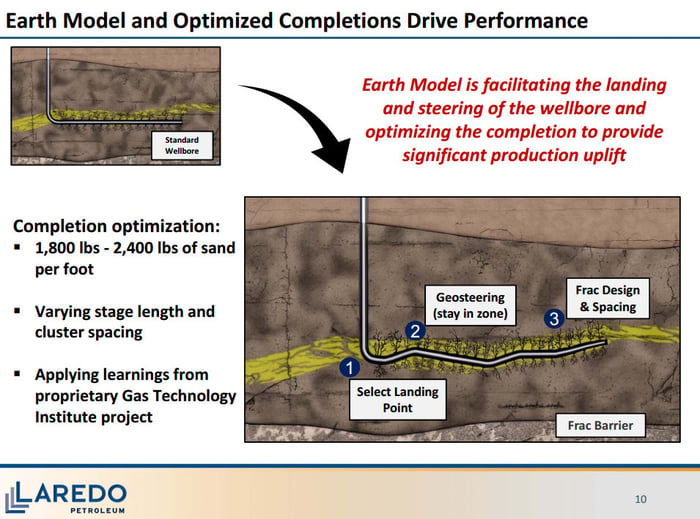 The results have been terrific, with Laredo Petroleum's production from Earth Model wells trending 16% to 47% higher than standard wells, which is boosting drilling returns.

Until recently SM Energy (SM -3.57%) was known for its position in the Eagle Ford shale. However, the company stopped drilling in the play last month and is planning to sell its non-operated acreage. The reason it is shifting away from the Eagle Ford is that it has much more upside in the Permian Basin, especially after it recently spent $980 million to double its position.

While that acquisition had a very hefty price tag, it provided SM Energy the scale that it lacked to drive economic growth out of the basin. As a result, analysts believe that SM Energy is now in a position to grow its oil production by 15% next year and 20% in 2018 versus the prior view for just 2% growth next year and a 1% decline in 2018. That is the definition of a transformational deal, and yet SM Energy remains under the radar of most investors.

As the energy industry emerges out of its doldrums, the Permian Basin will be a critical growth driver due to its robust economics at current prices. That has the potential to fuel excellent returns for producers that locked up prime spots in the basin. That said, most investors are focused on bigger names like Pioneer Natural Resources, causing them to overlook companies like Concho Resources, Laredo Petroleum, and SM Energy, which appear to have even more upside in the years ahead.

Matt DiLallo has no position in any stocks mentioned. The Motley Fool owns shares of Halliburton. We Fools may not all hold the same opinions, but we all believe that considering a diverse range of insights makes us better investors. The Motley Fool has a disclosure policy.