Under Armour (UAA 1.08%) stock has fallen nearly 20% over the past 12 months due to slowing sales, rising expenses, and tougher competition. To understand these challenges, investors should examine UA's second-quarter income statement -- which features four red flags indicating that its high-growth days might be over.

Under Armour's revenue grew 28% annually during the quarter to $1 billion, merely matching analyst estimates and ending the company's streak of eight consecutive top-line beats. It also represented a slowdown from 30% growth in the first quarter and 29% growth in the prior year quarter.

The company attributes much of that decline to the bankruptcy of retailer Sports Authority. But the chain's failure -- along with shaky reports from Nike (NKE 2.77%), Skechers, and VF Corp -- indicate that demand for athletic apparel and shoes is weakening. 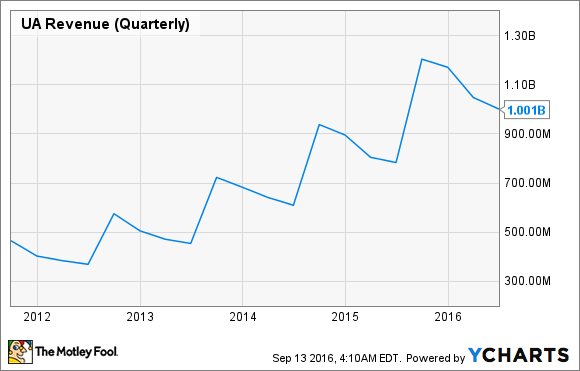 This means that the company is becoming more exposed to the saturated market of athletic footwear, which is dominated by deeply entrenched players like Nike. Back in March, Morgan Stanley reported that Under Armour shoes experienced a 23% price decline in less than two years, compared to a mere 4% decline across the industry. Higher sales of lower-margin footwear, outlet, and international products notably caused its gross margin to contract 70 basis points annually to 47.7% last quarter.

The company's high-profile deals, along with higher marketing expenses and a $23 million impairment charge from the Sports Authority bankruptcy, caused its selling, general, and administrative expenses to rise 32% annually to $458 million last quarter.

That big increase reduced the company's operating margin from 4.1% in the prior year quarter to just 1.9%, while net profit margin dropped from 1.9% to 0.6%. Under Armour's margins vary widely throughout each year, but its second quarter margins represent multi-year lows for the company. 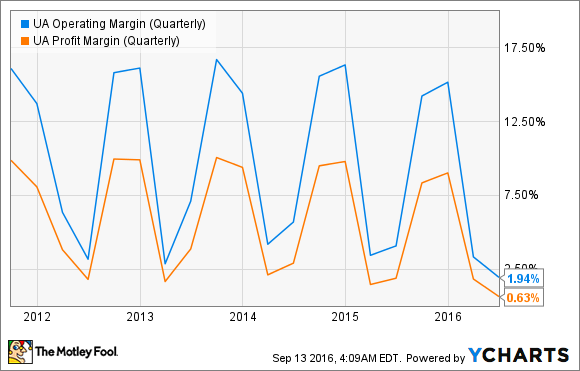 The athletics wear company's net profit margin was positive at the end of the second quarter, but it still ended the quarter with a net loss of $52.7 million due to a $59 million charge caused by a class-action lawsuit.

Under Armour previously had two classes of shares -- Class A for regular shareholders and Class B for CEO Kevin Plank. However, it issued new non-voting Class C shares as a one-for-one "dividend" to Class A and B shareholders earlier this year. That move angered some investors, who filed a lawsuit against the company claiming that the split diluted existing shares to protect Plank's control of the company.

Looking beyond the income statement...

Under Armour's income statement reveals a lot of potential problems with the company, but the red flags don't end there. The balance sheet reveals that inventories increased 30% annually last quarter, cash and equivalents fell 20%, and long-term debt rose 25%.

Moreover, Under Armour stock still trades at 50 times forward earnings -- which is much higher than Nike's forward P/E of 20. Therefore, investors should carefully examine all these red flags before before buying Under Armour stock.

Leo Sun has no position in any stocks mentioned. The Motley Fool owns shares of and recommends Nike, Skechers, and Under Armour (A Shares). Try any of our Foolish newsletter services free for 30 days. We Fools may not all hold the same opinions, but we all believe that considering a diverse range of insights makes us better investors. The Motley Fool has a disclosure policy.