Please ensure Javascript is enabled for purposes of website accessibility
Log In Help Join The Motley Fool
Free Article Join Over 1 Million Premium Members And Get More In-Depth Stock Guidance and Research
By John Rosevear – Sep 13, 2016 at 11:32AM

Ninety-five new DC Fast charging stations will allow seamless electric-car travel on the East and West Coasts without waiting hours for recharging. They'll work with most brands of electric cars.

The upcoming Chevrolet Bolt EV is one of many electric vehicles that will be able to take advantage of two new "corridors" of Chargepoint DC Fast charging stations. Image source: General Motors.

Two big automakers just announced that they've helped build "corridors" of DC Fast charging stations for electric vehicles up and down the East and West Coasts of the United States. It's a move that brings all of the big automakers one step closer to neutralizing one of Tesla Motors' (TSLA -1.10%) biggest competitive advantages.

BMW (BAMXF 1.45%) and Volkswagen (VWAGY -4.69%) have teamed up with Chargepoint, the biggest provider of electric-vehicle recharging stations, to create these new networks of fast-charging stations.

In a joint statement on Tuesday, the three companies announced that they have installed a total of 95 new DC Fast charging stations that will support electric-vehicle travel between Portland, Oregon, and San Diego on the West Coast, and from Boston to Washington, D.C., on the East Coast. 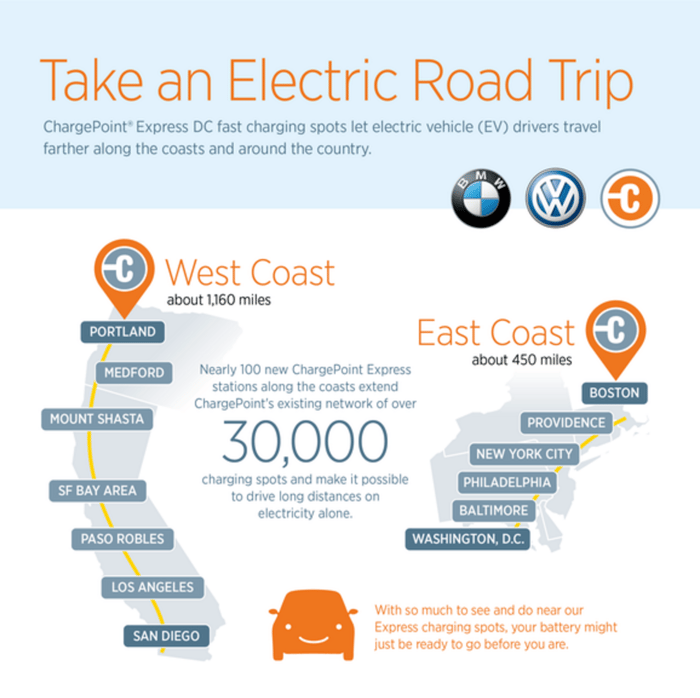 The SAE Combo connectors work with most current U.S. and European electric cars, as well as some of the newest models from Asian manufacturers.

According to the companies' statement, many of these stations also have CHAdeMO connectors for the (mostly Asian-brand) vehicles that use those ports.

How fast are these "fast-charging" stations?

Why are BMW and VW doing this?

BMW wants to, while VW has to.

BMW has been working with various partners around the world to build a more robust EV-charging infrastructure, in hopes of encouraging more people to give its electric i3 sedan (and upcoming future electric models) a try.

"BMW's vision for an innovative, more convenient future of electric mobility encompasses the continued rollout of a robust public infrastructure throughout the U.S. to benefit our customers and all EV drivers," said Robert Healey, BMW's chief of EV infrastructure in North America, in a statement. "The partnership with VW and ChargePoint demonstrates the efficiencies of industry cooperation for building robust public DC Fast charging while encouraging consumer interest in electric vehicles such as the BMW i3."

Volkswagen's reason for participating is a little different, though it put a similar spin on its effort. "Volkswagen's investment in this expansive public EV charging project sets the blueprint for future EV charging infrastructure in the United States," said Dr. Hendrik Muth, senior vice president, product marketing and strategy, Volkswagen of America, in a statement. "These charging corridors will add greater flexibility and convenience for current e-Golf and other EV drivers, and reduces one more barrier to increased EV ownership."

VW is making a big push into electric cars, and that push will work best if there's a robust recharging infrastructure. But VW doesn't really have a choice about participating in something like this.

VW has been mired in a massive scandal after admitting a year ago that it programmed its diesel-powered cars to cheat on emissions tests. As part of its settlement of civil charges filed by the U.S. Environmental Protection Agency (EPA) and California Air Resources Board (CARB) over that cheating, VW agreed to spend $2 billion over 10 years on zero-emissions vehicle infrastructure, access, and awareness in the U.S.

VW's contribution to this network is the beginning of that spending.

What does it mean for companies selling electric vehicles?

It means that the big automakers -- all of them -- are closing in on what has been one of Tesla's biggest competitive advantages.

While Chargepoint and other companies have been installing electric-vehicle chargers for years, most of the existing stations are low-power ones that take hours to fully recharge a vehicle. Tesla's Supercharger network has been seen, rightly, as a big competitive advantage, helping Tesla reassure potential buyers that recharging their new cars isn't much harder or more time-consuming than refueling a gasoline-powered car. But the Supercharger stations are proprietary: They'll only recharge Teslas.

Now, companies like BMW and VW and GM, and just about all of the other big automakers considering a push into electric cars, are a couple of big steps closer to being able to make the same argument. And this is just the beginning: Expect a lot more of these DC Fast charging stations to get built in the U.S. very soon.