Newmont Mining Corp. (NYSE:NEM), a global leader in gold production, is one of many stocks that investors are turning to as the price of gold continues to climb. Let's take a look at the company to see where its strengths lie, and whether they give the company an edge over its competition.

Here, there, and everywhere

With operations in North America, South America, Africa, Australia, and Indonesia, Newmont has an extensive global presence. Although this doesn't significantly distinguish the company from its peers and provide a competitive advantage, it does represent a legitimate strength which helps to mitigate geopolitical risk.

Further illustrating the geographical diversification of its operations, Newmont estimates that in 2016 North America and South America will account for 40% and 8%, respectively, of the company's gold production; Africa, Australia, and Indonesia will represent 16%, 31%, and 5%, respectively.

Certainly not every gold-mining company is as well positioned in terms of the geographical diversity of its mines. Kinross Gold Corp. (NYSE:KGC), for example, operates on only three continents and is exposed to much greater risk. Kinross estimates that its six mines in North and South America will represent 61% of its gold production in 2016; the two mines in West Africa will account for 14%, and the two mines in Russia will contribute 25%.

One golden opportunity after another

Haul trucks, grinding mills, manpower: There are considerable resources used in a mining operation. But a mining company's most precious resource, which it relies upon to develop the mines, is time. Pulling gold out of the ground doesn't happen overnight; it often takes years from the time a suitable site is identified to the point when gold production begins.

Therefore it's imperative to have a strong project pipeline, which ensures that as mines are retired, new ones are ready to take their place. This is another of Newmont's strengths. 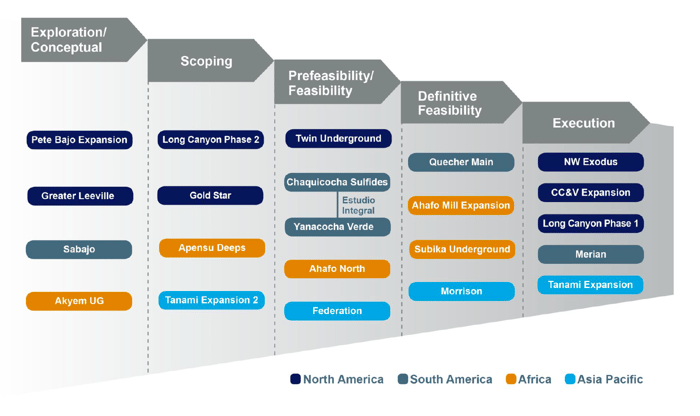 In the coming months, Newmont expects to begin production at two new mines: Long Canyon, in Nevada, and Merian, in Suriname. Newmont acquired the Long Canyon deposit in 2011 and expects to begin production in early 2017; with a very inexpensive, all-in sustaining cost (AISC) of $500 to $600 per ounce, the mine's life is estimated to be eight years. Newmont is preparing to begin operations at its Merian project by the end of 2016; estimating the life of the mine to be 11 years, management believes that it will sustain operations at a very reasonable $650 to $750 per ounce.

It's not just at new projects that Newmont plans to begin operations; the company is expanding operations at sites where gold is already produced. Extending the life of a mine is a valuable opportunity for mining companies, as it allows them to continue production at a lower cost.

For example, Newmont expects to begin production in mid-2017 at its Tanami expansion project in Australia. In 2015, the Tanami mine produced 436,000 ounces of gold, at an AISC of $724 per ounce of gold sold. Management believes it can reduce the AISC by about $50 per ounce, while production will fall between 425,000 and 475,000 ounces.

According to management, one of the company's greatest strengths is its workforce. In his letter to shareholders from the company's 2015 annual report, Gary Goldberg, Newmont's president and CEO, states that "Our people continue to be our most important source of competitive advantage."

It's no secret that mining is an extremely dangerous business. After all, the industry includes fatalities as a metric by which companies measure themselves. So it comes as no surprise that Newmont's management places a high priority on attending to the health and safety of its employees. According to the company's 10-K from 2015, in 2013 management "set a five-year target to lead the industry in health and safety as measured by zero fatalities and the lowest Total Recordable Injury Frequency Rate and Occupational Illness Rate (TRIFR) among its peers in the International Council on Mining and Metals (ICMM)." Judging by its performance through 2015, Newmont is committed to attaining that target. Of the 23 companies which comprise the ICMM, Newmont had the second-lowest TRIFR.

Management's efforts to minimize injuries fulfill the ethical responsibility to ensure a safe work environment for Newmont's employees. Those efforts also have the benefit of contributing to greater efficiency at its mines -- which, in turn, contributes to a higher operating margin.

Newmont Mining Corp., the only gold-mining company in the S&P 500, may not have formidable competitive advantages, but its strengths suggest that it is worthy of its reputation as a global leader in the gold-mining industry. In the future, evidence of the company successfully moving geographically diversified projects through its pipeline would suggest that Newmont retains the strengths which differentiate it from its peers. Likewise, management's ability to continuously lead the industry in providing for the health and safety of its employees would further indicate the strength of Newmont's operation.

These strengths may not be sustainable competitive advantages that shield it from fellow miners, but they are valuable enough to substantiate Newmont's leadership position in the gold-mining industry.