Please ensure Javascript is enabled for purposes of website accessibility
Log In Help Join The Motley Fool
Free Article Join Over 1 Million Premium Members And Get More In-Depth Stock Guidance and Research
By Chuck Saletta - Sep 13, 2016 at 9:51AM

Pipeline giant Kinder Morgan had a rough ending to 2015. What it has been able to accomplish thus far into 2016 is a testament to its incredibly strong operating discipline. 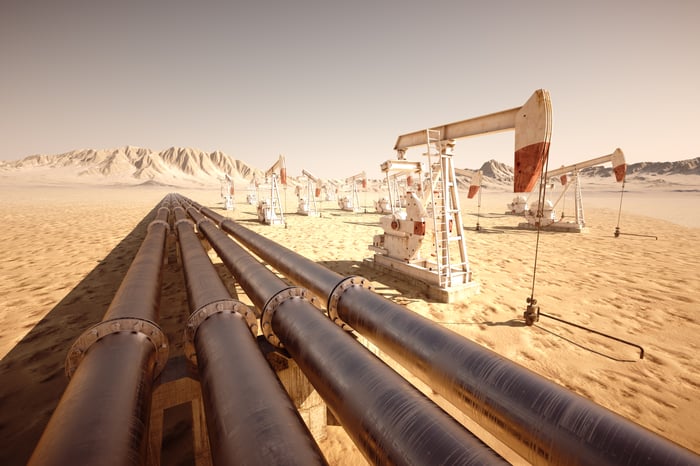 Pipeline giant Kinder Morgan (KMI 1.31%) ended 2015 on a rough note as Moody's changed its debt outlook to "negative." That move threatened Kinder Morgan with a debt downgrade that could have saddled it with a "junk bond" rating, which could have both increased its costs of borrowing and made it more difficult for the company to borrow in general.

Spurred to action by that threatened downgrade, Kinder Morgan slashed its dividend and committed to keeping its debt rating investment grade. While that combination spooked away pure dividend-focused investors and knocked Kinder Morgan's shares down to a nasty loss for all of 2015, it did set the pipeline giant up for its biggest win of 2016 so far.

The biggest accomplishment Kinder Morgan has been able to achieve thus far this year has been to prove to the world that it can operate without abusing the debt market. In December of 2015, when Moody's issued its negative proclamation, it included $44 billion in Kinder Morgan's debt in its calculations. By July of 2016, Moody's only felt the need to consider $42 billion of the company's debt in reaffirming its stable, investment-grade rating.

Today's Kinder Morgan has a stabilized debt rating, around $2 billion less in debt that the ratings agency worries about, and a business that still throws off about $1 billion in operating cash flow per quarter. For a company whose primary, debt-fueled expansion strategy had recently been thrown for a loop thanks to Moody's threatened debt downgrade, that's an impressive adjustment in under a year.

Although Kinder Morgan has done a superb job of cleaning up its own financial condition, its competitors aren't standing still. Enbridge (ENB 0.27%)recently announced that it's merging with Spectra Energy (SE), in a deal that, if completed, will unseat Kinder Morgan as the largest energy infrastructure company in North America. The Enbridge and Spectra deal will be a stock-based transaction, with Spectra shareholders getting 0.984 shares of Enbridge for each share of Spectra they own.

In the pipeline business, scale and size matter. You need access to a lot of capital to secure rights, build out pipelines, and operate and maintain them safely. That build-out, operation, and maintenance takes staffing, equipment, and know-how, and the larger your operating infrastructure, the easier it is to cover the overhead costs associated with all of that know-how and equipment. The Enbridge and Spectra Energy merger gives that combined company substantial scale to use for its advantage when competing against Kinder Morgan.

In addition, as Enbridge is based in Canada, the combination of Enbridge and Spectra will give that company a substantial leg up over Kinder Morgan when dealing with international pipelines. While Kinder Morgan does have a limited presence in Canada, Enbridge's stronger Canadian presence combined with Spectra's solid U.S. one raises the possibility that the combined company can build a formidable business crossing the border.

What's next for Kinder Morgan?

Despite the slowdown imposed by its need to strengthen its balance sheet, Kinder Morgan isn't standing still. Throughout 2016, it expects to spend around $3.3 billion in expansion capital, and it has identified about $13.5 billion of investments in additional growth prospects over the next five years. In particular, given the Enbridge & Spectra merger, Kinder Morgan expects to invest about $5.4 billion of that in Canada, driven by expected demand from under-construction Canadian oil sands projects.

Today's Kinder Morgan faces two substantial challenges. One is from its need to continue to expand despite the slowdown imposed by Moody's previously threatened downgrade of its balance sheet. The other is from the newly emerging competitive powerhouse from the combination of Enbridge and Spectra.

Still, Kinder Morgan's operations throw off billions in operating cash flow, and its balance sheet is improving. That combination means Kinder Morgan generates substantial money on its own to continue to invest in its growth, and it may soon be able to resume significantly tapping the debt market to further speed its expansion.

As a shareholder who held throughout Kinder Morgan's struggles -- and even bought more along the way -- I'm looking forward to Kinder Morgan's return to strong, profitable growth. At some point, it may even be able to resume increasing its dividend, returning to the trend it had established prior to last year's cut.