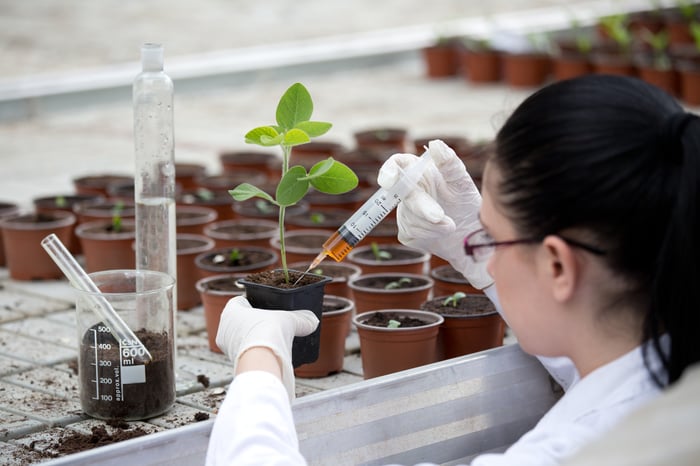 If the merger between Bayer and Monsanto makes it past regulators and shareholders it will create a global crop sciences giant, but if not, Monsanto can always sit back and count the $2 billion breakup fee Bayer guaranteed it. Image source: Getty Images.

After months of drama, German chemicals giant Bayer (OTC:BAYR.Y) announced that it and Monsanto (NYSE:MON) have agreed on terms of a merger at $128 per share. The $66 billion deal will create a global giant that represents one-third of all farm inputs, from seeds to crop protection. Make no mistake though, this deal is not without controversy, and there's no easy path to approval from regulators. For Bayer, it may take just as much work getting shareholders of both companies to sign off the union as it will take getting the deal past regulators.

For all the sound and fury generated by Monsanto that Bayer's previous offers undervalued the biotech, the agreed-upon price -- the fourth bid the German company made for its U.S. counterpart -- is only $0.50 per share higher than the last one. It may be that the $2 billion breakup fee Bayer has offered to pay Monsanto if the merger doesn't go through was the deciding factor in the board of directors' decision to accept the offer, one that's below the $130- to $140-per-share level management had reportedly deemed acceptable.

Bayer is the second biggest producer of crop protection chemicals behind Syngenta (NYSE: SYT), which Monsanto once tried to acquire but which instead agreed to be bought by China National Chemical. Together, Bayer and Monsanto will be the global leader in seeds and will account for one-third of all global crop inputs. The deal will push Bayer's crop science division from representing 30% of total revenues to about half, a significant restructuring of its business that may not sit well with its investors.

Until Bayer began pursuing Monsanto, it had been shedding assets that were not essential to its primary pharmaceutical business as it transformed into a life sciences company. It shed its plastics business, Covestro in an IPO, as well as its diabetes care business, and it recently announced the sale of its dermatology business. The announcement in May that it wanted to buy Monsanto caused some large shareholders to call the move an "immediate destruction" of shareholder value and to complain that the $122-per-share offer price was too high. It would also hit Bayer's credit rating, as it will be financing the deal mostly with debt, and it already carries a heavy load.

It's not much better on Monsanto's side, as investors -- though supportive of a buyout, as the stock had lost about a third of its value from highs of $125 in 2014 -- were reportedly looking for a price closer to $140 than below $130 a stub.

The middle ground between the two extremes that Bayer chooses looks as though it will appease no one, but Monsanto might hold an ace in its hand.

Although their businesses don't overlap much, they may still face antitrust hurdles, as the industry will be consolidated in fewer hands. As noted, Syngenta is being acquired by ChemChina in a $43 billion deal, while Dow Chemical (NYSE:DOW) and DuPont (NYSE:DD) are in the midst of their own $130 billion merger of equals. 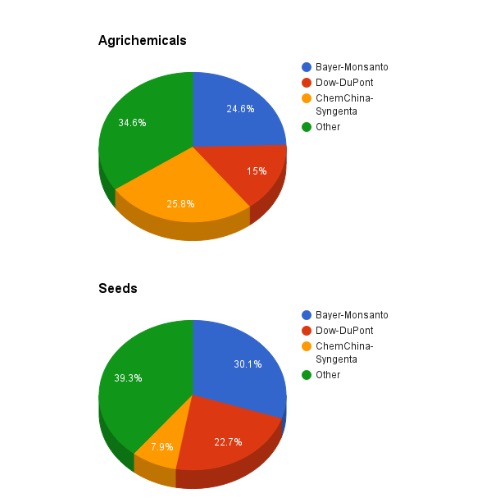 According to ETC Group data, Bayer-Monsanto will own 29% of the global seed market, Dow-DuPont will own 21%, and Syngenta-ChemChina will own 9%. In pesticides, the breakdown is 24%, 23%, and 16%, respectively.

The Justice Department has proved to be a harsh critic when significant concentration occurs in an industry, stopping Halliburton from taking over Baker Hughes, Aetna from acquiring Humana, Anthem from buying Cigna, and most recently, John Deere from buying Monsanto's precision planting technology.

The concentration that will occur is certain to worry regulators, which is why the $2 billion breakup fee is important. While Bayer says the high figure represents its confidence that the deal will go through, Monsanto is assuredly looking at it as a windfall to finance its future growth should the merger fail. In context, the breakup fee is equal to almost all of Monsanto's full-year 2015 profits of $2.3 billion.

In short, it's something of a win-win scenario for the biotech. Although the purchase price is below what it would prefer, it still represents a 44% premium to where its stock was trading, and it has the backstop of a big breakup fee if the deal is quashed.