Bank of America (NYSE:BAC) doesn't have many advantages over Wells Fargo (NYSE:WFC), but there's one place where it does: share buybacks. Thanks to the low valuation on Bank of America's stock, it's able to get much more bang for its buck compared to Wells Fargo when it comes to repurchasing common stock.

These numbers alone illustrate Bank of America's advantage. Even though the North Carolina-based bank has spent half as much on buybacks thus far this year compared to Wells Fargo, it's been able to retire close to twice as many shares. 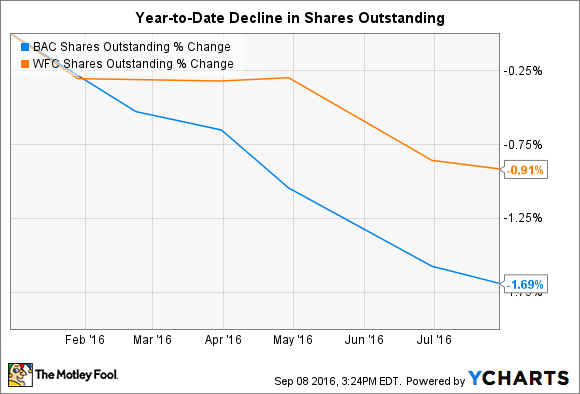 One reason Bank of America's buybacks have been so effective is because its shares are priced at a substantial discount to book value. They trade right now for 33% below book value -- and that's despite a steep rally in its stock price since the end of June. Consequently, over the six months from January through June of this year, Bank of America was able to buy back its stock at an even steeper 40% discount.

Wells Fargo has faced the opposite situation. Thanks to its history of high profitability, its shares trade for a 30% premium to book value. And that's after they've fallen in the wake of its recent scandal. For most of the year, they traded at a 40% premium, which is right in line with the multiple at which Wells Fargo has repurchased its stock.

It's also worth pointing out that Bank of America's stock repurchases have resulted in a comparatively larger decline in its outstanding share count because it issues fewer shares to employees in lieu of cash compensation, which offsets the impact of buybacks.

In sum, while there are many reasons to pick Wells Fargo over Bank of America if you're an investor, the one thing that could propel Bank of America's stock faster is its ability to repurchase its outstanding stock cheaply without having to materially offset the impact by issuing a copious number of new shares.