Yet solar stocks have performed abominably over the past year. What is going on? 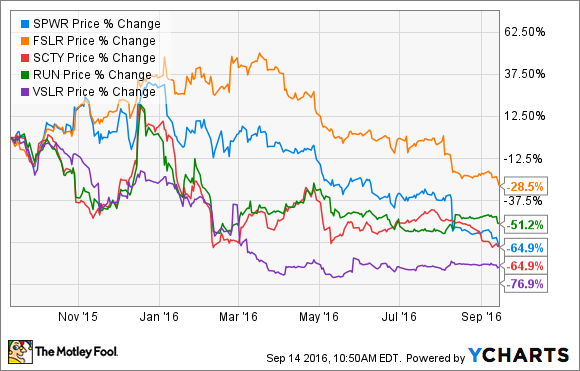 Not all solar is created equal

The big conversation piece so far in 2016 has been the solar investment tax credit (ITC) extension. The ITC was supposed to drop from 30% to 10% for utility projects and third party-owned rooftop systems in 2017, meaning there was a rush to install projects in 2016. When the ITC was extended late in 2015, the urgency was eliminated. And the impact on the solar industry has been far-reaching..

If you look at the chart below, you can see that solar installations are growing rapidly in the U.S., but their growth is inconsistent. Utility-scale solar, in particular, has been up and down depending on the quarter. Residential solar has grown more consistently and commercial solar is somewhere in the middle. In some ways, the ITC expiration is still driving growth in 2016. 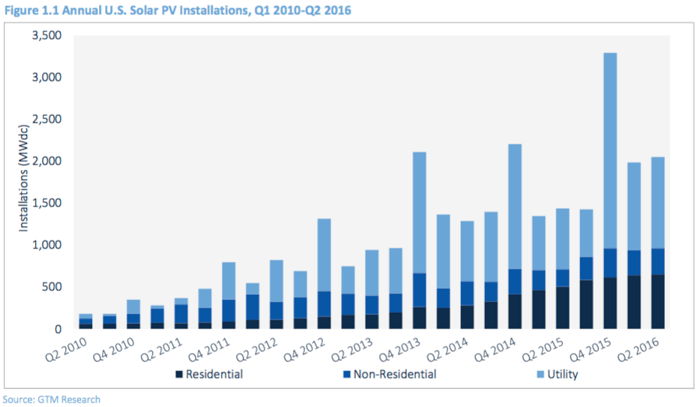 What's happening in utility solar is a boom in 2016 with a bust expected in 2017. The report referenced above expects 9.9 GW of utility-scale projects to be installed this year, but that will drop to 8.8 GW in 2017. And 2017 is only that high because 5.7 GW of projects that were expected to be completed this year have spilled into next year. In total, 18.5 GW of solar was expected to be installed in 2016 before the ITC extension, which is now being moved around.

What's interesting is that underlying demand for utility-scale solar will drop from a projected 18.5 GW in 2016 before the ITC extension to 3.1 GW of new demand in 2017. That's an insane drop and shows why SunPower (NASDAQ:SPWR) and First Solar (NASDAQ:FSLR) have a rough year ahead. Utilities just don't need more solar right now and aren't going to be asking for more projects before 2018.

Residential and commercial solar also saw a negative impact from the ITC extension early in 2016 because customers didn't have a deadline for getting solar installed. So they're really where the strength lies. But it may not help SolarCity (NASDAQ:SCTY.DL), Vivint Solar (NYSE:VSLR), and Sunrun (NASDAQ:RUN) in the way you think.

Smaller solar projects have much shorter lead times, so the ITC extension may dampen demand for a few months, but it won't lead to a year or two of struggles, like it will in utility-scale solar.

Another trend that's changing the solar market for solar players is more customers buying solar systems rather than leasing or buying energy through a power purchase agreement. SunPower has been selling systems for years, but SolarCity, Vivint Solar, and Sunrun were almost 100% reliant on leases and PPAs until very recently. That's why SunPower says it will take market share and grow in these markets while others are more tepid on growth projections.

Fundamentally, residential and commercial solar should be fairly strong going forward, but market share may shift as buying trends change. That creates some confusion as one company raises guidance and another one lowers it. The tide is rising, but ships are still sinking.

The takeaway from the last 10 months in the solar industry should be that the long-term picture is bright, but there'll be a lot of bumps along the way. Right now, the bumps will be in utility-scale solar and changing trends in the residential solar market. But by 2019 the market will be back to growth across the board.

Investors will want to stick to solar companies with solid balance sheets and technology differentiation. Long term, those are the companies that are going to win, even if it takes a few more years to sort out the industry's winners and losers.