The Internet of Things wave is ramping up. Three Motley Fool tech writers share their picks for a company that's leading the charge. 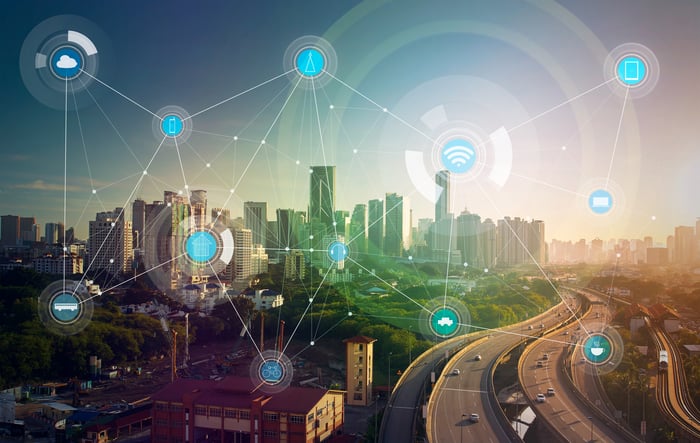 The internet connected people and businesses across the globe, and now the Internet of Things (IoT) could mark a similarly revolutionary shift by connecting the world's devices and paving the way for an explosion in data generation and analytics-driven efficiency improvements. Estimates on how the IoT will progress and the value of the resultant business opportunities in the coming years vary significantly, but the trend toward greater connectivity is already in motion, and some companies are poised for major windfalls as the tech progresses.

To help readers find potential investment opportunities in what's being heralded as the next big thing in tech, we've assembled a team of three Motley Fool tech writers and asked them to spotlight a company that is shaping the future of the Internet of Things. Read on to learn why Synaptics (SYNA -2.34%), Skyworks Solutions (SWKS -1.06%), and NXP Semiconductors (NXPI -1.37%) made the list.

Tim Brugger: At first glance, Synaptics may seem like a long shot for a top IoT stock to consider. Like other suppliers once reliant on high-end smartphones sales, Synaptics has been hit hard with the inevitable slow-down in the once high-flying space. That's resulted in a 28% share price nosedive this year.

A survey of new car buyers in the U.S., China, and Germany demonstrates how critical infotainment systems are: the majority of consumers value the systems more than actual driving performance. And nearly 40% said they'd ditch their auto manufacturer altogether if it didn't offer the in-car technology. Synaptics' suite of smart car products includes biometric security, display drivers, and touch interface solutions, to name a few features.

Synaptics already boasts some of the world's largest auto manufacturers as customers, and the opportunity to shift its former reliance on high-end smartphones to what is quickly becoming the ultimate mobile experience is limitless. With its  workforce reduction and office closings now in the rearview mirror, Synaptics can focus on dominating the global infotainment space. For long-term investors in search of value -- its stock is trading at a meager 10 times future earnings -- and a player in one of the world's fastest growing markets, Synpatics warrants strong consideration.

Value, income, and the IoT?

Brian Feroldi: With predications calling for tens of billions of new devices to come online over the next few years, the demand for specialized communications semiconductor chips is likely to grow significantly. That bodes well for the future prospects of Skyworks Solutions, a leader in the space.

However, Skyworks is aware that its next phase of growth will come from the IoT, which is why it's pushing hard to win designs in growth markets like smart TVs, drones, automotive, industrial devices, and more.

While the company is having success at entering these new markets, the sales volume isn't yet big enough to offset the company's reliance on smartphone sales. That's why Skyworks' revenue actually declined by more than 7% last quarter thanks to inventory reductions from its biggest customers. That's caused traders to dump the stock, pushing the company's forward PE ratio below 12 and its dividend yield above 1.5%.

While there's no doubt that this year's results will be heavily impacted by smartphone volumes, this company's future is all about the IoT. If Skyworks  can successfully establish a leadership position in that space, then growth on the top and bottom lines are bound to return.

Keith Noonan:  NXP Semiconductors manufactures a broad range of chips that deliver high levels of security at low power consumption levels -- ideal characteristics for IoT technologies. The company's largest revenue stream comes from chips for automobiles, with roughly 36% of sales in the last quarter coming from this segment, though it also makes chips for use in smart homes, wireless payment, security, and other applications

Connected cars are the fastest growing segment of the Internet of Things, and NXP Semiconductors' position as a leading provider of chips in the space makes it a strong candidate for riding the IoT wave. In 2015, the company completed its acquisition of Freescale Semiconductor to form the world's largest automotive chip supplier, and now claims roughly 14.5% of the market for automotive semiconductors. Its position in automotive infotainment is particularly strong, with leading solutions for visual and audio processing, and the company has also recently secured design wins with 9 of the top 10 automobile OEMs to supply chips for radar technology used for cruise control, collision warning systems, automatic steering, and braking intervention.

NXP is priced at a reasonable 20 times trailing twelve month earnings, and the company's earnings are projected to takeoff as the connected car market accelerates. Analysts tracking the company estimate that its earnings will grow 24.67% annually over the next five years, which would works out to a five-year PEG ratio of 0.81 -- a good bit below the PEG value of 1 that is used as a measure of whether a stock is undervalued.

With a strong position in a fast-expanding market and a valuation that leaves room for growth, NXP is an IoT stock that should be on your radar.

Keith Noonan has no position in any stocks mentioned. Tim Brugger has no position in any stocks mentioned. The Motley Fool owns shares (and options) of and recommends Apple, NXP Semiconductors, and Skyworks Solutions. We Fools may not all hold the same opinions, but we all believe that considering a diverse range of insights makes us better investors. The Motley Fool has a disclosure policy.