Please ensure Javascript is enabled for purposes of website accessibility
Log In Help Join The Motley Fool
Free Article Join Over 1 Million Premium Members And Get More In-Depth Stock Guidance and Research
By Ashraf Eassa – Sep 20, 2016 at 11:35AM

In a Sept. 5 column, I argued that microprocessor giant Intel (INTC -4.49%) may have been planning to stop building processors incorporating its high-performance Iris Pro graphics.

The argument was based on two key pieces of information. The first was the fact that in Intel's own public messaging around its seventh-generation Core processor family, the company explicitly mentioned that products with its lower-performance Iris graphics were coming but made no mention of Iris Pro. The second was a leak from NotebookCheck.net illustrating that Intel had no plans to release a seventh-generation Core processor with Iris Pro graphics.

Recently, a slide illustrating Intel's laptop processor plans through the second quarter of 2018 began circulating on the internet: 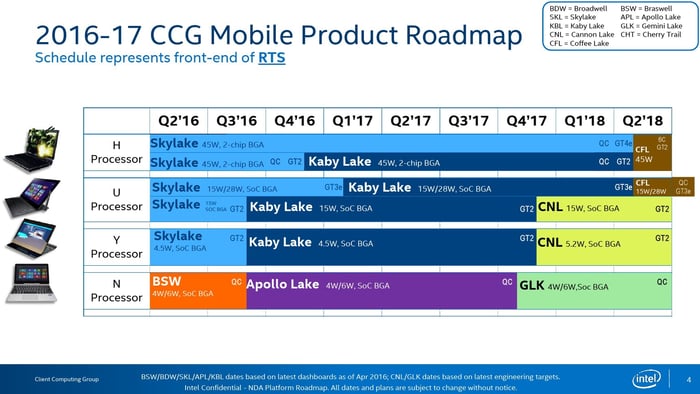 From a product performance perspective, the Skylake processors with GT4e graphics offered significantly better performance in 3D applications -- think video games. From an economic perspective, the GT4e chips featured much larger die sizes, meaning they were significantly more expensive to produce, and also included an Intel-designed cache memory embedded alongside to the main processor on the same package, which adds even more cost.

However, beginning with Kaby Lake and continuing with Coffee Lake, it would appear that only GT2 graphics, which Intel brands "Intel HD Graphics," will be an option.

Although Intel appears to be done with Iris Pro graphics, the road map still indicates that the chipmaker's Iris graphics (non-Pro) will still come to market. In particular, for notebooks that use chips rated at either 15 or 28 watts, Intel is still apparently planning products with GT3e graphics.

GT3e indicates a lower graphics core count than a hypothetical GT4e would have, but it should still offer significantly more graphical horsepower than a GT2 chip does. The "e" in GT3e also indicates that these chips will use the Intel-designed on-package memory, which is useful in trying to keep the graphics processor fed with data.

At the end of the day, Intel seems to view higher tiers of graphics performance as a way to try to drive upsell. In very power- and space-limited systems -- the kinds of systems that are likely to use 15- and 28-watt processors -- it can often be impractical to include a standalone graphics processor.

For the vast majority of personal-computer buyers, standard Intel HD graphics are likely to be enough. However, system vendors are likely to want to advertise a more "premium" graphics solution for their higher-end systems, particularly ones with extremely high-display resolutions.

Indeed, my guess is that Intel saw very low interest from the key personal-computer manufacturers for future processors with Iris Pro graphics. I still can't find any laptops with Iris Pro based on the company's Skylake architecture, for example. And the lack of interest probably drove the company to halt development efforts on such chips going forward.

After all, it simply doesn't make sense to build products for which there is little to no demand.