Please ensure Javascript is enabled for purposes of website accessibility
Log In Help Join The Motley Fool
Free Article Join Over 1 Million Premium Members And Get More In-Depth Stock Guidance and Research
By Andrew Tonner – Sep 21, 2016 at 10:20AM

With many investors today asking "What is a payout ratio?" we answered. Here are 7 consumer goods companies with sustainable payout ratios and strong track records of dividend growth. 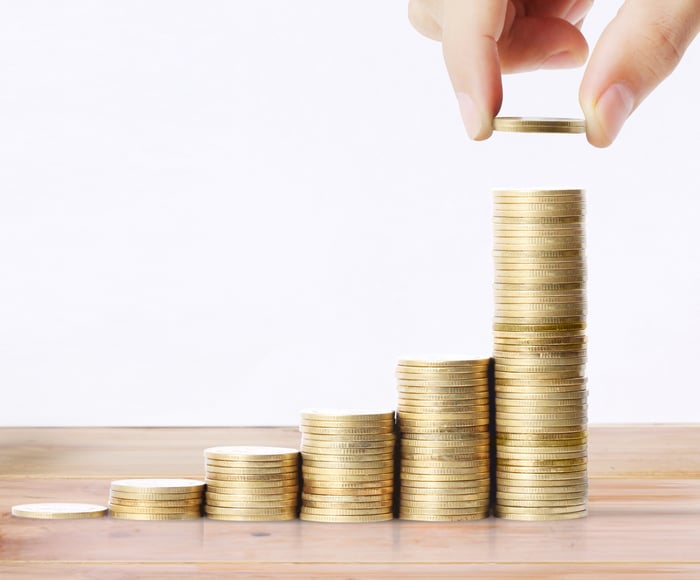 In today's low-yield environment, investors find themselves in something of a pinch. Yielding just 1.70%, the 10-year Treasury hovers a mere 0.20% above its all-time low. Even if the Fed raises interest rates heading toward 2017, dividends will remain a highly attractive option relative to other income-producing assets.

So as a jumping off point, what exactly is a payout ratio? To calculate payout ratio, you simply divide the total dollar value of a company's dividend payments by its net income.

As you can probably imagine, that exact number differs with each company's unique business circumstances. Here are a few dividend payout ratio examples from several well-known consumer goods stocks.

Data source: B of A Merrill Lynch and Google Finance.

However, let's dig deeper into several of the above names that I think stand as particularly enticing in terms of their dividend yields and divided payout ratios.

How's this for a currency impact? In Mondelez's most recent earnings report, foreign exchange headwinds flipped what would have been 1.5% top line growth on a constant currency basis into a 17.7% GAAP sales decline. However, once this unique circumstance gradually abates, Mondelez's true value as a leading consumer packaged goods (CPG) player should ultimately shine through. Among CPB players, Mondelez enjoys the greatest international exposure, collecting 44% of sales from abroad. Furthermore, Mondelez enjoys either the first or second greatest share of every product category and geography in which it operates. This powerful mix of international exposure and product dominance should help fuel above average EPS growth over the long-term; analysts expect average bottom line growth of 11.4% for the next 5 years.

Mondelez's relatively low payout ratio offers plenty of leeway for the company to continue to grow its dividends for years to come. Though the name Mondelez is relatively new, the actual operating company, which was known as Kraft until late 2012, has paid dividends to shareholders since as far back as 2001. The company has already raised its dividend this year, but the current data shows the company has plenty of leeway to continue to expand its cash payouts for years to come.

The spirits firm behind the iconic -- or perhaps to some infamous -- brand Jack Daniels, Kentucky-based distiller Brown-Forman (BF.B -1.26%) sits squarely in the middle of the global bull market for whiskeys, a fact that bodes quite well for its long-term dividend growth prospects. Fueled by a newfound taste for the hard stuff from both international and domestic buyers, sales of American whiskeys have grown at more than double the pace of the global spirits market according to the Distilled Spirits Council.

With a bulk of its sales coming from Jack Daniels, conveniently the top whiskey brand in the U.S., Brown-Forman's fortunes are disproportionately linked to the success of this single brand. So far, this playbook seems to be working quite well. Brown-Forman has already expanded its production capacity, and analysts believe the company can continue to ride this wave toward higher stock prices and continued dividend growth.

Due to an off-calendar reporting schedule, Brown-Forman has already started its fiscal-year 2017, but analysts see its sales and net income growing at roughly 5% in each of the next two years. This rising tide should raise investors' boats as Brown-Forman has shown a remarkable commitment to growing its dividend. In fact, Brown-Forman has increased its dividend annually for 31 consecutive years, so between the secular tailwinds favoring its business and management's demonstrated practice of raising cash payments, Brown-Forman's relatively conservative payout ratio shouldn't stop investors from taking a spirited interested in this stock.

Procter & Gamble's (PG -2.07%) appearance on this list should surprise exactly no one, but after all, the point of dividend investing is its timelessness, not its originality. Either way, the company's prominence as a dividend payer lies far beyond dispute. True, P&G's 70.3% payout ratio appears high at first glance -- the S&P 500's payout ratio is 39.1% -- but Procter & Gamble's 59-year streak of consecutive annual dividend increases should quell any fears regarding continued payouts and dividend growth prospects. At this point, P&G has earned investors' trust that it will increase its dividend, high payout ration be darned.

In terms of the actual operations that fund its dividend, some analysts see P&G as nearing a positive inflection point in its recent new-growth programs. P&G's current $10 billion cost-cutting program will help expand the company's profit margins while freeing up additional cash for investment in future organic growth drivers at the same time. With its 23x price-to-earnings ratio effectively in line with the market, P&G certainly isn't cheap. However, thanks to the company's exceptional economics and track record of execution, long-term, dividend investors should view P&G today as an example of Warren Buffett's preference to buy a great company at a fair price, rather than a fair company at a great price.

Andrew Tonner has no position in any stocks mentioned. The Motley Fool recommends CVS Health and Procter and Gamble. Try any of our Foolish newsletter services free for 30 days. We Fools may not all hold the same opinions, but we all believe that considering a diverse range of insights makes us better investors. The Motley Fool has a disclosure policy.