Angry investors in Volkswagen (OTC:VWAGY) have filed a slew of lawsuits against the auto giant in its home country of Germany. Taken together, the suits are seeking over $9 billion in damages, a German court said on Wednesday.

Officials at a regional court in Braunschweig, near VW's world headquarters in the German city of Wolfsburg, said on Wednesday that about 1,400 lawsuits have been filed against Volkswagen, many in recent days, according to a Reuters report. VW shareholders are seeking damages for investment losses caused by the fallout from VW's diesel-emissions scandal.

Plaintiffs in these cases say that VW didn't inform its shareholders promptly about the issues arising from its decision to program millions of diesel-powered vehicles to cheat on government emissions tests.

Apparently, a belief that claims had to be filed within a year of the initial revelations led to a rush at the courthouse. The initial charges against VW, filed by U.S. and California air-quality regulators, were first made public on Sept. 18 of last year. VW's share price dropped over 30% in the first two trading days following the revelations. 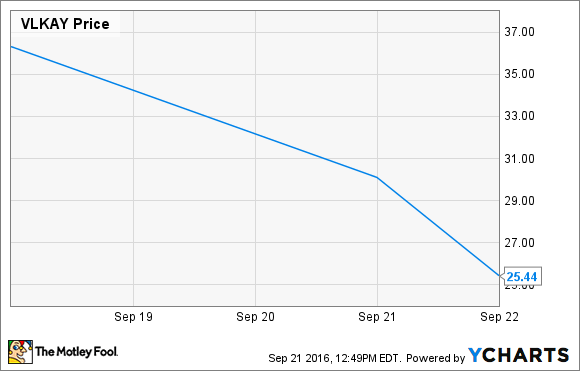 VW's American depositary receipts opened at $36.67 on Friday, Sept. 18, 2015, hours before the bombshell charges were announced. They closed at $25.44 the following Tuesday, two trading days later, for a loss of just over 31%.

How much will these suits cost VW?

It's impossible to say right now. The court said that the suits are seeking a total of 8.2 billion euros (about $9.1 billion) in damages. VW may be able to settle many of the cases for much less than the plaintiffs are seeking. But it's impossible to predict what will happen if some of the larger claims, with well-funded legal teams, go to trial.

Many of the cases, filed by individual shareholders, are seeking relatively modest damages. But a few are substantial. The biggest of the claims, filed on behalf of a group of institutional investors, is seeking 3.3 billion euros in compensation from VW, court officials said.

The upshot: It's impossible to put an exact figure on it now, but VW could easily end up paying several billion dollars to compensate investors for losses.

Another potential big bill for VW

The cost of this scandal is already immense.

VW's settlement of civil claims in the U.S. could cost it over $15 billion, much of that going to buy back nearly half a million defective vehicles from owners. It's likely to face criminal charges in the U.S. that could take another $1 billion or more to settle. It's committed to recalling and repairing millions of affected vehicles in Europe, and it faces potential fines, criminal charges, and other costs in markets around the world.

These shareholder suits add additional exposure to VW's already-substantial obligations. The final cost of shareholder litigation may not come close to $9 billion once all is settled -- but then again, it might. VW can afford another big financial hit, but at what cost to its future-product programs?

A year into this scandal, that's just one of many questions that VW has yet to fully answer.