Key information about the company's next iPad-bound processor come to light. 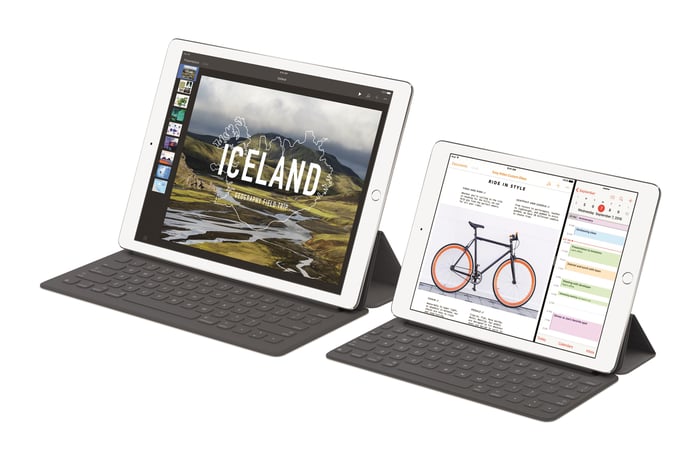 Last year, Apple (AAPL 0.20%) introduced the 12.9-inch iPad Pro. At the heart of this oversized tablet was a chip that the company dubbed the A9X. The A9X was something of a marvel when it made its debut -- it offered crazy performance levels for a relatively thin, light, and fanless tablet. It was also a very large chip manufactured in Taiwan Semiconductor Manufacturing Company's (TSM 2.29%) bleeding-edge 16-nanometer FinFET+.

Now the A9X is "old news" -- the A10 Fusion inside the iPhone 7 and 7 Plus is now in the spotlight, sporting better CPU performance and more transistors than the already very impressive A9X.

Today, I'd like to offer up some interesting tidbits regarding Apple's next-generation iPad processor, which will presumably be called the A10X.

Take a look at this snippet from an Apple chip engineer:

According to this job description, the A10X graphics processor going into the next iPad was completed on time and actually exceeded the company's goals with respect to performance, power, and area. Apple tends to have fairly aggressive targets to begin with, so the fact that Apple's team did better than expected is nothing but good news.

Good stuff, but that's not all.

Notice that the engineer mentioned that the team achieved all of this "while simultaneously adopting new process technology and design tools." In this case, "process technology" refers to the manufacturing technology that Apple will use for the chip.

We know that the A9X is manufactured in 16-nanometer FinFET+. A "new technology" for the A10X, then, would imply that we are looking at a 10-nanometer process from one of the two major contract chip manufacturers -- either TSMC or Samsung.

KGI Securities' Ming-Chi Kuo reported earlier that the A10X would indeed be manufactured solely by TSMC, so that report -- in combination with the aforementioned findings -- should give investors some confidence that the A10X will be built on TSMC's 10-nanometer technology rather than Samsung's.

When will we see this in the market?

My guess is that Apple will take the opportunity to refresh its iPad lineup in the spring of 2017, a year after the company introduced the 9.7-inch iPad Pro. And given that Kuo referred to the next-generation iPad processor as the A10X rather than the A11X means that the new iPads should launch well in advance of the A11-chip-powered iPhone next fall.

What improvements should customers expect?

Apple was able to achieve what it did with the A10 Fusion chip in an area of 125 square millimeters on a variant of TSMC's 16-nanometer technology. The potential move to 10-nanometer should roughly double the number of transistors -- think of these as the base building blocks of a chip -- that the iDevice maker can pack into a given area.

My guess is that Apple will stick with two main processor cores, the same core count that's in the A10 Fusion, but it will use the performance and power benefits of the new manufacturing technology, coupled with the larger transistor budget that the iPad chip teams will have, to pack in a lot more graphics performance.

I also expect that the CPU cores that Apple includes will run at higher frequencies than the ones inside the A10 Fusion.

The A9X was essentially "laptop class" -- and we're not talking budget laptops, either -- and I believe that the A10X will rival what the very best thin, light, and fanless laptops at the time will offer.

With such incredible horsepower available to them, it'll also be interesting to see the kinds of new apps that developers will be able to bring to the iPad.