Seaspan Corporation (NYSE:ATCO) certainly catches the eye of income investors with an exciting yield of 11%. However, investors should not blindly buy into the company just because of its generous yield. Instead, they need to dig deeper into the containership lessor's financials to make sure that its lucrative income stream will not run dry. These charts should help investors gauge the safety of the payout.

The first thing investors should know about Seaspan Corporation is that it is by far the largest containership-leasing company in the world: 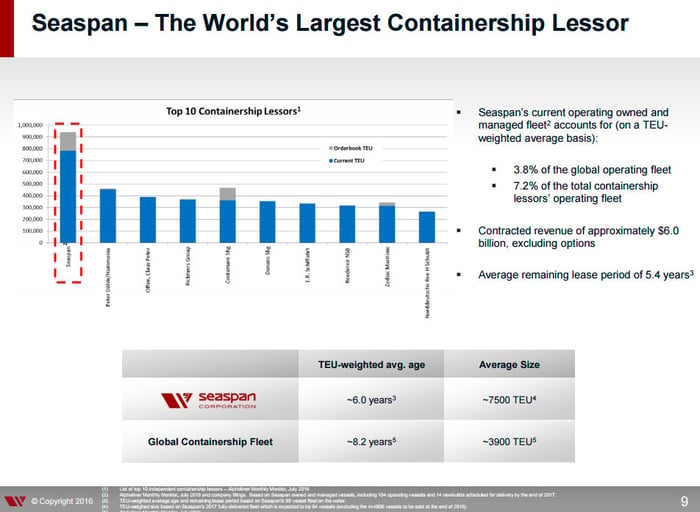 As the chart shows, it has more than twice the TEU (twenty-foot equivalent unit) capacity of its nearest rival. Furthermore, with 89 operating vessels and 115 total containership under management, it has a much-larger fleet than publicly traded containership-leasing competitors Costamare (NYSE: CMRE) and Danaos (NYSE:DAC), which have 72 and 59 vessels, respectively. That larger size and scale provide the company with greater diversification because it has more ships earning revenue than rivals do, which better insulates it from losing a key customer.

Finally, that chart shows that Seaspan Corporation has the most future growth of the group, with more TEUs on order via newbuild vessels than all its peers, including Costamare, which is the only other peer with a large fleet of newbuilds.

Not only does Seaspan Corporation have visible future growth, but it has a history delivering meaningful growth, as these next four charts show: 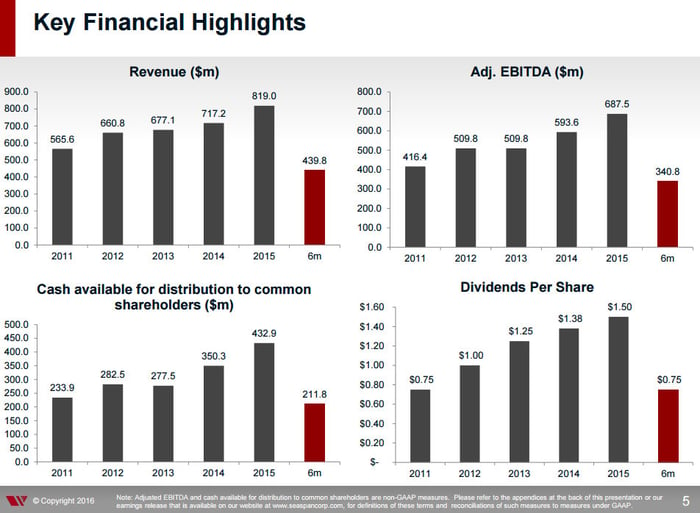 The company has added vessels to its fleet regularly over the past few years, which drove a steady increase in revenue. Earnings and cash flow, likewise, have risen rather consistently. In fact, cash flow available for dividends grew at a faster rate, going from 41% of revenue in 2011 to roughly 50% over the past year, driving dividend growth. In addition, it is worth noting that while the company generated $211.8 million in cash available for dividends, it only paid out about half that amount this year. This implies that the dividend is pretty secure as long as cash flow remains stable and the business does not need the money for other purposes.

As the first slide noted, the majority of Seapsan Corporation's fleet is currently under long-term leases worth $6 billion that have an average length of 5.4 years. Overall, the company has a very balanced maturity profile, with some contracts extending out for decades: 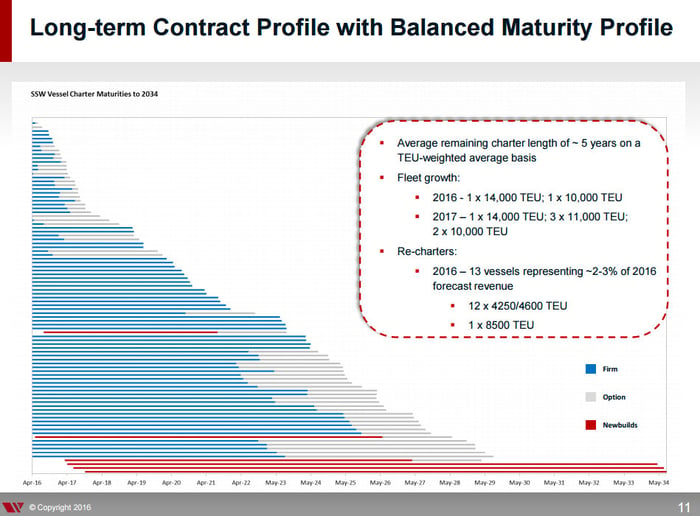 What is important to note about this chart is that the company does not have many near-term contract expirations. Further, those that are expiring this year are smaller vessels, representing just 2% to 3% of revenue. This suggests that the company's revenue should remain relatively stable over the near term, with upside as newbuild vessels enter service and Seaspan recharters expiring vessels to new contracts, potentially at higher rates.

Two things these charts do not tell investors

These six charts all imply one thing: Seaspan Corporation's financials are in pretty solid shape. That said, there is one component that they do not quantify, which is the risk that things do not go according to plan in the future. For example, the charts show that Seaspan Corporation has several newbuild vessels under construction. What they do not tell us is how the company will pay for them. Currently, the company has $570 million in remaining capital expenditure requirements against $410 million in available financing and $349 million in cash on hand, which would imply that it should not have any problem meeting these obligations, all else being equal.

Second, the charts show that the company's cash flow is relatively stable due to long-term contracts, assuming its customers fulfil their end of the bargain. That has become an increasingly critical risk after a key shipper recently filed for bankruptcy. It is a growing concern for rival Danaos because it leased eight of its vessels, worth $560 million of its $2.8 billion backlog, to that shipper. Seaspan Corporation, likewise, leased several vessels to the same customer, though these contracts represent a much-smaller portion of its revenue backlog. Still, Seaspan Corporation CEO Gerry Wang said of the event that "the fallout of Hanjin Shipping is like Lehman Brothers to the financial markets. It's a huge, huge nuclear bomb. It shakes up the supply chain, the cornerstone of globalization."

With a large, growing container fleet leased under long-term contracts, Seaspan Corporation's outsize dividend appears to be secure. That said, investors cannot overlook two critical risks to the payout: the company's ability to fund its newbuild backlog, and the fallout from the bankruptcy of a leading shipper. As long as those two issues do not impact its financials, the company should not have any problems maintaining its lofty payout.