Motorcycle stalwart Harley-Davidson Inc (NYSE:HOG) has been the subject of multiple buyout rumors so far this year, and that's caused its stock price to shoot up sharply multiple times at different points. Even after having given back those gains in the days following those rumors, Harley's shares are up nicely so far in 2016, beating a pretty strong S&P 500 in total returns to date: 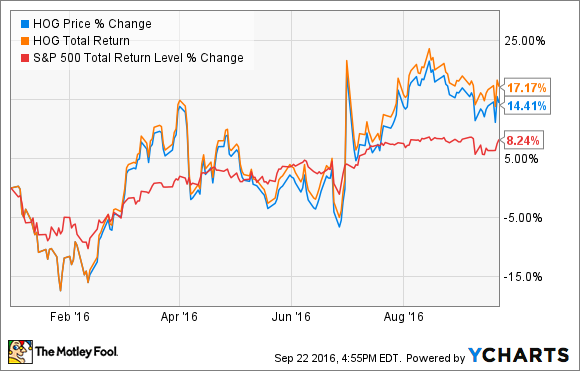 And while plenty of stock traders will tell you to "buy the rumor, sell the news," to do so with Harley-Davidson misses the point: It's a high-quality business, and its shares are relatively cheap today.

The latest rumors and how the "news" would cost you money

On Sept. 21, shares of Harley jumped as much as 7% in midday, following the latest buyout rumors, but by the end of the trading day, the stock had given up about half those gains. It finished up just under 4% following a statement from a Harley spokesperson who dispelled the buyout rumor.

This follows a rumor in late June that the company was going to be taken private, which sent shares up nearly 20% in a single day, only to lose 11% the next trading day when it became apparent the rumors were unfounded. Since peaking on July 1, Harley's shares are down 4%.

In other words, "buying the rumor" and then "selling the news" in both of these situations would have lost the average investor money. However, focusing on the bigger picture and the potential opportunity with Harley could pay off. Keep reading to learn why.

Harley looks cheap today, with this one caveat

Since peaking in 2014, Harley-Davidson's share price has fallen steadily (before rebounding some this year) as its earnings have flattened. The motorcycle business has grown more competitive in recent years, squeezing Harley's revenue and more recently its margins. Combine a more competitive market with fear that a weak global economy would put pressure on Harley's ability to expand sales outside North America, and investors have largely stayed away from Harley for a couple of years.

And that's created what could be a great opportunity to buy Harley at a pretty cheap valuation, at least based on its historical price to earnings ratio multiple: 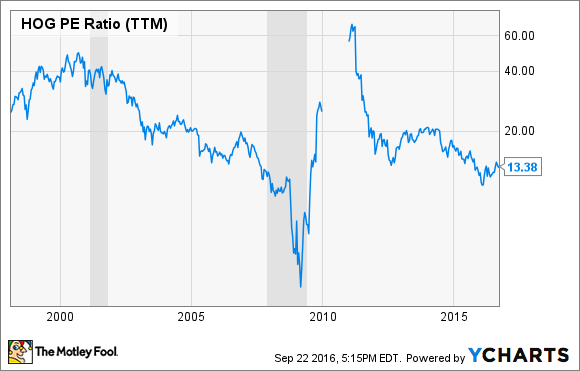 As you can see, Harley shares have typically traded for a higher valuation than they can be bought for today, with the notable exception of the Great Recession, when there was real concern that the company would have trouble remaining solvent.

Which brings us to the one big caveat: Consumer credit exposure.

Harley counts pretty heavily on its in-house finance business to sell motorcycles. And while that's not a bad thing necessarily, it's certainly a risk -- one that could be compounded during an economic recession. If people have to choose between making the house payment or the motorcycle payment, it's pretty easy to know what most people will do. Add in that a growing percentage of its loans are to sub-prime lenders, and investors shouldn't ignore this out of hand.

With many people concerned over the state of the American economy -- that is to say, good but far from great -- and the jobs market, there's a real risk that what is a luxury item for most buyers could get pushed onto the back burner. There's some evidence this is happening, with motorcycle sales being anything but brisk in recent quarters.

It's a long road ahead

Bottom line, there could be some short-term weakness in motorcycle sales, and competition is certainly fierce. But Harley isn't standing still and has significantly increased its marketing spending to help counter some of this pressure. Low interest rates could help prop up sales while the economy trudges along. Furthermore, by most metrics the economy is relatively strong, if not growing at a fast clip. Recent median income data and a strong housing market show that there is some fundamental strength.

So while betting on rumors and timing is at best a coin-flip, buying Harley-Davidson shares while they are trading below the company's historical valuation range -- and holding them through the current uncertainty and weakness -- is a far more likely way to profit.

It could take time to work out, and the share price could fall before it goes up. But over time, it usually works out to buy into a solid company with strong competitive advantages (like being one of the most recognized brands in the world) when its stock is on sale. Just don't ignore the risks if the economy weakens, and invest according to your comfort with that risk.