Changing up its massive loyalty program was one of the reasons Starbucks' comp sales dropped in Q3. The stock is down since, which has created an entry point for this long-term growth story.

Starbucks (SBUX 1.62%) announced an update to its loyalty program and mobile app in April that moved from a per-visit reward system to an amount-spent system. Critics took to social media in the weeks after the new program to complain, but most analysts agreed that the long-term impact of the change would be flat to positive. However, when fiscal year Q3 earnings came in with lower-than-expected comparable sales, the loyalty program change was partially blamed.

Starbucks' mobile app has long been deemed one of the reasons Starbucks has been so successful in the last decade thanks to improvements like maps to find Starbucks locations, partnerships with companies like Spotify to have a better in-app experience, and pre-pay mobile ordering for quicker service. Starbucks' loyalty program grew 18% year over year in the most recent quarter, to 12.3 million active members. Starbucks' mobile app now accounts for around a quarter of all Starbucks transactions, and consumers had about $1.5 billion stored on their member cards as of the quarterly filing.

Starbucks' loyalty program used to give customers one "star" for each transaction, regardless of how much money was spent during that transaction, and after 12 stars, the member could get a free item. The updated version moves to an amount-spent system, giving two stars for every dollar spent, now needing 125 stars to get a free item. Understandably, there was some instant backlash from the low-spend consumers who now need to make more purchases to get their reward.

However, for most people who order more than just a single plain coffee, the difference ranges from minuscule to actually meaning more rewards than before. This new system will not only reward those customers who spend more, it also has the added benefits of making lines in stores shorter (as people before were breaking orders into separate transactions to try and get more stars) as well as making it easier for Starbucks to run promotions such as "double star days."

While some have called the loyalty program change a "misstep," the long-term benefits are clear and are likely to lead to increased sales and margins over time as it focuses on higher-worth customers, speeds up lines in stores, and allows for greater flexibility with promotions. The move has likely shed a few of Starbucks' lower-value customers this year, but long term, it should lead to gains overall.

How this "misstep" creates a buying opportunity

During the earnings call, CEO Howard Schultz said the new loyalty program was partially to blame for the drop in comp sales, not because of customers leaving Starbucks over the change, but because of the timing of promoting the new loyalty program at the same as a summer Frappuccino promotion. Because the summer Frappuccino program was such a strong performer in the past, the timing hurt this year's comp sales. This short-term misstep is likely to be corrected with future sales comp growth.

This creates a buying opportunity because Starbuck's stock is down about 12% since the launch of the new loyalty program in April, even though for Q3, Starbucks reported a 7% rise in total revenue and a 24% rise in earnings per share. While the market is worried about the efficacy of the new loyalty program, and Starbucks' overall growth potential, the early signs of success of the new program show a good chance for renewed comp growth above expectations in Q4 and full-year 2016, and more growth going forward. 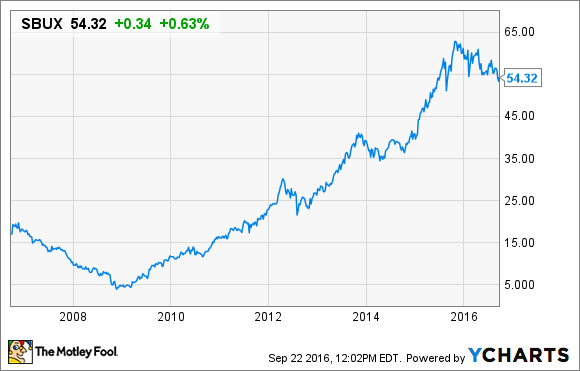 The stock still isn't necessarily cheap, at around 30 times earnings, but the lull the stock has been in after Q3 earnings and the loyalty program issues could make for an attractive entry point if comp sales start to tick back upward in the coming quarters. Longbow Research agrees and rated Starbucks stock a buy on Sept. 21 with a price estimate of $71, a potential 30% upside.

Seth McNew has no position in any stocks mentioned. The Motley Fool owns shares of and recommends Starbucks. We Fools may not all hold the same opinions, but we all believe that considering a diverse range of insights makes us better investors. The Motley Fool has a disclosure policy.