Disney's ESPN has a huge ratings lead, but Fox Sports 1 is closing the subscriber gap. 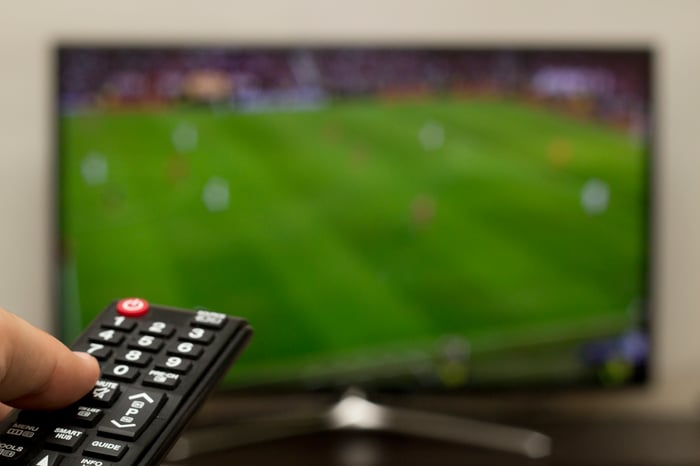 Disney's (DIS 0.43%) ESPN is still the biggest brand in sports and the most valuable television network in the world, but the channel has lost more than 10 million subscribers since its 2011 peak, and competitive initiatives from Twenty-First Century Fox (FOX) (FOXA) could solidify into a credible long-term threat even as the challenger network's ratings are still far behind the established sports leader.

The most recent Nielsen subscriber tracking shows Fox's sports network making substantial headway in closing the subscriber gap, and a future in which OTT options look to gain increasing traction could be a benefit to FS1, which has substantially lower carrier fees than ESPN. What does the future playing field look like in the battle of the sports networks?

A recent change in Nielsen's methodology resulted in a 1.5% increase to all subscriber numbers, elevating ESPN's projected subscriber base by 1.2% in September over August. However, the most interesting data involved the gap between Disney's sports channel and FS1. ESPN had a roughly 6.1 million subscriber lead in August, but September's numbers suggest that this narrowed to 3.9 million homes -- a 36% decline in the subscriber gap.

It's unclear what triggered Fox's subscriber gains, but the trend of FS1 narrowing the subscriber gap is evident. Looking at a longer timeline, Nielsen's February 2015 data showed that ESPN was in roughly 9.6 million more homes than FS1.

Nielsen's numbers do not take OTT subscriptions into account. The dramatically lower affiliate fees for Fox's sports networks (somewhere around $1.15 for FS1 and $7.21 for ESPN, based on estimates from SNL Kagan) could help further narrow the lead, or even give FS1 a subscriber edge as TV shifts to a more a la carte distribution model.

Dish Network's Sling TV is rolling out a separate version of its $20 base-level package that features Fox channels instead of Disney's ABC and ESPN channels, with the package offering more total channels, more NFL game coverage, and introducing multi-device streaming at the price point. Dish's Fox package doesn't give any clear indication that the OTT trend will help FS1's subscriber situation relative to ESPN, but it does point to increasing options for consumers, and the fact that FS1 has lower costs and less value to protect creates the opportunity to be more nimble in bundling. However, erasing the subscriber gap still leaves Fox with the need to improve ratings.

ESPN is still crushing FS1 in ratings, but it's more threatened by changes in TV

While ESPN's subscriber lead is eroding, FS1 still posts low ratings compared to its leading competitor. FS1 won't approach ESPN in total ratings in the foreseeable future, as the larger sports network has a more powerful brand as well as live broadcast rights to NFL and NBA games. But the Fox Sports family of channels has a long-term opportunity to grow through the combined offering of its national-oriented commentary coverage on FS1, FS2, and its regional sports networks. The latter cater to fans of local teams and offer less live coverage, but they carry lower operational expenses than ESPN.

If a la carte television takes off, the cost of subscribing to the core Fox channel, a regional sports networks, and an FS1 subscription for dedicated national sports and commentary would still come in substantially below the cost of an ESPN subscription. ESPN and ESPN2 are currently bundled with base-level packages from Sling TV at $20 per month, and Sony's PlayStation Vue at $30 per month, but Disney has a deal in place that enables it to pull out of Sling if its subscriber base (currently around 600,000) exceeds 2 million, and it likely has a similar arrangement with PlayStation Vue. This contractual setup, as well as an estimate that a la carte ESPN could cost as much as $36 monthly if Disney was to keep revenue constant, helps illustrate why Fox could be better positioned for changes in the TV landscape.

What is Fox doing to compete with ESPN?

As part of a strategy to bolster FS1's popularity, Fox has hired key management and broadcast personnel away from ESPN, and looks to be hunkering down for sustained competition with the biggest broadcast brand in sports. The recent strategy shift kicked off with the hiring of former ESPN programming executive Jamie Horowitz to head up Fox Sports National Networks. The company then hired broadcast personality Skip Bayless away from ESPN's First Take, and is reportedly paying the sports anchor roughly $5.5 million a year to host its Skip and Shannon: Undisputed program. Fox also wooed former ESPN broadcaster Colin Cowherd to its network.

Early indicators for Horowitz's talent-focused strategy have been less than stellar, with ratings for Undisputed and The Herd with Colin Cowherd coming in far below those for comparable ESPN programs. The lack of immediate and explosive success for its commentary programs suggests a need to continue building the network brand gradually and the importance of tailoring content to connect with modern audiences. FS1 still is a big underdog roughly three years after its debut, but a changing TV distribution landscape could give Fox an opportunity to gain ground if it remains committed to improving content on the network .

Keith Noonan has no position in any stocks mentioned. The Motley Fool owns shares of and recommends Walt Disney. We Fools may not all hold the same opinions, but we all believe that considering a diverse range of insights makes us better investors. The Motley Fool has a disclosure policy.