Brian Feroldi, Sean Williams, and Matthew DiLallo
(TMFTypeoh)
Author Bio
Brian Feroldi has been covering the healthcare and technology industries for The Motley Fool since 2015. Brian's investing strategy is to buy high-quality companies and then let compounding work its magic. See all of his articles here. Follow @brianferoldi
Follow @brianferoldi

We Fools believe that the markets are largely efficient, but Wall Street can become overly bearish on a company's stock because of short-term problems. When that happens, investors who take a long-term view are presented with a great buying opportunity

With that in mind, here's a list of three stocks that our team of contributors believe Wall Street has unfairly punished.

The downdraft of downgrades

Matt DiLallo: Oil giant Occidental Petroleum (NYSE:OXY) doesn't get much love from Wall Street. For evidence, we only need to look at the string of downgrades it received since the start of the year:

As of the end of last quarter, Occidental Petroleum had $3.8 billion of cash on its balance sheet. For perspective, that's enough money to fund its $3 billion capex budget with room to spare. One reason it has that cash cushion is due to its relatively stable underlying asset base, which consists of cash-flowing enhanced oil recovery projects in the Permian Basin, steady production from its Al Hosn Gas Project in the United Arab Emirates, stable midstream operations, and a counter-cyclical chemicals business.

Further, unlike a lot of oil companies, Occidental Petroleum is growing its production this year, with a projection to increase output by 4% to 6%. Moreover, thanks to its oil-rich acreage in the Permian Basin, the company sees that growth rate accelerating to 5% to 8% annually in the future, driven primarily by higher-margin oil production.

Brian Feroldi: The shipping industry is going through a bit of a rough patch these days, which has caused Wall Street to turn bearish on the entire sector. In turn, shares of Seaspan (NYSE:ATCO) -- arguably the strongest company in the space -- have taken a beating.

Seaspan makes its money by buying container ships and then leasing them out to major liners under long-term charters. Those contracts provide Seaspan with highly predictable revenue and cash flow, which helps it stay afloat when times are tough. 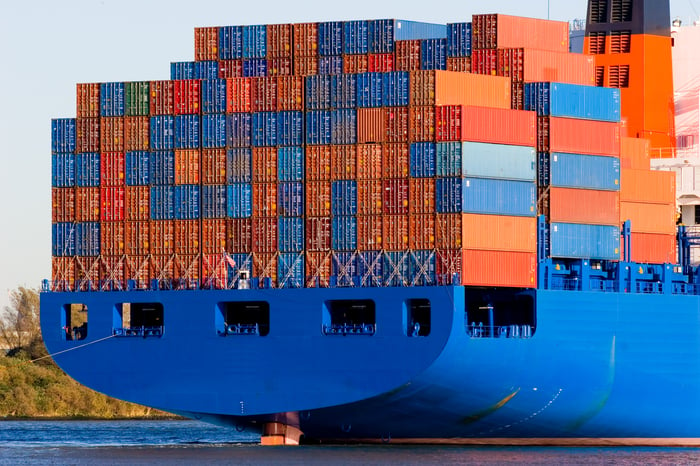 However, liner operators are struggling because so many new boats have come online over the past few years that demand hasn't been able to keep up. That's caused shipping rates to plunge, which is putting the hurt on Seaspan's customers.

Things are so bad at Hanjin Shipping -- a major shipping company and customer of Seaspan -- that it has asked Seaspan to renegotiate its long-term contracts. Seaspan held out as long as it could, but it was recently forced to cave.

While that's troubling, investors need to remember that Hanjin represents only about 5% of Seaspan's revenue. Plus, even in this rough operating environment, Seaspan continues to grow its revenue and profits, and it's having no trouble raising capital or paying out its dividend. That speaks to the strength of its business model.

Seaspan is far from a risk-free investment, but I think Wall Street is currently pricing in an endless stream of bad news. While the next year or two will probably be rough, in time I think the business will thrive and the stock price will take care of itself.

Doubters can bank on this

Sean Williams: Despite having a price target that's currently 4% lower than where it's trading today, and an average analyst rating of 3.2 (implying something between hold and underperform), my belief is that Bank of Hawaii (NYSE:BOH) is getting a bad rap.

The obvious knock against Bank of Hawaii, and the entire banking sector for that matter, are historically low lending rates precipitated by the Federal Reserve's dovish monetary policy. Until we see substantial increases in the federal funds target, it'll be tough for banks to generate significant growth in their net interest margin.

This concern aside, Bank of Hawaii has a number of factors that make it quite attractive. For starters, as a regional bank operating in Hawaii, it's located in an environment that's a hot spot for tourists and travel. Furthermore, based on July 2016 data from the Bureau of Labor Statistics, Hawaii has the sixth-lowest seasonally adjusted unemployment rate in the country at 3.5%. With a healthy economy, Bank of Hawaii is probably less likely to see loan defaults from consumers or businesses than most regional banks.

More important, though, is Bank of Hawaii's impressive track record. Instead of getting caught up in the same aggressive banking tactics that crippled money center banks during the Great Recession, Bank of Hawaii has stuck to the bread-and-butter banking strategy of boosting deposits and making high-quality loans. During the second quarter, Bank of Hawaii increased its loan and lease balances by 3.3% to $8.3 billion while growing deposits 1.1% to $13.6 billion. Of note, Bank of Hawaii's non-performing assets totaled just $16.3 million compared to $8.33 billion in loans, and its coverage ratio (to cover nonperforming loans) is higher than 170%.

Given its healthy return on assets of 1.1% (typically anything above 1% is good for a bank) and its 2.7% yield, Bank of Hawaii deserves more credit from Wall Street.