Please ensure Javascript is enabled for purposes of website accessibility
Log In Help Join The Motley Fool
Free Article Join Over 1 Million Premium Members And Get More In-Depth Stock Guidance and Research
By Maurie Backman – Sep 26, 2016 at 6:01AM

Hint: It's probably higher than you think.

Many Americans rely on credit cards for purchasing power in the absence of cash on hand. But there's a difference between using credit cards wisely, and using them as an excuse to charge away the things you can't afford. Unfortunately, Americans across all ages and income levels have a tendency to fall into the latter trap. According to recent data from ValuePenguin, the average U.S. household holds $5,700 in credit card debt, and more than 38% of households are currently carrying balances of some sort. The problem is that holding onto credit card debt is an almost-guaranteed way to lose money for no good reason, and unless we change our bad habits, a lot of us are headed for financial trouble. 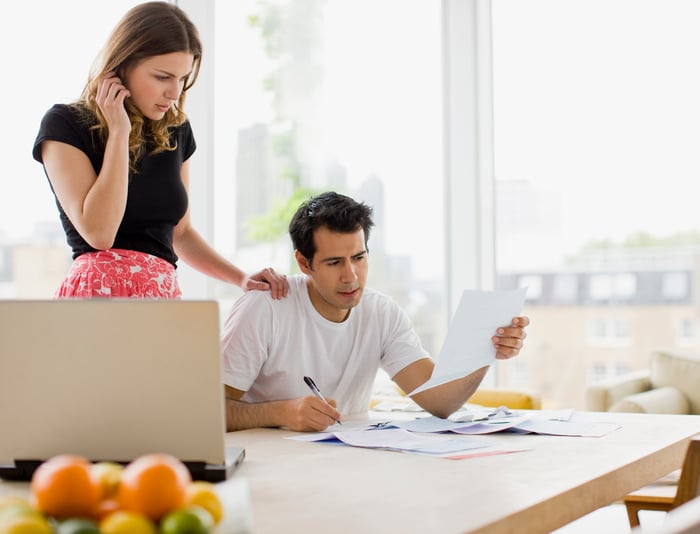 Who's charging too much?

You'd think millennials would be the most guilty of credit card abuse, but actually, younger Americans, coupled with those 75 and older, hold the least amount of debt. The following table shows how much credit card debt the average American carries by age group:

Why do middle-aged Americans carry so much debt? College costs could be a factor. With tuition prices perpetually on the rise, many parents stretch themselves financially to send their kids to fancy schools. The numbers for seniors are also pretty sobering considering the importance of entering retirement debt-free. Americans 65 and older hold an average of $6,351 in credit card debt.

It's not just low-income households that abuse their credit cards. Households earning $160,000 or more have $11,200 in credit card debt, on average. That's a lot of needless interest to pay.

Here's what that debt can cost you

Just how much wasted money are we talking about? Since 2005, the average credit card interest rate has fluctuated between 12% and 16%. If we take the current average credit card balance among U.S. households -- $5,700 -- and apply a 14% interest rate, that's over $440 a year gone out the window. Worse yet, if you rack up a $5,700 balance on your credit card, and it takes you three years to pay it off at 14% interest, by the time you're done, you'll have pointlessly parted with more than $1,300.

Carrying credit card debt is sort of like throwing yourself into a seemingly endless cycle of hopelessness. For every day you can't pay off your debt, you make your situation even worse. Over time, this can take a serious toll not just financially, but emotionally, too.

If you're serious about breaking the cycle, the first thing to do is commit to paying down that debt, no matter what it takes. A big part of getting out of credit card debt is believing you can actually do it. Next, make a list of your various debts, and start paying them off in order of highest interest rate to lowest. Some financial experts might advise tackling your smallest individual balance first, but while wiping out a particular debt in its entirety might feel good from a mental perspective, financially speaking, it makes much more sense to first pay down the debts that are costing you the most.

You could also try transferring your balances from credit cards with high interest rates to those with lower rates. While moving a balance from one card to another won't make it go away, reducing the interest component can save you a fair amount of money as you chip away at that principal.

Finally, you might consider cutting back on luxuries or seeking out an extra source of income to generate more cash to apply to your debt load. Eliminating two restaurant meals a month, for instance, might put $600 back in your pocket over the course of a year. Similarly, if you find a side job that pays you $300 a month, you'll have an extra $3,600 at the end of the year to apply to your balance. Don't have the time or energy to work an extra gig? Try selling the stuff you already own but don't actually need, and use the proceeds to pay off debt. No matter what strategies you employ to eliminate credit card debt, the sooner you take action, the less money you'll end up throwing away in the long run.