They may not be exciting, but these stocks won't keep you up at night.

The safest stocks are those that are least likely to produce permanent losses in the long run. While many investors get caught up in the euphoria of chasing the next big thing, those who stick to safe stocks bought at reasonable prices can make big money over the span of decades without all the drama. We asked five of our contributors to make their case for a safe stock to buy today. Here's what they had to say.

Tim Green: There are two things that must be true for a stock to be truly safe. First, the company must have a rock-solid business model with competitive advantages that minimize the risk that it will be disrupted. Second, the share price must be reasonable. Paying dozens of times trailing earnings for even the best company isn't a particularly safe thing to do.

The Walt Disney Company (DIS -3.79%), founded nearly a century ago, checks both boxes. Disney owns ABC and ESPN, operates a highly successful movie business with franchises includeing Marvel and Star Wars, runs amusement parks and resorts around the world, and generates billions of dollars of revenue from consumer products each year. Disney is posting strong growth: It increased its total revenue by 9% year over year during the latest quarter. Over the past 12 months, Disney generated $56 billion in revenue.

Disney is also wildly profitable: It managed an operating margin in excess of 25% in fiscal 2015. Analysts expect the company to produce adjusted earnings of $5.79 per share this year, putting the P/E ratio at about 16. Disney isn't the cheapest stock in the world, but it's hard to argue that it's not a safe pick.

Sean Williams: Though no stock is a sure thing, one of the safest stocks long-term investors have to choose from right now is electric utility powerhouse NextEra Energy (NEE 0.04%).

NextEra Energy's attractiveness essentially boils down to two factors. First, a critical aspect of NextEra's success has been its focus on alternative-energy projects. Understand that while most electric utilities have begun to address the need for non-fossil-fuel electricity generation, NextEra has been commissioning these projects proactively for years. In fact, NextEra Energy is the world's largest generator of renewable energy from the wind and sun. Though these projects may seem costly now, NextEra's long-term costs should actually be lower than many of its peers' because it has taken these proactive steps to reduce its reliance on fossil fuels.

NextEra's recent acquisition is another reason to feel confident about its future. In July NextEra Energy outbid its rivals for the rights to purchase Oncor for $18.4 billion. Oncor is the now-bankrupt TXU Corp.'s regulated electric utility business. It has generated steady and predictable growth for quite some time. The deal thrusts NextEra into a large market (Texas), and it will substantially boost the company's revenue tied to regulated businesses. While regulated electric businesses require approval to raise rates, they typically generate very predictable cash flow with little to no exposure to wholesale markets.

As icing on the cake, NextEra Energy is also paying out a superior 2.9% dividend yield, and its payout has essentially doubled since 2008. There's a lot for the risk-averse investor to like here.

Todd Campbell: Safety is relative, but investors who like to buy low and pocket dividends in the process might want to cozy up to Gilead Sciences (GILD -0.02%).

Gilead Sciences shares have tumbled 50% from their peak on concern that competition is cutting into the company's dominance in treating hepatitis C. Unquestionably, new hepatitis C drugs are impacting prices and causing sales growth to flatline, but investors shouldn't be shortsighted on this one.

This summer, the company won FDA approval for its latest hepatitis C drug, Epclusa, and positioning that drug as the go-to treatment for genotype 2 and 3 patients may shore up sales in the indication by year-end.

Gilead Sciences is also in the midst of a refresh of its HIV drug lineup that propelled HIV drug sales more than 15% higher in the first half of this year. Efforts to expand into treating autoimmune disease and to develop a drug for nonalcoholic steatohepatitis, an increasingly common cause of liver failure, could pay off down the road as well.

Overall, Gilead Sciences is undeniably facing headwinds, but it boasts one of biotech's best balance sheets, and its shares are yielding a competitive 2.3%, so I think it's one of the best bargains in biotech right now.

A high-potential growth-and-dividend stock for you

Neha Chamaria: A "safe" stock should ideally be one that offers you value in terms of both growth and dividends. One stock that fits the bill is 3M (MMM -0.04%).

3M has displayed solid earnings power over the years and should continue to do so thanks to a diverse product portfolio that serves nearly every major industry, including consumer goods, healthcare, automotive, manufacturing, electronics, oil and gas, and aerospace. This chart illustrates 3M's substantial growth in the past decade. 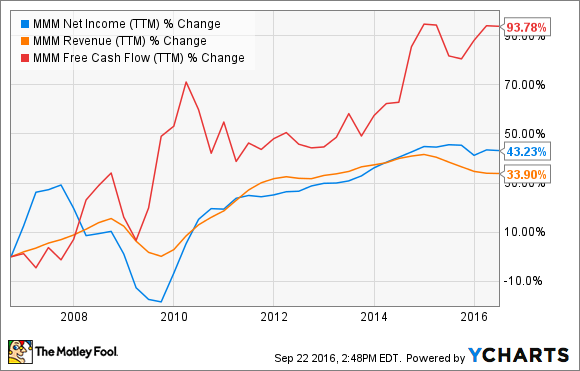 What's more, 3M expects to grow just as strongly in coming years. Management is eyeing 8%-11% growth in earnings and 100% "free cash flow conversion" through 2020, which should also bring in rich rewards for shareholders. The company has paid a dividend for 100 years now and has raised its dividend for 58 consecutive years. That includes periods of severe economic turbulence, including the global financial crisis, which is proof of 3M's solid financial standing and responsible management. Given the strong growth potential of 3M's earnings and FCF, along with its moderate current payout ratio of about 50%, there's no reason the conglomerate shouldn't be able to increase its dividends further in the years to come.

So whether you're looking for a growth stock or a dividend stock, 3M offers you the best of both worlds today.

You'll wanna quack about this stock

Dan Caplinger: One thing everyone needs is protection against the threat of unexpected healthcare expenses, and Aflac (AFL 0.07%) has made it its business to meet its customers' needs on two continents. The company, known best in the U.S. for its spokesduck, offers supplemental insurance products domestically, including coverage that's tailored to offer benefits related to specific diseases and medical conditions, as well as unpredictable events like accidents. Yet what many don't know is that Aflac has larger exposure to the Japanese insurance market, where it offers an even wider range of products.

Aflac has a number of factors that make it a safe stock. First, its valuation is fairly inexpensive right now: The stock trades at just 12 times its trailing earnings. Moreover, after years of U.S. dollar strength that has hurt the financial performance of the insurer's Japanese business, the Japanese yen has started to climb, and that should give Aflac a near-term bump to its earnings. Perhaps most importantly, Aflac has demonstrated its commitment to shareholders through generous dividends, and for 33 straight years, the insurer has boosted its quarterly payouts each and every year. With a 2.2% dividend yield and solid prospects for business growth in both of its key markets, Aflac is about as safe a stock as you'll find in today's market.

Forget Dogecoin, These Stocks Are Better Buys During a Market Crash
366%