Despite shares that are riding high, it might not be too late for investors to make a purchase.

Dick's Sporting Goods (DKS 3.22%) stock has had a great year, especially since the January lows of about $35 a share. With prices up roughly 70% since then, investors may be wondering if it is too late to buy. Since a major competitor -- Sports Authority -- is now defunct and U.S. consumers are spending more money on sports gear and apparel, it may not be. 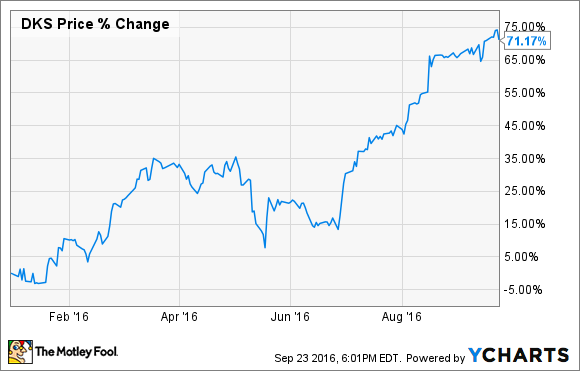 Dick's has had two major tailwinds propelling business forward in 2016: Competitors are struggling and closing stores and U.S. consumers are increasing spending on sporting goods.

Sports Authority's plan was to emerge from bankruptcy in a stronger financial position. Soon after seeking bankruptcy protection, though, the company was hacked up and auctioned off, with a group of liquidators winning the bid for inventory. A fire sale ensued, leaving landlords and other debtholders looking for relief. In late June, Dick's staked claim to the Sports Authority business name; intellectual property, including the website, loyalty program, and customer files and email lists; and 31 store leases.

Dick's scooped up the Sports Authority name and intellectual property for just $15 million. The company beat out British competitor Sports Direct International, which had submitted a bid for $13 million. Dick's assumed the 31 store leases for an additional $8 million. So Dick's lost a competitor and gained what should be valuable parts of that competitor.

Another major development this year has been increased consumer spending on sports gear. Through August, the U.S. Census Bureau reported that spending at sporting goods, hobby, book & music stores was up 5.5% from the first eight months of 2015, notching $58 billion in sales.

Fewer competitors and more spending is good news for Dick's. The company was already the largest chain specific to athletics, and these developments stand to boosts its status.

During the last quarterly earnings report in August, Dick's reported that Q2 sales increased 7.9% to approximately $1.97 billion compared with last year. Same-store sales, including the company's website, increased 2.8% year over year. There were 649 locations in operation during the quarter.

Company management is not content with its current leadership position in the industry. The plan is to continue expanding with more stores. Through the fall, the plan is that 25 new Dick's Sporting Goods locations will be opened, and the final count of new locations for the year will be 36.

Also on the docket is the opening of seven Field and Stream stores and two Golf Galaxy stores, most of which will be adjacent to existing Dick's Sporting Goods locations. By the end of 2016, the company will be nearing the 700 mark for total number of storefronts.

The company also continues to push its online presence. Online sales increased 26% last quarter compared with a year ago and made up 8.5% of total sales. The acquisition of Sports Authority's online assets will become part of the strategy in growing those sales further, and the company has been using physical locations to leverage online with its "order online, pickup in-store" initiative.

Is it too late to pick up Dick's Sporting Goods?

After a knockout performance this year, it looks like buying shares for the long run would still be a reasonable bet as the company has done much to strengthen its position as the leader in sporting goods-specific sales.

However, after all of the good news of the past few months, the stock has climbed unabated and at this point is hardly a bottom-of-the-barrel bargain, carrying a price-to-earnings ratio of 21.2. I would be surprised if the stock repeated the run it just had again in the next six months, as some of its future growth is now baked in to share prices.

That being said, the future looks bright for the undisputed champion of sports merchandising. The company has a game plan for continued growth, fewer obstacles before it than at the onset of the year, and strong sales growth momentum. I don't think it's too late to buy in for the long run.