Starbucks stock might be selling for a discount after market concerns have pushed the stock lower. Here are three reasons why its long term prospects still look strong.

In the most recent quarter, Starbucks (SBUX 0.03%) reported 4% comparable sales growth. It was the first time in 25 consecutive quarters that Starbucks' comparable-store sales growth was below 5% year over year. Even though Starbucks reported a 7% rise in total revenue and a 24% rise in earnings per share year over year, its stock took a hit as analysts and investors began questioning if this was the start of slower growth.

Starbucks stock has been one of the best performing in the S&P 500 for the last five years, up 175% during that time. However, the stock has fallen over the last six months on slower growth concerns, and this dip could be a great time to buy into this well-performing company. 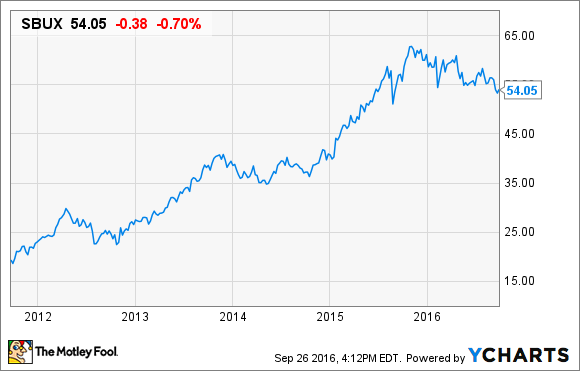 Concerns about comparable growth slowing are legitimate, but those concerns -- and the 8% decrease in Starbucks stock price in the last few months as a result -- have put the stock on sale for long-term investors. Here are three areas Starbucks is making the right moves to keep its growth rate solid for years to come.

Starbucks updated its loyalty program in April, moving from a per-visit reward system to an amount-spent system. Some customers complained that the new system only rewards those customers who spend more money, but it prevents people from breaking orders into separate transactions to try and get more stars, a problem that was causing longer wait times in stores.

Starbucks loyalty program has over 12.3 million active users in the U.S. and Canada as of the most recent quarter, up 18% in the quarter year over year. Starbucks cards now hold more than $1.5 billion in pre-paid funds.

We are already seeing the percentage of tender from Starbucks Rewards U.S. customers rise to 33% in Q3, up three full points from last year, continuing an established pattern in which revenue growth from Rewards customers typically outpaces revenue growth from non-Rewards customers. And we are seeing both incrementality of spend and increase in total profit per customer, both directly attributable to a customer's having joined the Rewards program.

China has long been one of the most important growth markets for Starbucks. Starbucks currently operates or licenses over 24,000 stores around the world, a little less than half of which are in the United States. Schultz believes that one day China could take the lead as having the most Starbucks of any country.

That's a tall order, as there are currently about five times as many Starbucks in the U.S. as in China, but the store growth rate in China is far faster. Starbucks has nearly 2,300 stores in China and is opening about one new store per day, on average. During the call, Schultz said the company is targeting 3,400 stores in China by 2019. China's existing stores are also some of Starbucks best performing with comparable store sales there rising 7% year over year in the quarter, compared to 4% in the Americas.

China has more than 10 million Starbucks loyalty members in China, and the company just launched mobile pay in China this year. Starbucks also recently launched its Teavana brand (which Starbucks acquired in 2012) across China to tap what is estimated to be a $9.5 billion market there, 10 times what the coffee market is in China.

Along with sales and earnings in the coming years, Starbucks' dividend is likely to continue growing. Since its first payout in 2010, Starbucks dividend has grown steadily, and now offers a 1.5% yield. Starbucks yield isn't large enough yet to make it a true income play, but the consistency of raising it each year is suggesting that it will become one. 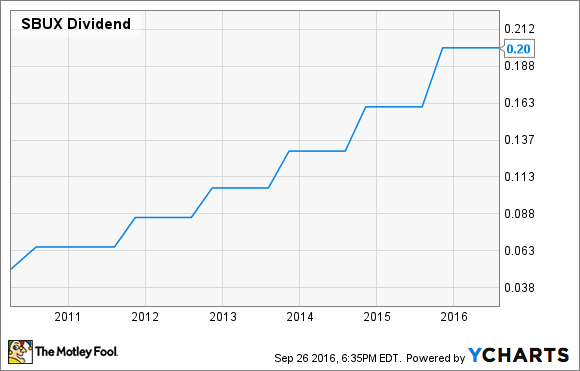 Starbucks licenses 48% of its stores worldwide, and those stores' comparable sales are not calculated into the 4% above. Also, Starbucks is increasing its focus on licensing and selling products outside of stores, such as coffee in grocery stores -- that also doesn't help that comp sales figure. Therefore the impressive total sales and earnings growth is a far better indicator of success than same store growth.

Trading at around 30 times earnings, Starbucks stock is still more expensive than its slower growth competitors like McDonald's (MCD -0.47%) at just 22 times earnings, even after the recent price drop. Still, the anxious market sentiment that has pushed Starbucks stock lower after Q3 earnings could make for an attractive entry point if Starbucks' comparable sales start to tick back upward in the coming quarters. With growth areas like those above, that renewed growth scenario seems likely.

Seth McNew has no position in any stocks mentioned. The Motley Fool owns shares of and recommends Starbucks. We Fools may not all hold the same opinions, but we all believe that considering a diverse range of insights makes us better investors. The Motley Fool has a disclosure policy.