ENSCO, Noble Corporation, Transocean, and Nabors Industries shares are up on news that OPEC has reached agreement to cap oil output. Here's a closer look at what that actually means for these four companies. 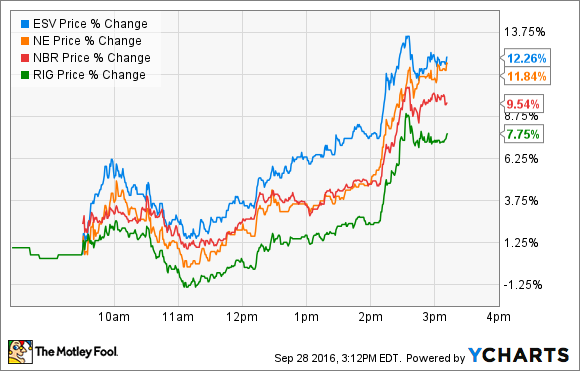 In short, big news is driving this move. Multiple media sources are reporting that OPEC, which controls nearly one-third of global oil output, has agreed to limit its oil output to 32.5 million barrels per day. And while output caps are nothing new for OPEC, this one is particularly compelling, since it represents a nearly 1-million-barrel reduction from OPEC's current daily output.

At this writing, oil prices are up big on this news. Futures prices for Brent crude, the benchmark for much of the world's oil, is up nearly 6% to $48.64 per barrel, while West Texas Intermediate, a common U.S. benchmark, is up 5.4% to just over $47. For proper context, a 5% move for oil prices in a single day is incredibly rare.

For ENSCO, Noble, Transocean, and Nabors Industries, it's probably too early to tell just how good this news may be. After all, they make a living drilling oil and gas wells, and a production cap for one-third of the world's production isn't conducive to more opportunities for these companies.

But at the same time, there's a bigger picture to consider: This move by OPEC is all about driving oil prices higher, and low oil prices have been the key reason why offshore drillers ENSCO, Transocean, and Noble (along with essentially all of their offshore peers) have struggled over the past couple of years, and why demand for new offshore drilling work has essentially dried up. There's also a potential benefit for Nabors, which operates the world's biggest onshore drilling fleet: Higher oil prices could increase drilling activity, particularly in shale oil formations, which are typically more expensive to produce.

But here's the bottom line: If OPEC's rumored output cuts do materialize, it's going to take several months for its plan to be finalized, and then more months before the cuts start to affect global oil supplies. That makes much of today's jump purely based on speculation about the implications. So before acting on this early-stage rumor, it's probably better to let things play out and then invest based on the reality once this plan is actually underway.

After all, non-OPEC producers around the world could seize this as an opportunity to ramp up their output, leaving the world in the same current too-much-oil, not-enough-demand-growth environment. This early news has promise, but it's just too early to know whether it will really be good for these companies.