Self-driving cars are a big part of Ford's vision of its future. But so is its financing arm -- for reasons that are closely related. Image source: Ford Motor Company.

Executives at Ford Motor Company (NYSE:F) recently unveiled their vision and strategy for the Blue Oval's future -- and it's a big change.

The gist of the strategy is that Ford will expand its business to include a series of "mobility" opportunities enabled by emerging technologies like electrification and autonomous-driving systems. But Ford isn't going to neglect its core business of building cars and trucks. It's going to focus on what CEO Mark Fields called four "profit pillars," current products and businesses that are strongly profitable and in which Ford has a dominant market position. If it all goes well, the result will be a bigger and more profitable Ford that thrives rather than being "disrupted" by the self-driving future.

Most Ford investors will know right away that trucks and SUVs are two of those profit pillars. As Fields explained, performance vehicles are also important because of their high profit margins and the ways in which they build the Ford brand.

But Ford also sees its financial-services arm and its parts-and-service unit together as a profit pillar. That's less exciting than a new truck or the latest hot Mustang, but as Fields explained, these businesses are important cornerstones for Ford's future as well as its present.

Ford Credit, the Blue Oval's in-house bank, is a somewhat under-appreciated contributor to the company's bottom line. But the unit, which provides financing to Ford dealers and customers, is quite profitable: It generated about $2.1 billion in pre-tax profit in 2015, and another $914 million in the first half of 2016.

That consistency hasn't escaped the boss's notice. "Ford Credit is a very important strategic asset for us," Fields said. "They not only help drive very high customer loyalty, they also generate consistent and less cyclical profits for the business." [Emphasis added.] 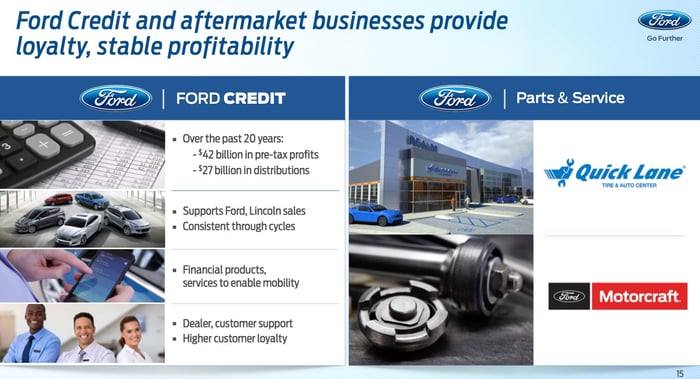 The steady flow of profits from Ford Credit helps to offset some of the ups and downs of Ford's core automotive business. But that customer loyalty is important, too -- and as Fields and other Ford executives explained, it will continue to be important as Ford moves into new "mobility" businesses enabled by advancing technology.

For example, Ford sees a significant potential opportunity in the management of autonomous-vehicle fleets, or what it calls "vehicle management as a service" (VMaaS). Ford Credit will play a big role, financing the purchase or lease of those fleets, and its strength and credibility could help Ford establish itself as a major player in that market as it emerges.

Ford Customer Service is another component of the future vision

Part of the opportunity for Ford Credit involves continuing to expand its offerings abroad, in Europe, China, and other Asia Pacific markets. That's also true of Ford Customer Service, which includes its parts and service businesses.

"Our Ford Customer Service division doesn't get a lot of attention, but this is a very important profit pillar for our company," Fields said. "And it's growing. To give you an example of that, our Quick Lane tire and auto centers, we have about 1,000 stores today. That's going to be growing by about 25% this year alone, and a lot of that growth is going to be in Europe and in Asia Pacific."

This is another quietly strong part of Ford that could play a more visible role as its VMaaS efforts ramp up over the next several years.

Laying the groundwork for a transformed future Ford

Ford is planning a major shift in its business, expanding into "mobility" opportunities enabled by the emergence of technologies such as self-driving vehicles and electric propulsion. All four of the "profit pillars" will help fund that shift, and all will remain significant businesses for a long time after it happens.

But Ford Credit and Ford Customer Service will be part of that shift as well, businesses that Ford will expand and evolve into (it hopes) major service providers in the self-driving future. The current strength of those businesses should give Ford a very good chance of success in a new and profitable line of business. We like that.