Its name is supposedly the second most understood word in the world, behind only "OK." It produces 3% of all beverages consumed on Earth. It's a company that transcends age, nationality, religion, and nearly any individual identifier you might choose. Of course, it's beverage titan Coca-Cola (NYSE:KO).

Unsurprisingly for a company of its seeming ubiquity, Coca-Cola's stock market history is as remarkable as the beverage giant itself. Worth just $25 million in 1919, Coca-Cola shares have soared in value to a market capitalization of roughly $180 billion today, and the stock has a powerful legacy of 53 years of consecutive dividend increases.

Crucially, the market data above only tells a fraction of the company's vaunted investment history, so let's delve deeper into Coke's stock history and see whether Coke shares are a buy today.

Coca-Cola and its stock market history

Having traded on public markets for nearly a century, Coca-Cola has enjoyed a history nearly as colorful as the iconic brand it controls. Created in 1886 by Atlanta pharmacist John S. Pemberton, Coca-Cola's signature beverage gained an almost immediate following, selling an average of nine drinks daily at Jacobs' Pharmacy in its first year; its secret ingredient -- cocaine, which was legal at the time -- may or may not have had something to do with its instantaneous popularity. Either way, Coca-Cola quickly flourished in the years following its founding. Coke's ownership also traded hands several times in its early days, eventually falling under the control of a group of businessmen, led by Ernest Woodruff, who in 1919 purchased the company for $25 million and conducted Coca-Cola's IPO.

From there, Coca-Cola rapidly expanded its global footprint. Having separated its syrup and bottling operations prior to its IPO -- a business model that remains intact today -- Coca-Cola created its first international arm in 1926 to sell its syrup to bottlers in Belgium, Bermuda, China, Colombia, Germany, Haiti, Italy, Mexico, the Netherlands, and Spain. The 1930s saw further expansion into Australia, Austria, Norway, and South Africa. By the late 1950s, Coca-Cola was sold in over 100 countries, and international sales comprised roughly one-third of the company's gross revenues.

Today, an estimated 1.9 billion servings of Coca-Cola products are consumed in over 200 countries. Coke owns 20 different Coke brands that each generate at least $1 billion in sales annually. The company is truly everywhere, and its skyrocketing share-price appreciation in recent decades also speaks to Coke's successful recipe for driving investment returns. 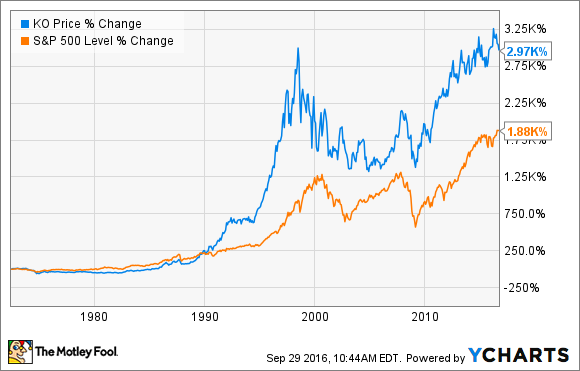 Along the way, Coca-Cola stock has attracted the attention of a particularly noteworthy investor, billionaire Warren Buffett, whose Berkshire Hathaway began purchasing Coke shares in 1988. Today, after additional purchases and stock buybacks, Buffett's company controls 9.3% of Coca-Cola's outstanding shares, making it the largest shareholder in the beverage powerhouse. More broadly, Buffett's interest in Coke speaks to the powerful economics of its business model.

Coke's business model involves producing the syrups for its various beverages, selling those ingredients to its bottling partners, and heavily marketing their products to consumers. As you might imagine, making and selling some of the most coveted syrups on Earth is a fantastically lucrative business. Case in point, Coke's operating margins and return on equity consistently hover above 20%, at times substantially besting that figure. However, the beverage world has changed to a certain degree in recent years, which has created some questions about Coca-Cola stock's long-term prospects.

To be sure, Coca-Cola's economics remain absolutely fantastic. However, the company must find ways to address the likely continued decline of soda consumption, which recently hit a 30-year low in the U.S. The reasons behind this are complex and not unique to Coke.

With obesity affecting over one-third of the adult population in the U.S., fast-food and soft-drink companies have become targets of criticism from public-health experts. In fact, Coca-Cola cites "obesity concerns may reduce demand for some of our products" as the first risk factor in its annual reports. As should be expected, though, Coke isn't sitting idly by as the ground shifts underneath it. The soft-drink giant is hard at work implementing a plan it hopes will allow it to not just survive, but actually thrive in our increasingly health-conscious world.

No single, clean solution exists to fix Coke's problems, just several smaller ones. In 2007, Coke launched its "venturing and emerging brands" group, which has invested in or helped acquire a number of smaller, healthier brands like Honest Tea and Zico coconut water. The company has also decreased its portion sizes in some products, renegotiated contracts with its bottlers to help adjust for the changes in portion sizing, and initiated a $1 billion marketing program to help "reintroduce Coke into today's more health conscious marketplace."

Though Coke's reinvention plans are seemingly workable on paper, the analyst community isn't necessarily sold. The 22 sell-side analysts covering Coke see the company's sales falling, on average, 6% this year and a further 14.5% next year.

To be sure, it will likely take years for Coca-Cola to fully reorient its business; turning headwinds into tailwinds takes plenty of adjustment. However, thanks to its unbelievable brand strength, its dominant distribution network, and its exquisitely profitable products, Coke should have the resources necessary to adapt to changing consumer preferences and to continue to drive returns for its investors for years to come.