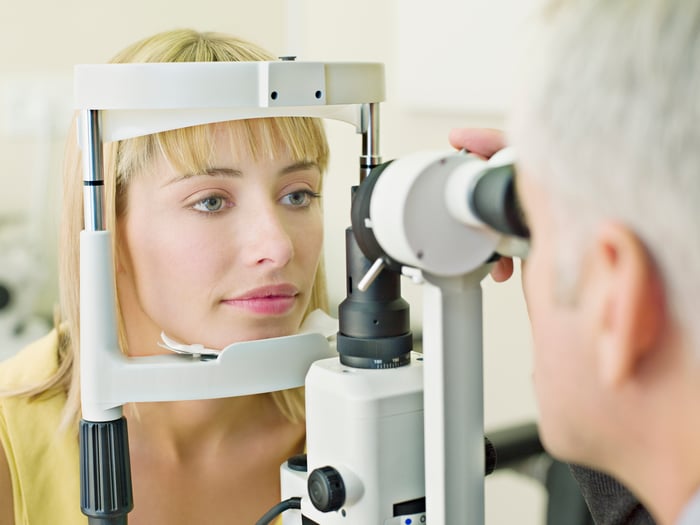 Shares of Ophthotech (NASDAQ:ISEE), a clinical-stage biotech primarily focused on diseases of the eye, are down by 13% as of 12:00 p.m. EDT on Friday.

The sell-off can be traced to less-than-stellar clinical data that was released on Friday by the biotech giant Regeneron Pharmaceuticals (NASDAQ:REGN).

Regeneron reported results from its phase 2 CAPELLA study on Friday. This trial was designed to test the company's blockbuster eye disease drug Eylea in combination with rinucumab, an internally developed anti-platelet-derived growth factor receptor beta (anti-PDGFR-beta) antibody. The goal of the study was to judge how well the combination therapy worked compared to using Eylea by itself in patients who had neovascular age-related macular degeneration (wet AMD).

While this study did not involve Ophthotech's lead compound Fovista -- itself an anti-platelet-derived growth factor (anti-PDGF) agent -- the markets now have a renewed worry that anti-PDGF treatments may not improve upon the current standard of care. Given that a lot of Ophthotech's $1.5 billion market valuation hinges on the future success of Fovista, investors are selling off shares on the news.

There's no doubt that this data raises new concerns about Fovista's potential clinical benefits. That puts an enormous amount of pressure on Ophthotech to deliver good news when it reports data from its phase 3 clinical trial evaluating Fovista in combination with Novartis' Lucentis in the fourth quarter. In phase 2b studies, the combination therapy showed a 62% improvement when compared to using Lucentis as a monotherapy, so if the longer-term phase 3 study produces results that are inconsistent with those results, then look out below.

On the other hand, this news could also be interpreted as a net positive for Ophthotech. After all, rinucumab was one of Fovista's potential competitors, so if it can succeed where rinucumab failed -- which is a huge if -- then it will likely have the market all to itself for quite some time.

Personally, I was bullish on Ophthotech's prospects prior to today's announcement, and I remain hopeful that Fovista's upcoming data readout will prove the skeptics wrong. If that happens, then shares will likely skyrocket.

Still, that's one heck of a binary event coming up, and today's announcement does provide a data point that should have shareholders feeling concerned. That makes Ophtotech a stock that only investors with an extremely high tolerance for risk should consider buying based on today's dip.