On Sept. 28, OPEC, the cartel of oil-producing nations that controls more than one-third of global oil output and over 70% of the world's proven oil reserves, shocked the markets with a surprise deal that would see its total oil production fall as much as 750,000 barrels per day. Oil prices have increased 10% since the news broke, and if the agreement makes it from OPEC's conference room to the actual oilfields, higher oil prices are a likely outcome.

And while it will take several months for things to play out with OPEC, now's a great time to start shopping for companies that will benefit if OPEC does cut output. Even better, the three stocks below are well-positioned to benefit, whether OPEC takes a more active role in driving up oil prices or not.

A producer sitting on a huge pile of cheap oil

U.S. independent oil and gas producer Pioneer Natural Resources (NYSE:PXD) has lost money for the past couple quarters after operating profitably in 2015. But Pioneer may have some of the best oil reserves in the world in the Midland Basin play in west Texas. Not only is the Midland Basin formation -- which is located on the eastern side of the massive Permian Basin -- potentially one of the largest oil fields in the world with an estimated 75 billion barrels of oil and gas, but many of the plays in which Pioneer has land holdings are incredibly cheap to produce from.

Pioneer is working hard to leverage this, having recently acquired even more acreage there. Pioneer is also planning to spend $2.1 billion in capital in 2016, largely on a mix of putting new rigs to work drilling in the Midland and investing in optimization of production from existing wells.

Pioneer doesn't really need OPEC to cut production and push oil prices up to make money in the Midland, which has economics that are competitive with nearly any oil play in the world. But if oil prices do increase from here, Pioneer would certainly benefit, making even more profits from this excellent play.

Higher oil prices could boost spending on this company's services

Core Laboratories N.V. (NYSE:CLB) sits in a relatively unique place in the oil and gas industry, in that it's a service provider, but not one that owns a lot of heavy equipment like drilling rigs or offshore vessels. Core Lab's business is largely based on its proprietary intellectual property, and long history of core analysis and expertise in helping producers maximize the recovery of oil and natural gas.

That puts Core Lab in a great position to see a surge in demand for its services if OPEC's production cuts happen, and boost global oil prices. Sure, Core Lab's services are important in any oil price environment, since producers must constantly find ways to get oil and gas out of the ground as cheaply as possible. But there's no doubt producers will spend more money when oil prices are up in an effort to grow production and capture a bigger piece of the more valuable pie.

And since a significant part of Core Lab's business is tied to reservoir description and other services tied to developing new reserves, the company would be one of the first to benefit from increased spending in the oil patch.

Clean Energy Fuels Corp (NASDAQ:CLNE) isn't an oil company, but oil prices play a central role in its business. Clean Energy is in the natural gas for transportation business, and is the leading supplier of fuel, stations, and station support services for the natural gas vehicles industry in North America. And oil is the biggest "competition" for the company, which sells its products as a cheaper, lower-pollution alternative to gasoline and diesel.

For years, the market has valued Clean Energy's stock closely with Brent crude: 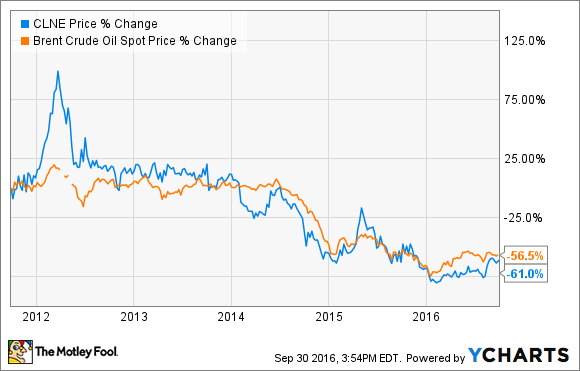 That is because cheaper oil means natural gas is less competitive as a fuel. And while that's been true to some extent when it comes to heavy-duty trucking, which has only added a few thousand natural gas-powered trucks over the past year, other industries, including public transit, solid waste, and other medium-duty applications including local delivery, have heavily shifted to natural gas. For instance, more than half of the trash trucks purchased in the past several years in North America were natural gas-powered, even as oil prices continued to fall.

That is a big reason why Clean Energy Fuels has been able to steadily grow its fuel sales volumes at near or above double-digit rates for the past five years, including the past two while oil prices fell. It's also a key reason why the company became profitable on a GAAP basis in 2016, and is moving steadily toward positive cash flows. The big opportunity remains heavy trucking, and higher oil prices would likely drive faster adoption of natural gas in this 30 billion gallon market, resulting in accelerated growth for Clean Energy while also sending its stock higher along with oil prices.

Solid choices whether OPEC cuts or not

The reality is, it's going to take months for this to play out, and it's probably unwise to invest in any company based on the potential of OPEC reducing its output. The good news with these three companies is that they are positioned to win big if it happens, but none of them need OPEC to cut production to be solid investments.