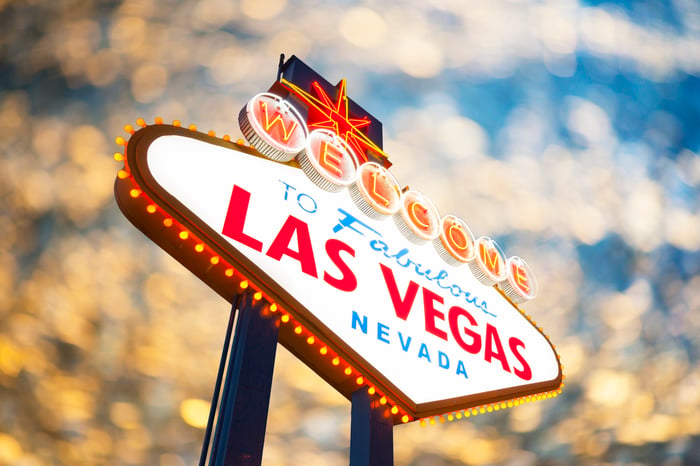 The biggest expense any casino company has is the construction of the resort and casino itself. Paying blackjack dealers, chefs, housekeepers, and all of the other costs that go into running a resort pales in comparison to the multibillion-dollar bill to build a modern Las Vegas mega resort today.

To offset the cost of building a resort, some companies have tried to offset their outlay by selling assets they don't think are core to their operations. And that simple idea is how the mall became a fuel that helped drive the last two decades of construction on the Las Vegas Strip.

The payday built in a mega resort

In a way, Caesars Entertainment (NASDAQ: CZR) started the mall craze at the Forum Shops at Caesars, although the property has been owned by the Simon Property Group (NYSE: SPG) for over a decade. But Caesars allowed an outside developer to come in to build the property instead of developing it itself and proving cash flows before the sale. Today, the Forum Shops are worth billions as one of the highest-grossing retail spaces per square foot in the U.S.

Las Vegas Sands (NYSE:LVS) was the first to really exploit the value mall operators saw in Las Vegas. The Venetian Las Vegas, completed in 1999 for $1.5 billion, sold the Grand Canal Shoppes for $1.4 billion to General Growth Properties (NYSE:GGP) in 2004, providing the model for how to use a mall to fund a resort and casino. Sheldon Adelson used the strategy again with The Palazzo Las Vegas, which sold its mall for $600 million.

It's no coincidence that soon after the Grand Canal Shoppes sale happened, a boom in construction took place. MGM Resorts (NYSE:MGM) started building CityCenter and The Signature at MGM Grand. The Cosmopolitan and Westgate Las Vegas (now owned by Hilton) broke ground as new companies entered the market. And the idea was always to sell off pieces of these assets to pay for construction, while keeping the casino for the developer.

MGM tried to use the strategy at CityCenter, which it owns 50-50 with Dubai World, when it sold the Crystals mall for $1.1 billion in an effort to pay off some of its construction costs for the $9.2 billion resort. But that was only part of the asset sale plan. 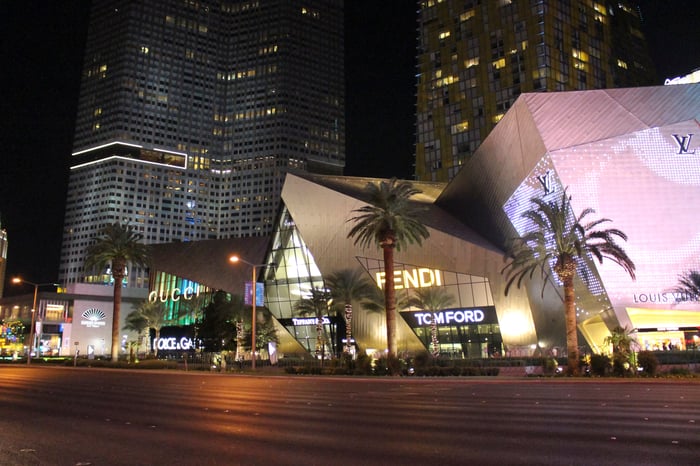 The sale of malls had become so successful by the middle of the last decade that casino companies tried to replicate the model by selling other pieces of the resort, namely space in the towers as condos. Instead of renting a hotel room on the Las Vegas Strip the developer could sell the condo for cash upfront and then charge a fee when the owner wanted to rent the condo out to a visitor.

Dozens of properties were planned with the mall/condo model in mind, but it hasn't worked out as planned for developers.

The theory was that, like malls, the condos could be sold to cover construction cost and the developer would keep the high-value casino for very little cost after condo proceeds. But when the financial bubble burst, there were few buyers left for condos and the ones left standing didn't want to pay a price that would have made them worth the sale. Properties were redesigned as hotel rooms and the model was largely abandoned.

The mall assets that had been so valuable simply didn't translate to the condo business. And it was an expensive lesson for developers to learn.

Not everyone followed the new model in Las Vegas

One notable holdout from the sale of mall or condo assets is Steve Wynn and Wynn Resorts (NASDAQ:WYNN). Wynn likes to retain control and cash flow from his properties and would likely shy away from selling condos in any resort he developed. But if he did sell the retail space, the proceeds would be on par with some of the most expensive real estate in the world.

They may not seem like it, but malls have become a cash generator that allowed developers to build bigger and better resorts on the Las Vegas Strip over the past decade. Maybe the sale of condos didn't work out as planned, but without the successful sale of malls and the idea that condos could be sold as well, The Strip wouldn't have as many mega resorts as we have today. It's a quirk in the region's history that shouldn't go overlooked.